Why Those Syrian Atrocities Still Matter 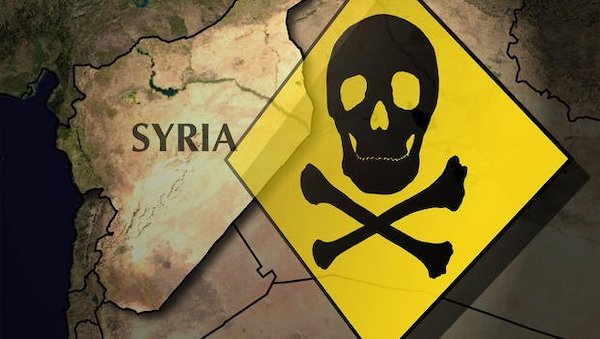 Facebook Twitter Flipboard
by Rafael Medoff Syrian atrocities
Dr. Medoff is founding director of The David S. Wyman Institute for Holocaust Studies (www.WymanInstitute.org) and the author of more than 20 books and several hundred essays about the Holocaust and Jewish history.
At a time when a deadly virus is ravaging the globe, the atrocities committed in recent years by the Syrian government might seem to pale in comparison. But they do, in fact, deserve our continuing attention.
The Organization for the Prohibition of Chemical Weapons last week announced that after an exhaustive study, it has concluded that the Syrian government used chemical weapons in its attacks on a rebel town in 2017.
The original reports at the time about the use of deadly sarin and chlorine in the attacks were what prompted the United States to launch missile strikes against the Syrian factories where the chemical weapons were produced.
There was bipartisan public support for that U.S. action, although isolationists and pacifists were united in outrage. Congresswoman Tulsi Gabbard (D-Hawaii) doubted that the Assad regime was responsible. Pat Buchanan, on the far right, said the U.S. had “no vital national interest” in taking action in Syria, and MoveOn.org, on the far left, called the missile strike “illegal.” The American Friends Service Committee (Quakers) declared, “It is not possible to end violence with more violence,” while Rebecca Erbelding, a historian at the U.S. Holocaust Memorial Museum, tweeted: “There are viable ways that the U.S. can aid those being persecuted under an evil regime. Bombing isn’t one of them.”
Pacifist dreams don’t always hold up well in the real world. Again and again, violence in defense of freedom has ended the violence perpetrated by evil regimes. Violence, not negotiations, put an end to Hitler, Mussolini, and Hirohito. Bombing certainly did aid those who were being persecuted—by eliminating their persecutors.
In more recent times, President Bill Clinton used airstrikes to put an end to atrocities in the Balkans. President Barack Obama used military force to preempt the plan by Libyan dictator Muammar Qadaffi to carry out what the president called “a massacre that would have reverberated across the region and stained the conscience of the world.” And Obama took military action to end the ISIS siege of thousands of Yazidi civilians in Iraq.
What the years-long investigation of Syria demonstrates is that Assad can be dealt with only through force, not negotiations. Four years before the aforementioned chemical attacks, Assad negotiated an agreement with the Obama administration and the Russian government, requiring him to surrender or destroy all his chemical weapons. Now we have evidence that he was lying.
The immediate, overwhelming problem of the Coronavirus has, understandably, distracted the international community from almost all other concerns. The findings of the Organization for the Prohibition of Chemical Weapons regarding Syria have not attracted the attention or response that they would have under ordinary circumstances.
Those who were concerned about the plight of Jews in Nazi Germany likewise had difficulty persuading the American public to take a sympathetic interest in the issue. In the 1930s, the severe impact of the Great Depression blunted the public’s humanitarian instincts.
A Gallup poll in the wake of the horrific Kristallnacht pogrom, in Germany in November 1938, found 94% of Americans disapproved of the violence, but 72% were against admitting more refugees. A poll in early 1939 found 67% opposed admitting even 10,000 children from Germany.
During the first years of World War II, public opposition to the admission of refugees remained strong, because of fears that Nazi spies might sneak in, disguised as refugees.
Eventually, however, public opinion began to change. The shift to a wartime economy completed America’s emergence from the Great Depression. And as the tide of the war turned in 1943—with the liberation of North Africa; the defeat of the Germans at Stalingrad; and the withdrawal of Italy from the war—the public’s fear of Nazi spies hiding among the refugees diminished, and its willingness to make humanitarian gestures increased.
The result: a Gallup poll in April 1944 found that 70% of the public supported giving “temporary protection and refuge” in the U.S. to “those people in Europe who have been persecuted by the Nazis.” Sadly, President Roosevelt did not take advantage of that shift in public opinion; he granted a temporary haven to just one token group of 982 refugees.
Sooner or later, the Coronavirus will subside, or an effective vaccine will be developed. As the crisis fades, other issues will begin to occupy our attention. The problem of evil regimes committing atrocities will return to the agenda of decent people everywhere. Understanding the true nature of the Assad government will be crucial in shaping a realistic and effective U.S. policy toward Syria.
Facebook Twitter Flipboard