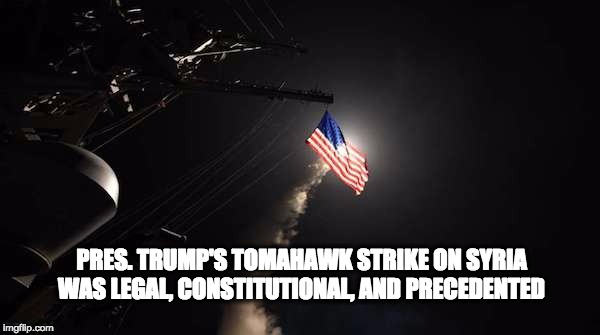 First, for my friends on the VERY far right who think Trump bombing Syria is unconstitutional… well, maybe it’s not! To all you Constitutional scholars, who or what better to look at than some of the people who actually helped write the Constitution?

Second, ONLY Congress has the power to declare war. The operative word being WAR! I would ask you, did President Trump declare or try to declare war on Syria? No!

Let’s look at one of the lessor known fellows who worked on the Constitution, Mr. Jefferson. Thomas Jefferson took action against the Barbary States, you know, those terrorist types that were taking ships hostage and holding them for ransom from the countries of origin. President Jefferson asked and received financing for 6 ships to be equipped to fight to protect our interests. No declaration of war was issued.

Jefferson went a bit further and sent our newly equipped ships to the Barbary coast and told them to “protect our commerce & chastise their insolence – by sinking, burning or destroying their ships & Vessels wherever you shall find them.” Action of war or protection? He wasn’t waiting to be attacked. He took action ahead of time.

Though Jefferson never went for congressional approval, he did keep them informed. The Pasha of Tripoli declared war on the U.S. in 1801. Jefferson sent the U.S. Navy there to protect Americans and American interest, however, he said, “Without the sanction of Congress, to go beyond the line of defense” that Congress alone could authorize “measures of offense also.” What he was saying is that for him to move forward in an “attack” mode, he would need a declaration from Congress.

Wouldn’t he know what the Constitution meant?

Many times in the past “war” or “protective action” has been taken by Presidents on both sides of the aisle. Were they all wrong? Korean War, Vietnam War, and although I wasn’t around, there was the “undeclared” War on France from 1798 to 1800. Just one of 125 more “wars” or “protective actions” that took place.

Though some say bombing Syria was unconstitutional, “The War Powers Resolution of 1973 gives the president the power to commit troops anywhere he likes for 90 days.” Section 2(c) provides that the president’s power to initiate military action is limited to “(1) a declaration of war, (2) specific statutory authorization, or (3) a national emergency created by attack upon the United States, its territories or possessions, or its armed forces.” And it also authorizes the president to introduce military force for up to 90 days for any reason at all. Then he must seek congressional approval to go on!

This act had no time limits and allowed the President to take action against Afghanistan since they harbored and supported organizations like Al-Qaeda, Taliban and other terrorist groups. Congress updated the act in 2002 and extended the powers under this act to also include removing Saddam Hussein in Iraq and other known supporters of terror.

Bush used these powers over 18 times and President Obama used them 19 times. It has been said that President Obama asked Congress to extend the AUMF to allow him to take action against Syria (even though he stated several times that he didn’t need their approval). Congress refused! He didn’t act. I believe he never had any intentions of going into Syria to help.

Enough with the “legalities” of everything. Let’s get to the “realities.” In 2013 when Obama threatened Bashar al-Assad that if he used chemical weapons there would be consequences. He never really stated what they would be. I guess it was to defriend Assad from his Facebook feed. He did nothing.

Over the years our allies realized under the Obama administration that they could count on zero support nor could they count on Obama coming through for them. Our enemies got used to the fact that they could do just about anything to us or our allies with nothing more than a stern warning from the Obama team. Real effective!

The action President Trump took the other day sent a monumental message.

First, let’s deal with those who said Trump was set up, that Assad didn’t do this, and it was ISIS (or whoever). Let me be clear. I don’t care. Assad has done many things over the last several years that he deserved to be punished for.

Next, think about the fact that as Trump was sitting there with the Chinese president he leaned over to say, we have taken action against Assad for his actions against his people. In one bombing, Trump told China “no more.” We won’t accept your phony islands or your inactivity in getting North Korea to back down.

And then we told Little Kim Jong-Un that he better have deep bomb shelters cause we ain’t going to take it anymore. We told Iran “we know where your plutonium processing plants are” and to stop screwing with our sailors. We told Russia we could now be more flexible, no wait that was Oblamo… We told Russia that we were not sitting it out and letting them run the show anymore.

Most importantly, we told our allies that we are back and engaged and that we were more than willing to help. We told our enemies that we were done allowing them to walk all over us and we reinforced it by presenting a budget that would get our military back to a point where they will have what they need to protect themselves.

But frankly since I am not a Constitutional scholar and can only go by what I know and what I read. And since I am completely unaware as to what the administration knows, I would rather err on the side of protecting America and American interests than argue about how much we skirted the Constitution.