But He Was Crazy Long Before Then 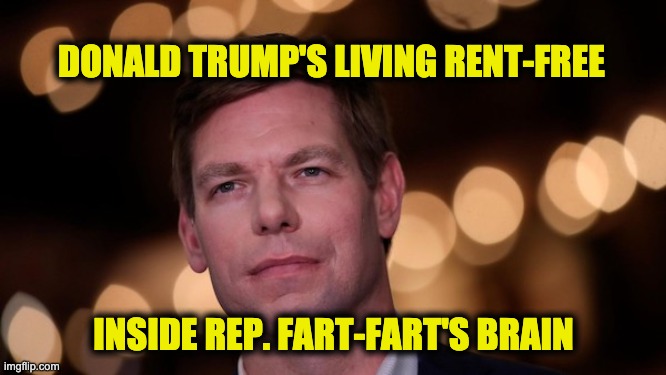 President Trump left the White House six weeks ago and has moved back to his Mar-a-Lago home. But this fact has been lost on the Democrats.  Trump is also living rent-free in the heads of many Democrats. After four years of failing to boot Trump out of office, they’re still attacking.  The latest attack comes from Fang-Fang’s friend and losing impeachment manager,  Rep. Eric Fart-Fart Swalwell (D-CA).

The new lawsuit filed on Friday by Swalwell, a California Democrat who helped to lead impeachment arguments against Trump for inciting insurrection, follows a similar suit filed last month by Rep. Bennie Thompson against Trump, Giuliani and the extremist groups the Oath Keepers and Proud Boys. Swalwell’s case makes some of the same claims as Thompson’s — citing a civil rights law meant to counter the Ku Klux Klan’s intimidation of elected officials.

(..) But it also alleges Trump, Trump Jr., Giuliani and Brooks broke Washington, DC, laws, including an anti-terrorism act, by inciting the riot, and that they aided and abetted violent rioters and inflicted emotional distress on the members of Congress.

For example, even after Robert Mueller filed his report that said neither President Trump nor anyone in the U.S. colluded with the Russians, Swalwell was on MSBC saying that the Mueller report revealed “evidence of collusion and coordination,” but not beyond a reasonable doubt. WRONG!

Even though the Mueller report was big news, even covered by the liberal media, Fart-Fart denied the existence of its conclusion.

Swalwell also displayed his mental issues in 2018 when he suggested that if gun owners fought against gun confiscation laws he wanted to be passed, the government would drop nuclear bombs on them.

Albert Einstein once said, “The definition of insanity is doing the same thing over and over again and expecting a different result.” One month ago, Swalwell was part of the Democratic team trying to boot Donald Trump out of an office he already left. They claimed the January 6th Capitol riot was caused by President Trump–they lost!  Now Eric Swalwell is going to a civil court trying to do the same thing and expecting a different result. More proof Rep. Fart-Fart Swalwell is crazy.

At Hot Air, Ed Morrissey explains the flaws of Swalwell’s suit from a legal angle.