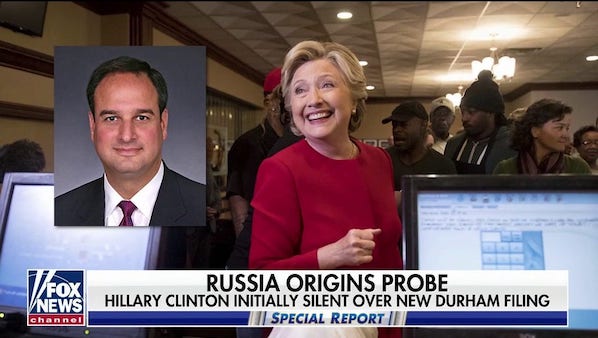 The Durham investigation plods along slowly, but it continues creeping forward. The latest battle between Durham’s people and Sussman is the Clinton-affiliated lawyer’s request to have courts dismiss the case against him. That case includes a charge of lying to the FBI. Durham has made a specific request for denial because it is claimed that Sussman not only lied to the FBI but that he did so maliciously. Without these particular lies, the politically-motivated allegations against Trump would likely have been recognized for the political gamesmanship they were and might never have precipitated an investigation.

In his latest court filing this weekend, Durham gave his most sweeping assessment yet about the consequences of Sussmann hiding the fact that he brought the allegation to the FBI on behalf of the Clinton campaign and a computer executive aligned with the campaign.

“Had the defendant truthfully informed the FBI General Counsel that he was providing the information on behalf of one or more clients, as opposed to merely acting as a ‘good citizen,’ the FBI General Counsel and other FBI personnel might have asked a multitude of additional questions material to the case initiation process,” Durham told the court in a memo filed late Friday.

“Given the temporal proximity to the 2016 U.S. presidential election, the FBI also might have taken any number of different steps in initiating, delaying, or declining the initiation of this matter had it known at the time that the defendant was providing information on behalf of the Clinton campaign and a technology executive at a private company,” he added.

This was no inconsequential act, nor should it be lightly dismissed.

Think about all the consequences that followed directly downstream from that Crossfire Hurrican investigation for years afterward. We note that most likely includes even the Midterm Election defeat that gave Pelosi the gavel and directly led to 2 impeachment attempts. The lingering dark cloud of suspicion also played havoc with Trump’s policy agenda.

Trump couldn’t even have his own AG running the show because he was recused and had a subversive Obama holdover actively undercutting his presidency.

If it turns out that Sussman really did play the central role Durham says he did in undermining the will of the people in favor of a private political agenda in an environment where public figures are proclaiming themselves the Great Defenders of Democracy™…?

Then Sussman himself should pay one hell of a price for such an outrageous crime against the people themselves. And so should anyone else involved in the scheme.