Did She Unmask Them Also? 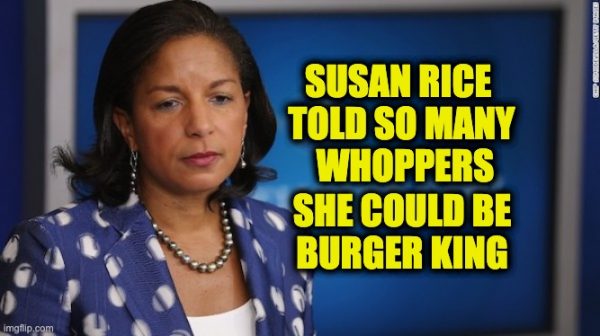 Serial liar Susan Rice suggested to Wolf Blitzer that the Russian government could be funding the violent left-wing riots taking place across the country.  Of course, she had absolutely no evidence for her claim.

Russia? Really? Sorry Susan but that train wreck left the station a long time ago. It’s time to come up with a different fake conspiracy theory.  Did you lose your tin foil hat?

Rice also pushed the unfounded theory that white supremacists and right-wing groups are behind some of the social discord.

“To designate antifa a terrorist organization, fine, but let’s also focus on the right-wing terrorists supremacists he called in the past very fine people. We have a problem here, Wolf,” she said.

Another Susan Rice lie, and Wolf didn’t confront her on it. The President’ never said the Neo-Nazis were very fine people.

Here’s the video of her Russia claim as posted on Twitter:

"This is right out of the Russian playbook" pic.twitter.com/luXiPV0bOq

Maybe she’ll blame all of it on a YouTube video as well.

Maybe not, Susan Rice rightfully got labeled as a liar when she spread that YouTube video whopper on every Sunday news show.

“You’re absolutely right on the foreign interference,” said Blitzer, “because we know for decades the Russians, when it was the Soviet Union, the communists, they’ve oftentimes tried to embarrass the United States by promoting the racial divide in our country.”

Well, we see it all the time,” Rice said.

“We’ve seen it for years, and, frankly, every day on social media, where they take any divisive painful issue whether it’s immigration, whether it’s gay rights, whether it’s gun violence, and always racism, and they play on both sides.”

Rice’s remarks are not the first time she’s floated an unfounded theory to explain an outbreak of violence that has led to the death of several Americans.

We can’t help but wonder what’s next. It’s too late for her to unmask anyone.

How can anyone believe her? After all, as Rep Matt Gaetz (R-Fla) said about Susan Rice, “if lies are music, she’s Mozart.”