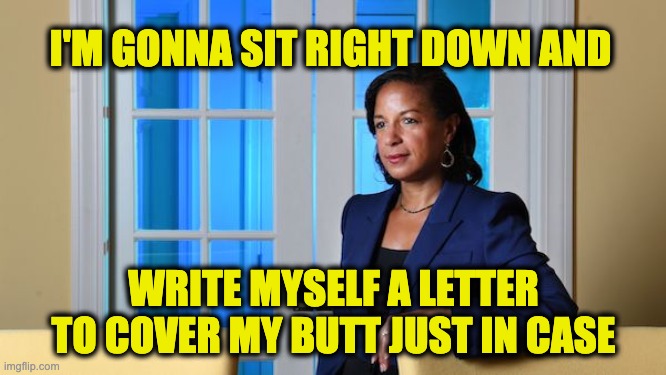 Thanks to a request by Sen. Ron Johnson (R-WI) and action by acting DNI Rick Grenell the full infamous Susan Rice letter was declassified. Written in January 2017 as President Trump was being inaugurated, the letter served the purposes of covering her arse about Russiagate, the first page has been released (embedded below) and the DOJ is reviewing the rest and it should be released soon.

On January 5th, 2017  President Barack Obama and VP Biden met with, FBI Director James Comey,  Deputy Attorney General Sally Yates, CIA Director John Brennan, Director of National Intelligence James Clapper and Susan Rice regarding Russian interference in the 2016 Presidential election.  According to the documents that were part of the DOJ brief about dropping the Michael Flynn charges, at this meeting Sally Yates “learned of the information about Flynn” and his conversation with Russia’s ambassador about sanctions. Not mentioned in the document was Susan Rice’s CYA (cover her ass) memo to herself about that meeting, literally written as Donald Trump was being sworn in as President.

Fifteen minutes after Donald Trump was sworn in as the 45th President of the United States Susan Rice, who had just become the former National Security Adviser sent out her last email using her official White House email account.  It was a strange email, about a meeting fifteen days before. The meeting was about Russian interference in the 2016 Presidential election. And according to Sen.Grassley (R-IA) included a discussion of the Steele Dossier.

The purpose of the email seemed to be to get on the record that the Obama administration did nothing wrong in the Russian investigation. She noted repeatedly how Obama emphasized during the meeting on Russian that he wanted every aspect of the issue handled “by the book.”

Prior to today, only part of one page of the letter was released to the public. Now the full page one has been released and the DOJ is looking at the rest before it is sent back to Congress for release. Below is page one and this post will be updated once the rest is approved by DOJ for full release.

The letter begins with a review of who was there, then it tried to provide cover for President Obama the national security team.

Looking back on the next sentence it seemed like a call for omerta.

“From a national security perspective, however, President Obama said he wants to be sure that, as we engage with the incoming team, we are mindful to ascertain if there is any reason that we cannot share information fully as it relates to Russia.”

The part of page one that was classified before today spoke about former FBI Director Comey and his “worries” about General Flynn:

“Director Comey affirmed that he is proceeding ‘by the book’ as it relates to law enforcement,” From a national security perspective, Comey said he does have some concerns that incoming NSA Flynn is speaking frequently with Russian Ambassador Kislyak. Comey said that could be an issue as it relates to sharing sensitive information. President Obama asked if Comey was saying that the NSC should not pass sensitive information related to Russia to Flynn. Comey replied ‘potentially.’ He added that he has no indication thus far that Flynn has passed classified information to Kislyak, but he noted that ‘the level of communication is unusual.’ The President asked Comey to inform him if anything changes in the next few weeks that should affect how we share classified information with the incoming team. Comey said that he would.”

Frequently? Flynn had two phone calls with Kislyak, that’s not frequent or unusual. Truth is, President Obama and his national security staff had it in for the General because he spoke the truth about the administration’s weak effort in Iraq and warned about the development of ISIS.

Read the entire page one release below:

rice doc page one by Jeffrey Dunetz on Scribd