Do Liberals Think Susan Collins Got A Sex Change Operation? 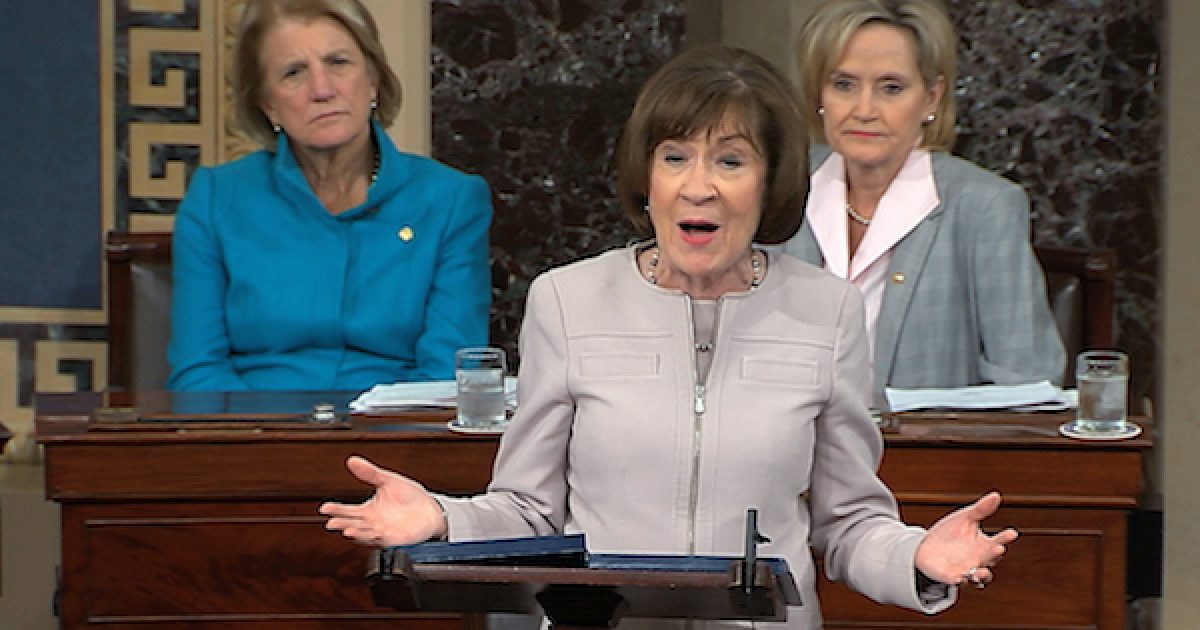 Did Susan Collins have a sex change operation? Because according to one crazy liberal, the Senator From Maine is no longer a woman. Increasingly insane liberals became even more insane after Sen. Susan Collins, R-Me., gave a well-thought speech highlighting her reason for supporting Judge Brett Kavanaugh’s confirmation to the Supreme Court.  One of those who apparently suffers from the brain-eating version of Kavanaugh Derangement Syndrome is General Hospital actress Nancy Lee Grahn, who declared that Collins isn’t really a woman, despite all evidence to the contrary.

“You may have female parts but you are no woman @SenatorCollins and we who are don’t want anything to do with you,” she said on Twitter.

You may have female parts but you are no woman @SenatorCollins and we who are don’t want anything to do with you. https://t.co/XUt5Yk3Ahu

Look I got a 98 on my biology regent exam in High School—I learned that If a human has female parts and “XX” chromosomes she’s a woman.

Besides wasn’t it the liberals who first called Bruce Jenner–>Caitlyn Jenner once she took enough female hormones and had her ding-dong cut off?  How then can a liberal claim that Susan Collins is not a woman?

The Soap Opera actress (as opposed to a real actress) received some very unpleasant tweets in response to her Susan Collins gender reassignment.

No, the real women are damn proud of Collins. Clearly you didn’t pay attention in school or you might have the slightest idea of how government and the justice system works.

Oh, Nancy, you have some ‘splaining to do!

And people think men are the problem… It looks like women are doing a fine job dehumanizing other women without any help from men. ????

Agree completely. This whole women need to stick together and empower each other is complete BS. Stick together until she disagrees with you then it’s let’s revert to the high school mean girl club. Bullying someone because you don’t agree is still bullying and it is not okay.

She is a woman. And for you to say she is not her own gender is abusive and narcissist. People will disagree with you. It doesn’t mean you have the right to attack them based on gender.

Oh Nancy, you don’t speak for all women, in fact you sound so ridiculous I’m embarrassed that we share the same gender. We are proud of Senator Collins.

Does that mean she can keep her female parts?

Women should be celebrating @SenatorCollins for her courage and strength to satand by her principles when she is under extreme pressure from special interest groups and liberals. She is my #HERO

Anti-American, Anti-Semitic Linda Sarsour claims that Collins’ vote wasn’t motivated by the fact that she was no longer a woman, but because she was a white woman.

“She is a disgrace [and] her legacy will be that she was a traitor to women and marginalized communities. History will not treat her kindly,” Sarsour said in a statement.

Senator Collins was on Face The Nation and said:

“I am convinced that Dr. Ford believes what she told us and that she was the victim as a survivor of sexual assault and that, that has been a trauma that has stayed with her for her entire life. But we have a presumption of innocence in this country. And when I looked at the lack of any corroborating evidence – including no evidence from her very best friend who was present at the party I could not conclude that Brett Kavanaugh was her assailant,” she said.

Sen. Susan Collins (R-Maine) insulted Christine Blasey Ford by suggesting the psychology professor is confused about her assault. “She says that Dr. Ford thinks that she was assaulted, which is even more insulting than saying that she gave a very credible account,” Hirono told CNN on Sunday of her GOP colleague, who helped pave the way for Kavanaugh’s confirmation by a 50-48 Senate vote on Saturday.“To say that she thinks that Dr. Ford thinks that she was assaulted, what is that? Is she mistaken?” Hirono said, adding that “anybody watching” Ford’s testimony would conclude she was being truthful about her story.

YOU SEE! If Crazy Mazie didn’t think Susan Collins was a woman she would have told her to “Shut up and step up” after all that’s what she said to all men three weeks ago.