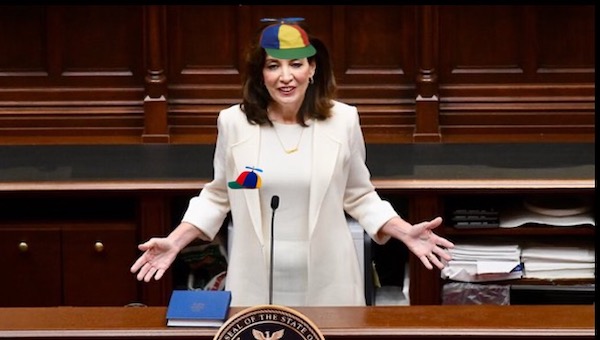 About 24 hours before the Supreme Court dropped the hammer on abortion Friday, the gang of nine also offered an important 6-3 decision.

I can do no better than Charles C.W. Cooke’s eviscerating George Will’s disagreement with Justice Clarence Thomas, but let’s also realize: that the high court’s ruling declared New York violated the Second and 14th Amendments because these amendments establish a right to keep and bear arms, particularly for self-defense. New York’s restrictive, century-old system treated self-defense as a privilege instead of a right, which made it proper for honest justices to strike it down.

Democrats were apoplectic over the decision, exuding the expected hyperbole, all the while displaying their unrelenting constitutional ignorance.

“This decision isn’t just reckless. It’s reprehensible. It’s not what New Yorkers want,” embattled New York Gov. Kathy Hochul ranted. “If the federal government will not have sweeping laws to protect us, then our states and our governors have a moral responsibility to do what we can and have laws that protect our citizens.”

Vacuous leftists like Hochul, who once was pro-gun but flipped for political expediency, argue the Supreme Court is infringing on her constituents’ rights to determine their own public safety policies — or some form of that argument?

It’s rather unconvincing. Restricting absolute democracy is literally the point of the Bill of Rights. Go back to 8th grade, Kathy.

While our republic gives people the ultimate power over government, the Bill of Rights specifically serves to curb the will of the majority when it comes to individual rights. The idea was that some practices cannot occur, even if 50.1% of the population hopes they do. Any teacher worth his or her paycheck should have told their students that direct democracy leads to a tyranny of the majority.

If not, abhorrent practices like slavery, segregation, and more would have obtained majority support among voters. We added amendments to remove these injustices.

The right to defend your life should be an inherent human right, and it’s absolutely recognized within the Second Amendment. And the very point of the Bill of Rights is that such rights should not be debated at the federal or local level.

The Supreme Court’s decision Thursday was as needed and welcomed as their historic move Friday. Last week was a good week for American jurisprudence.