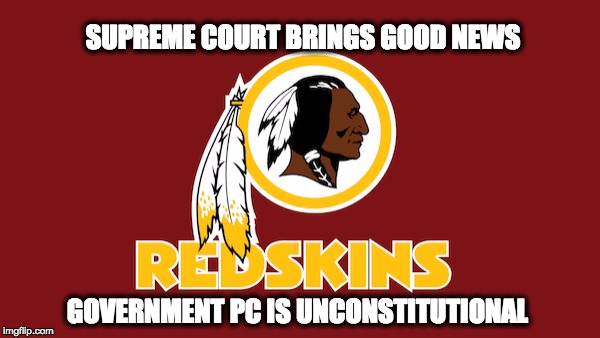 In a decision that may end up allowing the Washington Redskins maintain their trademarks, the Supreme Court ruled Monday the federal trademark law banning offensive names is unconstitutional. In this particular case the court sided with a Chinatown dance rock band named The Slants,  whose name had been deemed racially disparaging by the U.S. Patent and Trademark office.

In 2014 the U.S. Patent and Trademark Office used that same clause to cancel the Washington D.C NFL team’s six trademarks on the name “Washington Redskins,” based on the same law (the Redskins case is working its way through the courts).

In a unanimous 8-0 decision (the decision was made before Justice Gorsuch joined the court), the Supreme Court ruled the law’s  “disparagement clause” violates the free speech clause of the First Amendment.

“The Slants,” a band based in Oregon, and composed of Asian-Americans was denied a trademark because its name was deemed offensive.

“The commercial market is well stocked with merchandise that disparages prominent figures and groups, and the line between commercial and non-commercial speech is not always clear, as this case illustrates. If affixing the commercial label permits the suppression of any speech that may lead to political or social ‘volatility,’ free speech would be endangered,” he wrote.

Alito cautioned in his opinion that the government still “has an interest in preventing speech expressing ideas that offend.”

But he suggested the clause in question was too sweeping: “The clause reaches any trademark that disparages any person, group, or institution. It applies to trademarks like the following: ‘Down with racists,’ ‘Down with sexists,’ ‘Down with homophobes.’ It is not an anti-discrimination clause; it is a happy-talk clause. In this way, it goes much further than is necessary to serve the interest asserted.”

According to the band, the name Slants was chosen for a similar reason that this writer chose Yidwithlid as the initial name of Lidblog

Slants founder Simon Tam said his goal was to reclaim a derisive slur and transform it into a badge of ethnic pride. But the trademark office said a term can be disparaging even when used in a positive light. A federal appeals court had sided with the band, ruling that the law violates the First Amendment.

While nothing is certain, this ruling should also mean that the U.S. Patent and Trademark Office has to give the Redskins back their trademarks, and NY Giant fan won’t have to hate a different team nickname.

The Redskins attorney agrees with the analysis above: 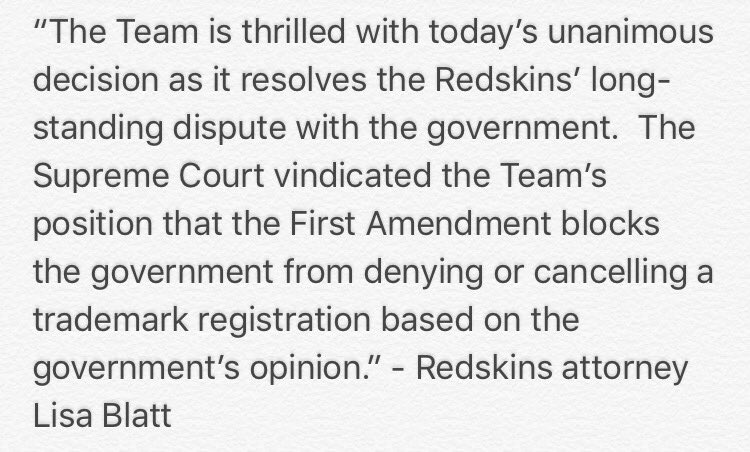