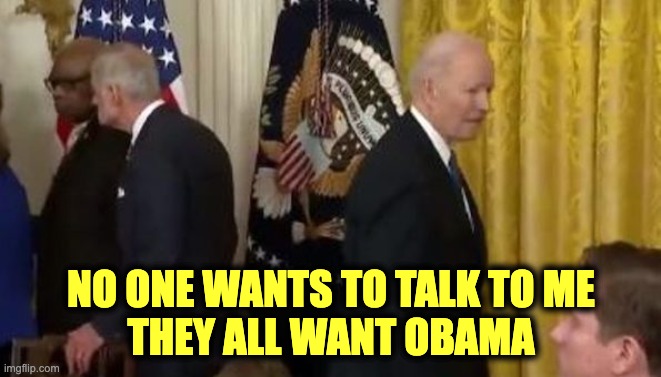 This is how we’re supposed to report this, right?

On Tuesday, Obama was at the White House, where a whole lot of people wanted to see the President.

As the Babylon Bee put it…

I mean… we’re all thinking about it, right? It’s what Obama said he wanted to do — have a third term making the decisions but with someone else out front as the face of the administration.

Seriously, though, people were very excited to see Barry and not so much the Shambling Husk of Mediocrity that occasionally trotted out for 30 minutes with several cue cards and teleprompters.

Democrats were celebrating that they had “fortified the election” in 2020, and that guy received 81 million votes as a result. A year and a half later — no one wants to talk to him.

But what’s interesting is that after the big, indoor gathering on Tuesday, several high-profile triple-vaxxed Democrats all tested positive for COVID.

A growing number of Washington officials have tested positive for COVID, including two Cabinet members, two White House staffers, and at least 13 members of Congress.

Harris was in “close contact” with her communications director who tested positive, but she presided over Jackson’s vote in the Senate chamber without a mask just two days later. According to CDC guidance, someone deemed a close contact should “wear a well-fitting mask for 10 full days any time you are around others inside your home or in public.”

“After consulting with a White House physician and reviewing CDC guidance, which we do for all engagements, the Vice President presided over the Senate while practicing social distancing — with limited and brief interactions from her chair. In addition, the Vice President tested negative today, and will continue to maintain strong protocols and follow the CDC’s guidance,” a White House official told ABC News.

If Biden is relying on the jab to protect him, well, that’s not “the science” anymore.

With the waning efficacy of the vaccines, this could be bad news for the 79-year old POTUS who can’t stop rubbing his face, coughing into his hand, and getting uncomfortably close to women and children.

For what it’s worth, Biden received his second booster on March 30, but there is a delay from the shot to “full protection” — whatever that means when he’s just getting another dose of the same thing he got in late 2020.

Speaker Pelosi, who recently tested positive for the virus, was around Biden twice this week — once where the pair did that kiss each other on the cheek thing, but that wasn’t “close contact,” according to the White House.

Well…either that or he followed a different science. The one that says if Pelosi kisses you on the cheek, make sure to wash it with soap and steel wool.

Now COVID-POSITIVE Pelosi kissed Biden on the cheek Tuesday before grabbing Obama’s hand and putting it on her MOUTH.

Kisses on the cheek aren't "close contact" according to the Biden administration. @pdoocy pic.twitter.com/JiC9aYgNP8

So, the Vice President doesn’t have to wear a mask in the Senate Chamber despite the CDC recommendation for “close contacts” to do so. Still, according to the CDC, the two Ancient Ones slobbering on each other isn’t “close contact” because it wasn’t sustained for 15 uncomfortable minutes, and that’s “the science” now.  Alrighty.

It’s funny how the CDC rules can be applied and discarded by the administration whenever it’s most convenient, eh?

And yet, with the long list of Dems getting the ‘Rona, the administration has decided to go ahead with the celebration of the “historic” nomination of Ketanji Brown Jackson to the Supreme Court.

…cluster of positive COVID cases since Monday, including some like House Speaker Nancy Pelosi who have had contact with Biden, has raised questions about whether the celebration could turn into a superspreader event…

…The White House insists it won’t be a repeat of former President Donald Trump’s infamous and maskless Rose Garden event in October 2020 at which he nominated Amy Coney Barrett to the court, but with hugging and maskless photos likely as part of Friday’s festivities, the White House risks appearances at odds with CDC protocols and public messaging it has touted…

…Some 200 guests were invited to Friday’s ceremony including Jackson’s family, all current and former Supreme Court justices, Cabinet members, some members of the House, Democratic members of Congress from Florida — Jackson’s home state — and all 53 senators who voted for Jackson’s confirmation. No justices will attend, however, ABC News has been told.
Source: ABC News

IRONY ALERT: Biden claims "what Judge [Ketanji Brown] Jackson was put through was well beyond" "painful and difficult," but instead "verbal abuse, the anger, the constant interruptions, the most vile, baseless assertions and accusations." pic.twitter.com/pggkIeVCn3