The Doctors Gave The Trip Their Blessing 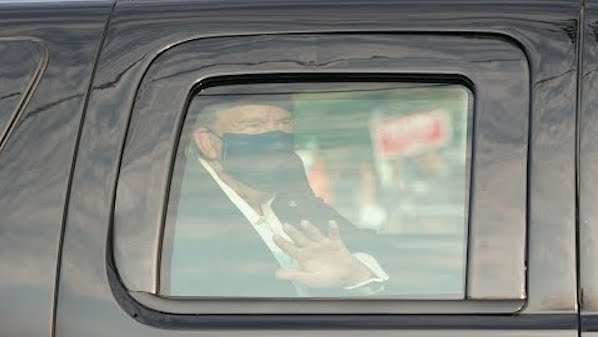 He looks better each day.  His Doctors say he may be released on Monday. I pray he continues his quick recovery and the COVID is entirely gone soon. Sunday evening Trump tweeted out the video below:

The Surprise the President was talking about was he took a ride around the Hospital to wave at his supporters who were cheering on his recovery.

Trump drives by the press and supporters outside Walter Reed hospital. pic.twitter.com/3phtKthqTH

The “little surprise” Trump teased? A ride outside of Walter Reed: pic.twitter.com/FZx0lKR810

It was his way of keeping them healthy while thanking them for their support.

But the liberal media went crazy. They weren’t told about the President’s thank you ride, and they complained that Trump was putting people in danger…but not according to his doctors who gave the President permission.

The President’s doctors approved his drive-by supporters outside the hospital this afternoon. “The movement was cleared by the medical team as safe to do,” @JuddPDeere45 tells CBS News. “Appropriate precautions were taken” to protect the Pres and all supporting his motorcade. pic.twitter.com/FLJQW04HZG