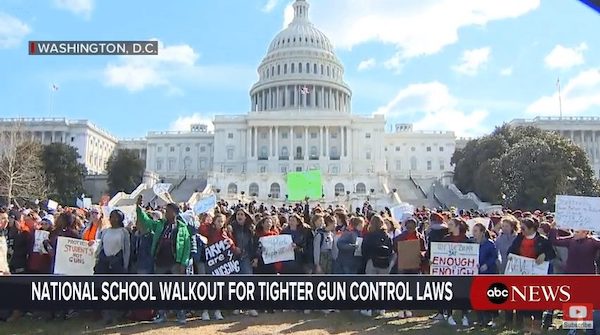 An offshoot of anti-gun billionaire Michael Bloomberg’s Everytown for Gun Safety and Moms Demand Action gun prohibition lobbying organizations is calling for volunteers to mobilize to elect so-called “Gun Sense Candidates up and down the ballot.”

Translation: They want to elect anti-gun-rights liberals at every level of government Nov. 3.

An email blast with a letter over the name Makayla Jordan, national advisory board member of Students Demand Action, revealed the effort Thursday.

“With your help,” the message says, “we can elect leaders who will prioritize common-sense gun safety legislation, who will recognize that police violence is gun violence, and who will work to defeat the NRA’s extreme agenda.”

For a look at an “extreme agenda,” gun rights advocates suggest reading Democrat Joe Biden’s scheme dubbed “The Biden Plan to End Our Gun Violence Epidemic.” It includes a ban on semi-auto rifles, gun registration and licensing, one-gun-per-month restrictions, storage mandates, so-called “universal background checks,” repeal of the Protection of Lawful Commerce in Arms Act, and much more; more than 3,500 words worth of gun control.

This new effort involving youngsters comes as the race for president tightens dramatically. According to Rasmussen Reports, the daily White House tracking poll on Thursday has Biden at 48 percent and President Donald Trump at 47 percent. It was just the opposite one day before, and the lead has been bouncing back and forth for days.

Among the Democrats anti-gunners want to support is Washington Gov. Jay Inslee, running for a third term after months of what critics call ineptitude trying to guide the state through the COVID-19 pandemic panic. Inslee, who quit Congress early to run for the governorship that Christine Gregoire was leaving, has been no friend to gun owners in his state. About one in nine Washington adults is licensed to carry. Inslee is getting a spirited challenge from Republic Police Chief Loren Culp, a populist candidate from Eastern Washington who many think has more momentum than pro-Inslee Seattle media cares to acknowledge.

Inslee got what has to be one of the strangest endorsements from a newspaper in recent history.

The Spokane Spokesman-Review wrote, “There’s a lot to worry about with another Inslee term, not least that the governor has seemed more focused on national and global issues than on the issues hitting his own state the hardest. He has spent more time running for president and railing against climate change than addressing homelessness, a far more critical concern to the state.”

And the backhanded “praise” didn’t stop there.

“The distracted governor also remains oblivious to big and small business concerns outside the Puget Sound, especially agricultural industries,” the newspaper said. “He is beholden to public employee unions and an opponent of education reform and accountability.

“During the COVID-19 pandemic, Inslee led by executive order far longer than necessary rather than work with lawmakers,” the endorsement added. “On his watch, the Washington Employment Security Department flailed and got ripped off by scammers.”

A quick check of history showed Washington’s Employment Security Department was bilked out of “hundreds of millions of dollars” in unemployment benefits on Inslee’s watch.

While noting Inslee has experience Culp lacks, the endorsement ended sarcastically, “Washington at least knows what it’s getting with him.”