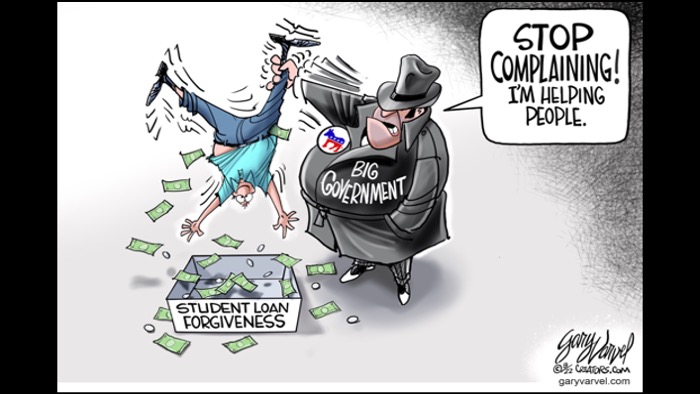 “I still cannot believe this student loan debacle. This may be the worst thing I’ve ever seen. I’m furious. And I’m a centrist.”

That’s an email I received a week ago from a friend in Pennsylvania with two children in college. I can think of several more from independents and apolitical who expressed similar fury. The egregious move from President Joe Biden to “forgive” college loan debt really irked people because it’s so transparently odious, blatantly political, and antithetical to American values.

Biden’s unpopular decision to pilfer over a half-billion from everyday folks — plumbers, electricians, oil rig operators — and send it to mostly wealthier people — therapists, baristas, schoolteachers — is what many Americans are discussing as summer concludes.

They may first ponder why John Q. taxpayer must help with someone else’s privately held debt. Is the dubiously legal move purely a gambit to garner Democrat votes among ignorant millennial and Gen Z types in the midterm elections? Could it be better to finally tax the university’s massive endowments? All of the above work better than loan forgiveness, and some Democrats know higher education is gouging the public and the White House erred.

“There isn’t free money out there. There are consequences,” former Obama economic adviser Jason Furman recently told the Atlantic. “Once you frame it as 320 million people paying for a benefit for 30 million people, it makes you think a lot harder. You’re giving a benefit to someone making $200,000 a year. How important is it to give them relief?”

Despite this reality, the most significant business in America raises tuition yearly, partly because government-run loan programs ensure enrollment never decreases, even with extravagant costs that have risen 180% in the last 40 years.

With help from media allies, colleges have convinced the public that one cannot survive without a diploma, even as the complete picture shows this has never been less true.

Many college graduates earn less than blue-collar employees. I see it as a journalist covering railroad and factory workers who make more money than I do and accrue no debt. On the other hand, most college graduates are stuck in debt for decades.

As many university endowments skyrocket into the billions, why does tuition increase? One culprit is that the number of administrators — many taking six figures annually — has soared.

Over the past few years, hundreds of millions have also been thrown into noxious “Diversity, Equity, and Inclusion “programs, which divide students over irrelevant attributes and promote cancel culture, bigotry, and anti-Semitism.

Let’s be frank: Most universities are bloated bureaucracies primarily concerned with increasing power. Meanwhile, their “consumers” — the students — are manipulated and deprived of an education they were supposedly promised when coughing up years of salary. No wonder there’s a growing recognition that a college education has been substantially diminished.

One prime reason is that too many degrees lead to limited career opportunities.

Majoring in supply chain management may not seem exciting, but it provides a better future than lesbian puppetry.

Parents must finally stop obsessing over what college bumper sticker they can affix to their vehicle. When touring campuses, don’t waste time gawking; check what administrators are earning to better understand how campus corruption is robbing the successful futures of your college graduates.

Back in the early 1980s, administration comprised only about one-fourth of total spending by colleges, while instructional spending comprised over two-fifths. The latest reports show the categories are now basically even, around 40%. Federal data also shows that “managerial” employees on campus have grown at least 20% during the last two decades, far outpacing students and faculty.

How does this increase benefit families paying increasingly exorbitant tuition? In no way at all. Biden and Democrats can “forgive” loans all they want, but left-wing elitism created this debacle.

A.J. Kaufman is a columnist for Alpha News and here at The Lid
student loan debacled
Facebook Twitter Flipboard