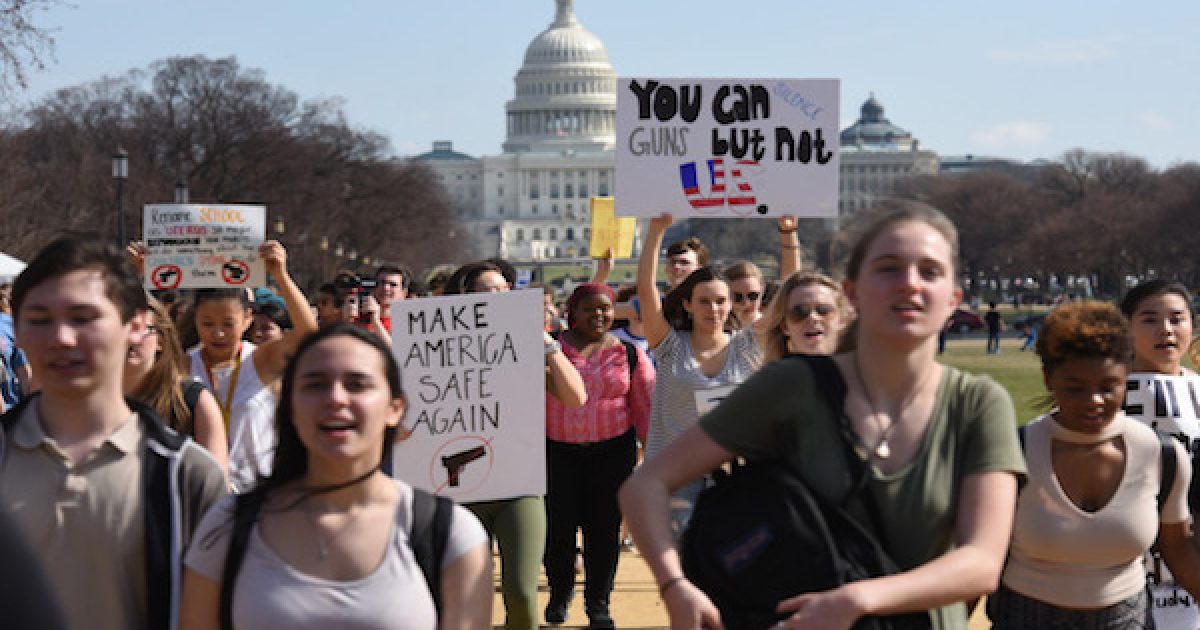 At the risk of being called cold or harsh, let me begin by saying every American has a right to his/her opinion on just about any issue. Including gun control.

Now that we’ve got that out of the way, let me add this: the people playing partisan politics on the graves of the 17 innocent dead people from Douglas High School are despicable. I don’t care what age they are.

Over the last couple of weeks, a variety of conservative voices have gotten in trouble for insinuating that the anti-gun protesters coming out of Douglas High School seem far too practiced to simply be grieving students.

Benjamin Kelly, a district secretary for Florida GOP Rep. Shawn Harrison, was fired after wondering if the anti-gun students were actually just “crisis actors.” Yes, Kelly went too far. Yes, he spoke too soon about a subject that was far too raw, and he should have known better. But in his defense, the anti-gun student leaders simply seemed too prepared to respond to such a horrible disaster.

Once the students were proven to not be “crisis actors,” others began to wonder if they had someone training them.

‘Of course not,’ we were told.

The students were “born online,” so they’re better able to handle the media spotlight, and Douglas High School simply has an excellent debate program, which helped prepare these kids to speak in public about important issues. I kid you not. The Miami Herald seemed to actually believe that a school debate program could prepare grieving children to speak on international television in such a calm and direct fashion as to make everyone wonder if they’d done this before.

When students at Marjory Stoneman Douglas High debated gun control in class last November, they never imagined they were preparing to lead a national discussion on how to prevent school shootings…

And it’s not just the students at Stoneman Douglas. Since a gunman opened fire at the high school last Wednesday, killing 17 people, teenagers from across Broward County have joined the call for stricter gun control policies. They have been praised for their composure and well-articulated arguments, which often appear so polished they have fueled conspiracy theories that the students are “crisis actors.”

But what really explains the students’ poise, said Broward Schools Superintendent Robert Runcie, is the school district’s system-wide debate program that teaches extemporaneous speaking from an early age. Every public high school and middle school in the county has a debate program, along with more than two dozen elementary schools. It’s one of the largest debate programs in the country — and, amid the heartbreak, it has helped Broward students position themselves on the front lines of the #NeverAgain movement.

“I’m like a parent that is just beaming with pride in terms of how they have been able to express themselves, how they’ve exhibited a kind of courage that everybody needs to have and how they’re working to reclaim their future and do what they know is right,” Runcie said. “In some ways it seems like we’ve been preparing our kids for this moment without realizing it.”

It’s ironic that Broward Schools Superintendent Runcie is “proud” of his leftwing students since it’s his leftwing policies that caused this horrible incident in the first place.

To keep students in school and improve racial outcomes, Broward school Superintendent Robert W. Runcie – a Chicagoan and Harvard graduate with close ties to President Obama and his Education Department – signed an agreement with the county sheriff and other local jurisdictions to trade cops for counseling. Instead of the criminal justice system, students charged with various misdemeanors, including assault, were referred to counseling, which included participation in “healing circles,” obstacle courses and other “self-esteem building” exercises…

“The [achievement] gap becomes intensified in the school-to-prison pipeline, where black males are disproportionately represented,” he said at the time. “We’re not going to continue to arrest our kids,” he added. “Once you have an arrest record, it becomes difficult to get scholarships, get a job, or go into the military.”

Nikolas Cruz’s rampage suggests the limits of this approach.

A repeat offender, Cruz benefited from the lax discipline policy, if not the counseling. Although he was disciplined for a string of offenses — including assault, threatening teachers and carrying bullets in his backpack — he was never taken into custody or even expelled. Instead, school authorities referred him to mandatory counseling or transferred him to alternative schools.

By avoiding a criminal record, Cruz passed a federal background check in February 2017 before purchasing the AR-15-style semiautomatic rifle investigators say was used in the mass shooting. Just one month earlier, he was disciplined with a one-day internal suspension for an “assault” at Marjory Stoneman Douglas High School and evaluated as a potential “threat.” It was his second offense for fighting in less than four months, but campus police did not make an arrest in either case — as they typically did for repeat offenders under the district’s prior zero-tolerance policies, a review of the official “discipline matrix” used last decade reveals.

The upshot was that the lack of an arrest record made it difficult for police to confirm that Cruz was a proven threat and to intervene when they received call-in tips and complaints from neighbors, classmates and relatives about his stockpiling of weapons and desire to kill people, law enforcement officials say.

A little more than a month before the Feb. 14 shooting, the FBI hotline received a tip about Cruz being a potential school gunman, but it failed to take action. If he had been previously arrested and booked for the on-campus misdemeanors, the FBI intake specialist handling the call would have seen his violent history in the federal NCIC database, which includes all state arrests, convictions, warrants and alerts.

“Once the agent, or any officer, entered his name in the NCIC system, his history would have been viewed,” Biasello said.

Though he said the call was “specific and urgent” enough to pass the information on to the bureau’s Miami field office, “the message might have been taken more seriously and escalated up the chain of command if the search turned up a police record.”

And, no, the debate program isn’t why these students are able to live in the glare of the camera lens.

Buzzfeed was finally able to dig to the truth and found that these kids were indeed being coached, and not just coached, but also funded and elevated by their leftist idols.

David Hines at the Federalist explains:

On February 28, BuzzFeed came out with the actual story: Rep. Debbie Wassermann Schultz aiding in the lobbying in Tallahassee, a teacher’s union organizing the buses that got the kids there, Michael Bloomberg’s groups and the Women’s March working on the upcoming March For Our Lives, MoveOn.org doing social media promotion and (potentially) march logistics, and training for student activists provided by federally funded Planned Parenthood.

The president of the American Federation of Teachers told BuzzFeed they’re also behind the national school walkout, which journalists had previously assured the public was the sole work of a teenager. (I’d thought teachers were supposed to get kids into school, but maybe that’s just me.)

In other words, the response was professionalized.

So, who’s bankrolling the lefty kids from Parkland, Florida? It’s a veritable “Who’s Who” of leftwing money from Michael Bloomberg, to George Soros, to the baby killers at Planned Parenthood. (Emphasis is mine.)

Several large progressive organizations, donors, and a high-powered public relations firm are backing the March for Our Lives movement, which is quickly evolving from a student-run social media effort to end gun violence into one backed by some of the most influential activists in the country…

Since then, major players and organizations — including Everytown, Giffords, Move On, Planned Parenthood, and the Women’s March LA — told BuzzFeed News they are helping the students with logistics, strategy, and planning for next month’s March for Our Lives rally and beyond. Much of the specific resources the groups are providing to the Parkland students remains unclear — as is the full list of supporting organizations — but there are broad outlines.

Giffords, an organization started by former US Rep. Gabrielle Giffords that fights gun violence, is working with Everytown and Moms Demand Action for Gun Sense in America to plan the main march on Washington — as well as sister rallies across the country…

MoveOn said it will encourage its millions of members to follow and promote the March for Our Lives movement on social media and attend the rally next month. The group said it had offered support in organizing logistics such as security and portable toilets, but it is unclear if the students have taken them up on their offer.

A spokesperson for Planned Parenthood said the group is “teaching and hosting trainings” for young activists across the US “to keep momentum going so they don’t get burned out.”

Planned Parenthood said it has been in contact with Giffords, which is spearheading the national coalition of groups working with March for Our Lives…

In addition to the millions of dollars raised by A-list celebrities including Oprah, George and Amal Clooney, Steven Spielberg, and Jeffrey Katzenberg, the March for Our Lives GoFundMe page has raised an additional $2.7 million as of Tuesday.

And this is just the tip of the iceberg, folks.

The activist left has been bankrolling these children since the day after the shooting, when Debbie Wasserman Schultz (D-FL) arrived on the scene in Parkland and realized there were easy political points to win.

Since she joined their ranks (in the background, out of the view of the cameras, of course), the group of activist kids have raised millions of dollars for the anti-gun left.

However, the worst part of this entire debacle has been the absolute silence with which the media has met the left’s obvious astroturfing success.

Instead of questioning the motives, the resources, and the planning behind the Douglas High School students’ movement, the media simply pretended that these kids were just really smart and really organized. The media willfully ignored the signs of leftwing interference, they refused to ask real questions about the movement, and they were happy to allow the Democrat anti-gun left to use these children to push their own agenda.

I don’t blame the kids. I am disgusted by the Democrats, but not surprised. They have always told us that they don’t let a “good crisis go to waste.” It’s the media who should be most ashamed of their role in spreading Democrat talking points, while also allowing the left to use children to demagogue Republicans and law-abiding gun owners.

The mass shooting at Marjory Stoneman Douglas High School was a horrible tragedy, but the news coverage of the aftermath has been a disgusting travesty and an education in bad journalism.