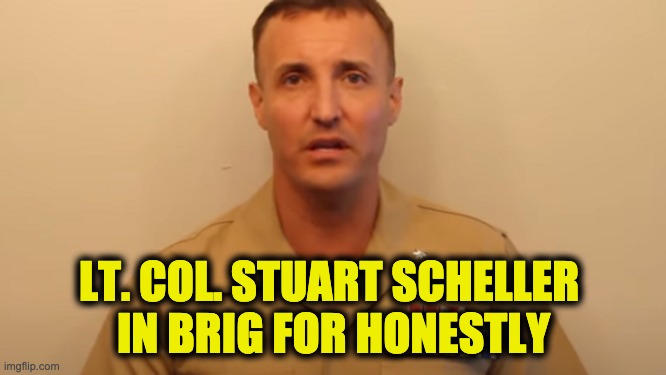 Those demanding accountability for the Afghanistan disaster are getting some, but it’s not the accountability people wanted or the country deserved. Joe Biden’s Pentagon has jailed the Marine Lt. Col. who was honest with America and warned about the disastrous withdrawal from Afghanistan in August.

U.S. Marine Lt. Col. Stuart Scheller was relieved of his duties after publicly scorning Biden for the horrible plans to pull out of Afghanistan. He then tendered his resignation for the Corps. But his resignation was declined. Biden’s political Pentagon has thrown the Marine in jail ahead of a court-martial trial.

Under the failed  Biden administration, nothing will get you in trouble faster than demanding accountability. In August, Scheller posted a video slamming the pullout and demanding accountability from the upper echelon of our military leaders. Scheller proved prescient because the same day he posted his video, an ISIS terrorist touched off a suicide bomb killing 13 U.S. service members and 175 Afghan citizens.

Scheller’s father wrote on Facebook that the Pentagon had told his son to shut up and ignore his First Amendment rights to free speech, but he spoke out, anyway.

Recently, Stu asked to resign; The USMC told us, his parents, that our son serves at the pleasure of the President. They have not accepted his resignation

We know that the real pleasure of the President is smelling the hair of little girls.

He understood from his first posting that he was risking his retirement, his medical benefits, and the stability of his family by speaking out. HE HAS INDEED LOST ALL OF THESE AND NOW HIS FREEDOM. Yet, he was willing to risk that all for the country he loves and to protect the men and women who have served and continued to serve by answering that much-needed question: WAS IT ALL WORTH IT? ACCOUNTABILITY and HONESTY are essential to answering this question!

“All our son did is ask the questions that everybody was asking themselves, but they were too scared to speak out loud,” Stu Scheller, Sr., said. “He was asking for accountability. In fact, I think he even asked for an apology that we made mistakes, but they couldn’t do that, which is mind-blowing.

And for that, he was tossed in the brig.

“The time, date, and location of the proceedings have not been determined. Lt. Col. Scheller will be afforded all due process,” the statement continued.

“When somebody tried to speak out and say: look, we could have done a lot better. We owed these marines, and sailors, and army personnel better than that. They not only told them to shut up, but when he didn’t shut up they put him in jail.”

People see this for what it is. They see this from the top brass trying to shirk responsibility and when somebody in the chain of command speaks up, they’re silenced – we can do better than that.

He is a man who is a 17-year Marine – A Marine Officer – An Infantry officer, just like I was – A guy who’s conscious required him to speak out and the American military, specifically the US Marine Corps, has put him in Jail for that.

This will not stand.”

Parts of this post were first seen at  Flag and Cross