Republicans Beware! You Ain’t Won Anything Yet

GOP Candidates You Need To Stop Counting Your Chickens... 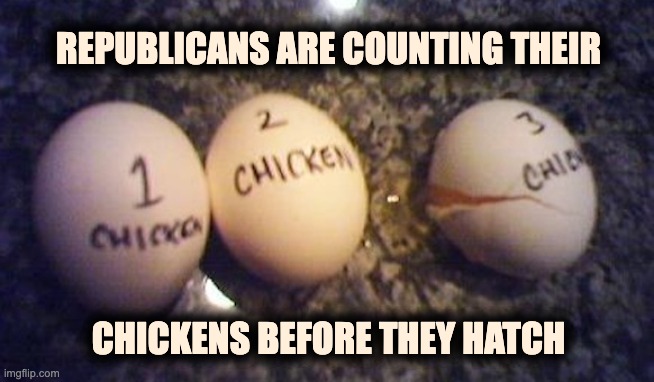 My mom of blessed memory used to warn me with a Yiddish phrase, “don’t give yourself a kinahora.” It has many meanings. Mom used the phrase as a Yiddish way to say, “don’t don’t count your chickens before they are hatched.” stop counting their chickens

As of today, the “generic” congressional ballot shows the GOP with a big lead over the Democrats. It looks as if voters will change the party running Congress in November 2022 and the Presidency in 2024 but will the present lead hold. Some pundits predict that they might gain anywhere between 35-60 hours seats. They say the GOP Senate gains will be small but give the party a majority.

The critical part of the above is “as of today.” In 2016 and 2020, Republicans didn’t believe the polls because they are usually wrong and have favored the Democrats. So now that the polls predict a good year for Republicans, are we supposed to believe them now? Many Congressional Republicans believe them and are counting their chickens before they are hatched.

Things can change quickly. In 2012 Todd Akin (R-MO) led during much of the pre-election season by double digits. Then he said that women who were subject to legitimate rape rarely got pregnant, his support plummeted, and he lost the election. The same year Richard Mourdock who was considered a lock in the Indiana Senate race, said that a pregnancy resulting from rape is something “God intended.” He lost female support and the Senate race.

Besides avoiding stupid statements like Aiken and Mourdock, what can the Republicans do to maintain their lead? Talk policy. What will you do to fix inflation, supply chain crisis, empty supermarket shelves, etc.? Figuring out what issues need to be addressed is not difficult. What Americans want to hear from candidates is what are their solutions.

Some are still talking about the 2020 election and/or saying if there is a GOP majority, they will move to impeach Biden. I am old enough to remember when presidents were rarely impeached. Impeachment became a regular political action beginning in 1998 when Bill Clinton committed perjury for lying about an affair. In 2019 Donald Trump was impeached for a legitimate phone call with the president of Ukraine. In 2020 (after he left office), he was impeached a second time due to  the January 6th riot in the capitol building, which the House called “incitement of insurrection.” The real reason for each of Trump’s impeachment was was that the Democratic majority in the House hated Trump and his policies.

On Thursday, Jan. 20,  Rep. Jim Jordan (R-OH) laid out the investigations the GOP would conduct if they retake the House. His top three was to investigate the treatment of parents, the border crisis, and the origins of the COVID virus. Other members of Congress are saying there will be inquiries about the Afghan withdrawal and Dr. Fauci. These possible investigations are important and perhaps should be investigated by Congress. But they are not campaign issues. Relying on investigations as campaign promises are giving themselves a kinahora—they are acting as if they already won.

Voters care about “kitchen-table” issues. They see inflation lowering their buying power. The price of energy really hurts. Thanks to the supply chain crisis, many supermarkets have empty shelves making it more difficult to feed their families. Forced vaccinations, mask-wearing, and schooling from home are damaging their children’s development, health, and future. As we get into the heart of the winter months, people will see the price of heating their houses jump. The GOP must remember that the first priority or voters with children are their kids.

Republicans, however, seem to be concentrating on acting as if they already won and how they will punish the Democrats. The mid-term election is in ten months, and it looks as though they will have great results. But things can change quickly, change back, and change a third time. To maintain the lead they seem to have, Republicans need to concentrate on kitchen-table issues. They must convince voters that Republicans will make the lives of their families better. After all, they ain’t won anything yet.