We Knew Bannon’s A Bully Who Spreads Nasty Rumors, But Disloyal Too? 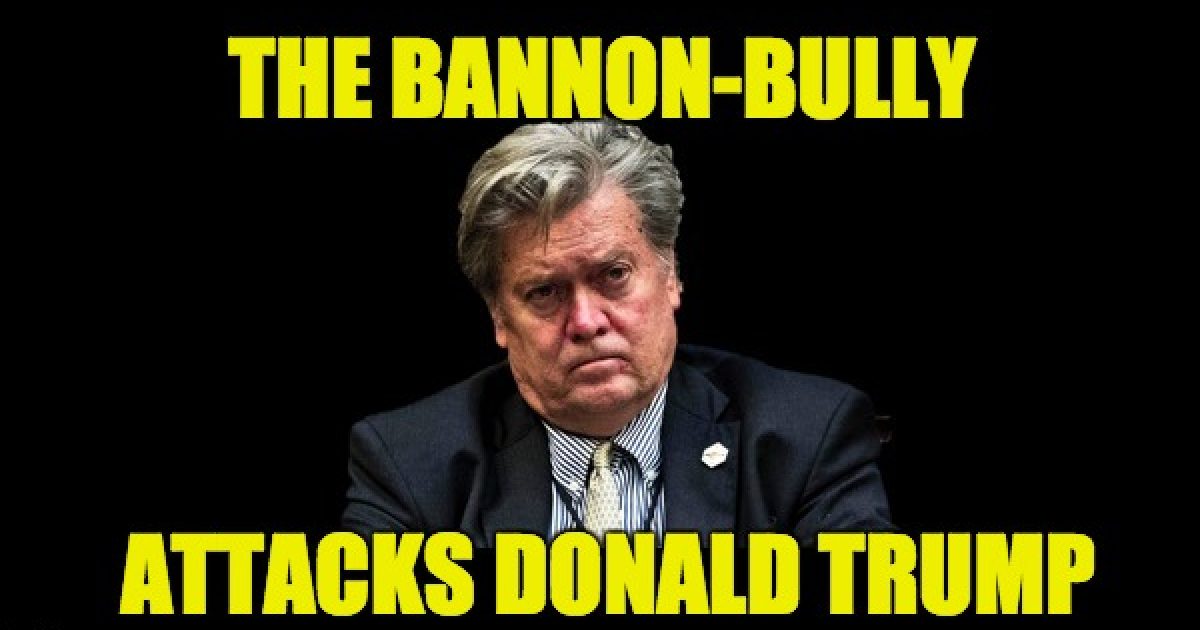 Having discontinued contributing to Breitbart soon after Andrew passed away, I never had a chance to know Steve Bannon personally.  Sure I defended Bannon against charges of Antisemitism, but that was because the charges were fake.

What I didn’t know until much later in the 2016 campaign was that Mr. Bannon could be ruthless towards people with whom disagrees. That ruthlessness continued when he entered the White House and now that he’s left the administration, Bannon’s rage is directed toward the man he helped to elect.

Bannon doesn’t have the best reputation, after all, he is a bully who spreads false rumors about people, but nobody thought he would display such disloyalty to the guy who brought him into the campaign, the White House and made him a household name.

The Guardian newspaper revealed explosive parts of a new book called “Fire and Fury” by Michael Wolff. The book is described as lifting “the lid on a White House lurching from crisis to crisis amid internecine warfare, with even some of Trump’s closest allies expressing contempt for him.”

In his interview for the book, Bannon goes after the President and the most important things in Trump’s life,  his beloved family. Specifically Don Jr. and Jared Kushner. But make no mistake he may have been talking about Trump’s family but his attacks were meant to hit the POTUS below the belt

He is particularly scathing about a June 2016 meeting involving Trump’s son Donald Jr, son-in-law Jared Kushner, then campaign chairman Paul Manafort and Russian lawyer Natalia Veselnitskaya at Trump Tower in New York. A trusted intermediary had promised documents that would “incriminate” rival Hillary Clinton but instead of alerting the FBI to a potential assault on American democracy by a foreign power, Trump Jr replied in an email: “I love it.”

The meeting was revealed by the New York Times in July last year, prompting Trump Jr to say no consequential material was produced. Soon after, Wolff writes, Bannon remarked mockingly: “The three senior guys in the campaign thought it was a good idea to meet with a foreign government inside Trump Tower in the conference room on the 25th floor – with no lawyers. They didn’t have any lawyers.

“Even if you thought that this was not treasonous, or unpatriotic, or bad shit, and I happen to think it’s all of that, you should have called the FBI immediately.”

Bannon went on, Wolff writes, to say that if any such meeting had to take place, it should have been set up “in a Holiday Inn in Manchester, New Hampshire, with your lawyers who meet with these people”. Any information, he said, could then be “dump[ed] … down to Breitbart or something like that, or maybe some other more legitimate publication”.

MSNBC also got ahold of the Wolf book and tweeted that Bannon contends Trump knew about that June meeting:

BREAKING: In new book Steve Bannon is quoted talking about the 2016 Trump Tower meeting, “The chance that Don. Jr did not walk these Jumos up to his father’s office on the 26th floor is zero.”

Tune in to @MSNBC for more. pic.twitter.com/hhzEOu26L4

Trump’s son-in-law, Jared Kushner will be indicted for money laundering according to Steve Bannon

“You realise where this is going,” he is quoted as saying. “This is all about money laundering. Mueller chose [senior prosecutor Andrew] Weissmann first and he is a money-laundering guy. Their path to fucking Trump goes right through Paul Manafort, Don Jr and Jared Kushner … It’s as plain as a hair on your face.”

Last month it was reported that federal prosecutors had subpoenaed records from Deutsche Bank, the German financial institution that has lent hundreds of millions of dollars to the Kushner property empire. Bannon continues: “It goes through Deutsche Bank and all the Kushner shit. The Kushner shit is greasy. They’re going to go right through that. They’re going to roll those two guys up and say play me or trade me.”

Now before you believe any of the Bannon charges understand how the man works. As the president’s chief of strategy, Steve Bannon was a master at planting nasty stories about his political opponents.

Remember the story about Michelle Fields, she claimed that Corey Lewandowski who was then the Trump campaign manager grabbed her so hard he left a black and blue mark on her arm. The same night as the incident Breitbart’s Washington political editor, Matthew Boyle, reported that he spoke to Lewandowski who acknowledged that he did manhandle Fields. Soon after Lewandowsky changes his story and although he had the goods on the campaign manager, Matt Boyle withdrew his story. I have been told by inside sources familiar with the incident that not only did Steve Bannon force Boyle to disavow his own work, but he generated the personal attacks on Ms. Feilds that appeared on social media and in some elements of the press.

Right after president Trump took office rumors began to seep out that the President was unhappy about Reince Priebus’ performance as Cheif of Staff, those rumors came from Bannon. Similar early rumors about Rex Tillerson were said to come from the Bannon hit squad.

Bannon was not a fan of General McMaster as the President’s National Security Advisor, perhaps because the General didn’t think Bannon was qualified to be on the National Security Council. Amid that battle, rumors began to circulate that General McMaster was anti-Israel. That charge also rumored to be from Bannon was proven to be absurd.  When Bannon was at the White House there were rumors of power struggles between him and Kushner, so it’s not a surprise he would attack him now.

Everyone who covers politics have people who disagree with them or even hurt their ego. The best way to handle it is by doing the research to prove that opponent wrong.

But not Steve Bannon. He is simply a bully. His approach is pushing unsubstantiated rumor and innuendo designed to destroy the person with whom he disagrees.  That was one of the reasons he was booted from the Administration and one of the reasons Breitbart.com isn’t as respected as it was before Steve Bannon took over. People may fear a bully, but no one respects a bully.

UPDATE, The Presidents Response (Bannon has lost his mind)

Statement from the President of the United States

Steve Bannon has nothing to do with me or my Presidency. When he was fired, he not only lost his job, he lost his mind. Steve was a staffer who worked for me after I had already won the nomination by defeating seventeen candidates, often described as the most talented field ever assembled in the Republican party.

Now that he is on his own, Steve is learning that winning isn’t as easy as I make it look. Steve had very little to do with our historic victory, which was delivered by the forgotten men and women of this country. Yet Steve had everything to do with the loss of a Senate seat in Alabama held for more than thirty years by Republicans. Steve doesn’t represent my base—he’s only in it for himself.

Steve pretends to be at war with the media, which he calls the opposition party, yet he spent his time at the White House leaking false information to the media to make himself seem far more important than he was. It is the only thing he does well. Steve was rarely in a one-on-one meeting with me and only pretends to have had influence to fool a few people with no access and no clue, whom he helped write phony books.

We have many great Republican members of Congress and candidates who are very supportive of the Make America Great Again agenda. Like me, they love the United States of America and are helping to finally take our country back and build it up, rather than simply seeking to burn it all down.