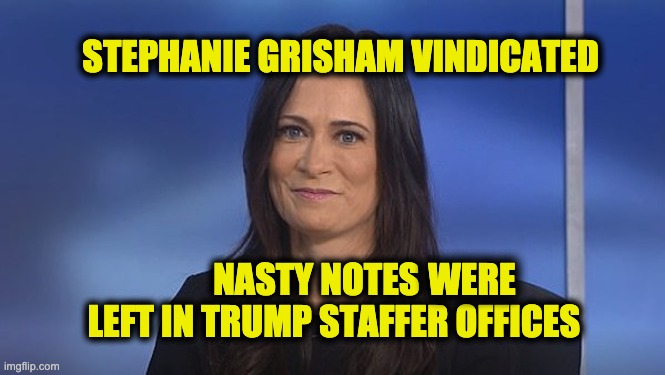 In November 2019, then-White House press secretary Stephanie Grisham told CNN that President Barack Obama’s White House staffers left discouraging notes for their successors in the Trump administration—she was pummeled and accused of lying. On Wednesday, comedian Dave Chappelle told Naomi Campbell on the “No Filter” YouTube series that while visiting the White House during Obama’s last days, “I saw this happening. I’m not going to say who did it, but it was celebrities [was] writing all this crazy shit”   Grisham was right about the notes, but they weren’t from Obama’s staff. It was his celebrity buddies.  One does not wander around the White House (WH) alone. There had to be people in Obama’s staff knowing about it.

WH Press Sec Stephanie Grisham claims Obama aides left 'you will fail" notes in offices for Trump aides: “We came into the WH, I’ll tell you something. Every office was filled with Obama books and we had notes left behind that said ‘you will fail,’ ‘you aren’t going to make it,’”

That’s when the attacks began. Obama aides denied they left the nasty notes as they should have, but instead of wondering if the notes were sent at all, the liberal media assumed Grisham was lying. After all, she worked for Trump and Orange Man Bad. Therefore the Media stories assumed she was lying:

USA Today led with the claim of Susan Rice, a woman known for telling lies to the media.

Folks, there are literally hundreds of other examples.  NOT One report bothered to investigate whether or not notes were left.

It took seventeen months later to learn that Stephanie Grisham was telling the truth about the notes. But it wasn’t an investigative reporter revealing what happened…it was comedian Dave Chappelle:

“Remember when the Trump administration moved in, they said the Obama staff left dirty notes for us in all the drawers and all the cabinets?  I saw this happening. I’m not going to say who did it, but it was celebrities writing all this crazy s**t and putting them all over there. I saw them doing it, so when I saw it on the news, I laughed real hard.”

Watch it on video:

Some may claim that Grisham was wrong to assume that only Obama staffers would have the freedom to wander into White House offices to leave notes…but to be totally honest, It’s difficult to imagine people wandering around WH offices without people knowing. A few years ago, I had the pleasure of visiting a friend who worked in the East Wing.   Once I got inside the WH n the building was escorted everywhere as it should be.

Despite the fact that it happened during Obama’s last days, I can’t see how celebs or anyone else was allowed to roam the WH unescorted.