Steele Dossier Was British Disinformation: From A Steele Employee 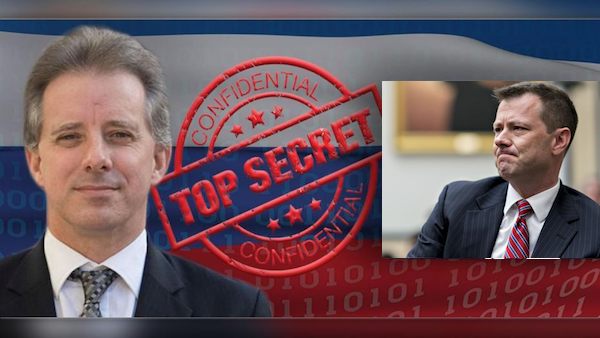 The intelligence in the dossier by former British spy Christopher Steele, paid for by the Democratic National Committee (DNC) and the Hillary Clinton campaign, was not from a well-placed source in the Russian government, but a paid-for employee of Steele’s firm, Orbis, who disputed the findings of the dossier when they were published on January 10, 2017, by Buzzfeed. This, from the bombshell now declassified January 24, 2017 interview by the FBI with the sub-source that was only undertaken two weeks after the false allegations against President Donald Trump and his campaign — that they were Russian agents who had helped Moscow hack the DNC and put its emails onto Wikileaks — became public.

Those allegations were debunked by none other than former Special Counsel Robert Mueller, but he never included the sub-source interview in his March 2019 report. That would not come until later from Justice Department Inspector General Michael Horowitz in Dec. 2019 when he summarized the interview, which has now been declassified by the Senate Judiciary Committee.

According to a Senate Judiciary Committee press release summarizing the interview, “The document reveals that the primary ‘source’ of Steele’s election reporting was not some well-connected current or former Russian official, but a non-Russian based contract employee of Christopher Steele’s firm. Moreover, it demonstrates that the information that Steele’s primary source provided him was second and third-hand information and rumor at best.”

According to the interview, Steele’s sub-source said when he was asked in March 2016 to look into then-Trump campaign manager Paul Manafort, that he and his contacts came up with nothing. Per the FBI, the source “carefully asked around some of his… friends. He said he may have asked friends and contacts in Russia, but he couldn’t remember off-hand. He added that, for this topic, his friends and contacts in Russia couldn’t say very much because they were ‘too far removed’ from the matter.”

The source said when he asked to get information from Russia on Trump, “He was nervous and cautious when asking around about the topic in Russia, but he felt like he had to report something back to Steele about it.”

As for President Trump’s supposed encounter with prostitutes in a Moscow Ritz-Carlton, the source, per the FBI interview, “said that he reported Trump’s unorthodox sexual activity at the Ritz as ‘rumor and speculation’ and that he had not been able to confirm the story.”

On validating the material for the dossier, the source, per the FBI interview, said, “Steele pushed [him] to try and either follow-up with people or corroborate the reporting, but [he] wasn’t able to do so. Moreover, [he] added attempts at getting corroboration on these subjects made him uncomfortable — he was nervous about the Russians finding out about it.”

Meaning, the source was not talking to the Russian intelligence sources directly — despite the Steele dossier falsely saying he had — but was evading them in pursuit of his own interviews.

Steele had reported, based on these sources, that “there was a well-developed conspiracy of co-operation,” between then-candidate Donald Trump and Russia. That starting in July 2016, “This was managed on the Trump side by the Republican candidate’s campaign manager, Paul Manafort, who was using foreign policy advisor, Carter Page, and others as intermediaries. The two sides had a mutual interest in defeating Democratic presidential candidate Hillary Clinton, whom President Putin apparently both hated and feared (like many Americans). Among other things, Source E acknowledged that the Russian regime had been behind the recent leak of embarrassing email messages, emanating from the Democratic National Committee (DNC) to the WikiLeaks platform. The reason for using WikiLeaks was ‘plausible deniability,’ and the operation had been conducted with the full knowledge and support of Trump and senior members of his campaign team.”

But on that core allegation, the source told the FBI, per the Jan. 2017 interview, “the individual said that the Kremlin might be of help to get Trump elected but [he] did not recall any discussion or mention of Wikileaks.”

According to Justice Department inspector general Michael Horowitz’s report, released in Dec. 2019, summarizing the interview, “the Primary Sub-source made statements during his/her January 2017 FBI interview that were inconsistent with multiple sections of the Steele reports, including some that were relied upon in the FISA applications. Among other things, regarding the allegations attributed to Person 1, the Primary Sub-source’s account of these communications, if true, was not consistent with and, in fact, contradicted the allegations of a ‘well-developed conspiracy’…”

And yet, per Horowitz, the FBI’s “receipt of Steele’s election reporting on September 19, 2016, played a central and essential role in the FBI’s and Department’s decision to seek the FISA order.”

The FISA warrant requests against former Trump campaign advisor Carter Page and the campaign at large began in Oct. 2016 and went all the way through June 2017.

Most telling of the disclosures was a separate New York Times article that former FBI Peter Strzok commented on in Feb. 2017, in which Strzok disputed the accuracy of the Times’ reporting. The article was entitled, “Trump Campaign Aides Had Repeated Contacts With Russian Intelligence.”

Strzok challenged the central premise, stating in the document, “[w]e have not seen evidence of any individuals affiliated with the Trump team in contact with IOs [Intelligence Officials]… We are unaware of ANY Trump advisors engaging in conversations with Russian intelligence officials…” and “[r]ecent interviews and investigation, however, reveal Steele may not be in a position to judge the reliability of his sub-source network.”

Meaning, after the sub-source interview in Jan. 2017, Strzok had already debunked the Steele dossier. Therefore, the FBI’s and the Justice Department’s continuing assertion to the FISA court through June, “the FBI believes that Russia’s efforts to influence U.S. policy were likely being coordinated between the RIS [Russian Intelligence Services] and Page, and possibly others” was most certainly false.

An outstanding question now is whether any crimes were committed by the FBI and the Justice Department when the inaccurate warrant applications were submitted to the FISA court. These are discredited and disgraced institutions that blindly pursued false allegations of treason into the opposition party in an election year and wrecked the peaceful transfer of power by secretly carrying the investigation over into the Trump administration in an attempt to decapitate the new President politically and legally. It was a failed coup.

Now, we are only beginning to learn the extent of the damage to the Constitution and the republic. Both of which may be beyond saving. If former Vice President Joe Biden — who knew all about the investigations and has a perverse incentive never to get to the bottom of it — wins the election in November, all bets might be off.