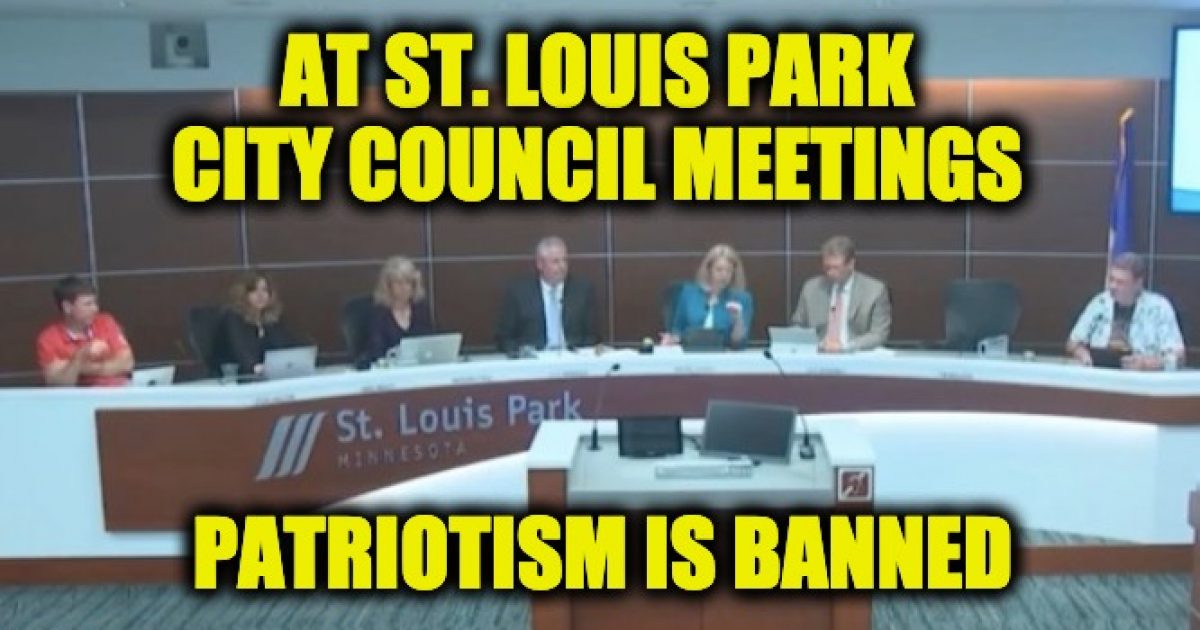 “I pledge allegiance to the flag of the United States of America, and to the republic for which it stands, one nation under God, indivisible, with liberty and justice for all.”  St, Louis Park Pledge

The St. Louis Park, Minnesota City Council voted unanimously on June 17 to amend their procedure rules to eliminate the reciting of the  Pledge of Allegiance before the start each of their meetings to enable the council to serve a more “diverse community.”  When the public found out, there was a tidal wave of opposition, and the council is reconsidering.

Council member Anne Mavity sponsored the rules change because she didn’t want to hurt the feelings of non-citizens.

“Not everyone who does business with the city or has a conversation is a citizen,” she said. “They certainly don’t need to come into city council chambers and pledge their allegiance to our country in order to tell us what their input is about a sidewalk in front of their home.”

She also said that about half the cities in Minnesota do not require the Pledge of Allegiance to be spoken at council meetings. The Star Tribune fact-checked her and found only two other MN cities had removed the pledge.

When the Republicans in the State Senate tweeted out the news, the reactions were not positive:

SHOCKING: Democrats on the St. Louis Park, MN City Council voted unanimously to eliminate the pledge of allegiance at their meetings. ? pic.twitter.com/quurAmBm3I

Not surprisingly the same state gave us @IlhanMN

Don, it’s not just the same state that gave is Rep. Omar, St. Louis Park is in her Congressional district, they elected her to Congress,

Because a pledge of loyalty is such a free act. Do this thing or you’re not really one of us: FREEEEEDDOOOOMMMM!!!! Wow.

Exactly! Just because the meeting starts with the Pledge, it doesn’t mean everyone there has to recite it.

Why do we need a welcoming community over the Pledge of Allegiance People are too offended by everyone and everything If there is such a problem these people do not deserve to live in the USA. What a bunch of traitors

So we have to change our ways as Americans to protect the feelings of others? It used to be that people wanted to come to the United States because they wanted to be a part of the great society we had built. Now it seems they come to change it to the mess they fled.

Wade, this is not new, progressives have been trying to change the U.S. into a socialist state for decades.

The next one earns a BINGO!

Time to get a new city council!

What else are you going to cut out? Not a good move St. Louis park, Sad ?

They wont be voted out they give people to much free stuff that's why they fight legal immigration, it's the only way they can have power,

Such Anti-American actions are divisive and embarrassing to every American citizen. This vote disgusts me. Diversity is fine, except the ONE uniting factor is we are all Americans. But you are letting people disrespect our country with PC BS.

There were many more. The reaction was so adverse (and not just on Twitter) that St. Louis Park Mayor Jake Spano is trying to reverse the measure.

1/3 As many have heard the SLP city council recently voted 5-0 to stop saying the pledge of allegiance to start council meetings. I was out of the state with family at the time (as was CM Miller) so while I was not a fan of the proposal, I didn’t get a chance to vote on this.

2/3 Historically when a decision is made by the council, it’s over and we move on but after hearing from more people than I can count in the last day (many admittedly not from SLP), I asked my colleagues to revisit this decision and a majority of them agreed.

3/3 As such, we will be discussing this issue at our next city council meeting on July 8th at 6:30 in the council chambers at City Hall. I haven’t been able to reply to every contact I’ve had but please feel free to dm me or email. I read them all

He wants to be DMed? Boy, I would hate to see his twitter feed.