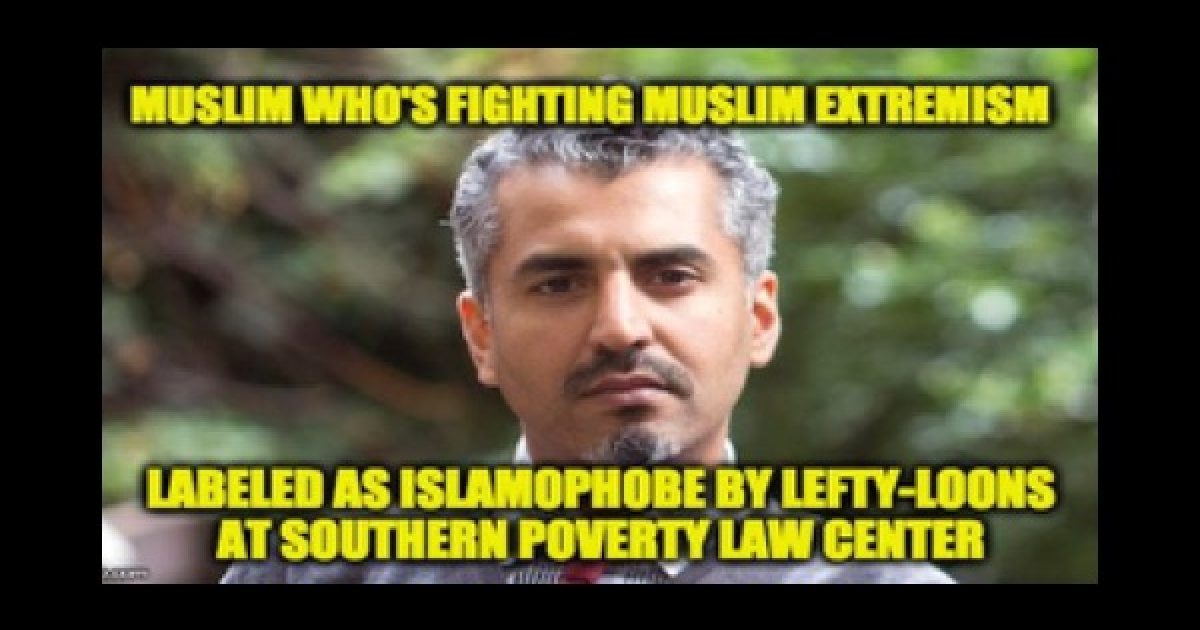 It is no secret that the Southern Poverty Law Center (SPLC) is an over-the-line, liberal, loony-toons group dedicated to fighting anybody or anything that identifies as conservative—but this case was extreme even for them.Maajid Nawaz is a former Muslim extremist who now spends his time fighting against the spread of radical Islam in the West. For his efforts, he was threatened with death by Islamists, and been slandered as an “Islamophobe” and a hate group by the SPLC. Maajid Sued last June, and today the SPLC settled with $3,375 and a public apology.

Posted on the SPLC website was a statement announcing their well-deserved defeat, which said in part:

Today, we entered into a settlement with and offered our sincerest apology to Mr. Maajid Nawaz and his organization, the Quilliam Foundation, for including them in our publication A Journalist’s Manual: Field Guide to Anti-Muslim Extremists. Given our understanding of the views of Mr. Nawaz and Quilliam, it was our opinion at the time that the Field Guide was published that their inclusion was warranted. But after getting a deeper understanding of their views and after hearing from others for whom we have great respect, we realize that we were simply wrong to have included Mr. Nawaz and Quilliam in the Field Guide in the first place.

Among those who contacted us were human rights advocates affiliated with the United Nations who emphasized that Mr. Nawaz’s work combatting extremism “is actually analogous to that of the SPLC over the years in the South.” Indeed, one of the reasons Mr. Nawaz has said that he was so troubled by our listing was the fact that he had respected our work for many years. Although we may have our differences with some of the positions that Mr. Nawaz and Quilliam have taken, we recognize that they have made important contributions to efforts to promote pluralism and that they are most certainly not anti-Muslim extremists.

And the SPLC’s head conservative hater posted this video apology:

The really sick part was that SPLC didn’t call Nawaz an Islamophobe because he spewed anti-Muslim rhetoric, or prints anti-Muslim illustrations. No, they labeled him because:

“… major elements of his story have been disputed by former friends, members of his family, fellow jihadists and journalists, and the evidence suggests that Nawaz is far more interested in self-promotion and money than in any particular ideological dispute.”

Even if the above is true, that he is more interested in self-promotion and money, that doesn’t make him an Islamophobe, it makes him a capitalist.

One can’t really expect anything different from the Southern Poverty Law Center. The SPLC hasn’t been well-intentioned in a long time. It started as a civil rights organization with good intentions, fighting racists such as the KKK. However, in recent years it has gone crazy.  The SPLC unjustly leveled accusations of racism. They branded as “bigoted” many groups and individuals whose only crime lies in their refusal to embrace the SPLC’s left-wing agenda,   including Tea Partiers, The Federation for American Immigration Reform (known as FAIR)  Christian organizations that don’t believe in same-sex marriage or abortions. And of course, they spent most of the recent presidential election cycle attacking the future president Trump as racist. Heck, they even declared the term “Drain The Swamp” as racist which is ridiculous charge unless of course comic character “Swamp Thing” really exists.

My Mother, of blessed memory, taught me the only way to stop a bully from bullying is to stand up to them, look them in the eye, and push back…first verbally, and then if necessary physically. With his lawsuit, Maajid Nawaz stood up to the conservative-hating bully called the Southern Poverty Law Center. Let’s hope others push back against the bully SPLC.