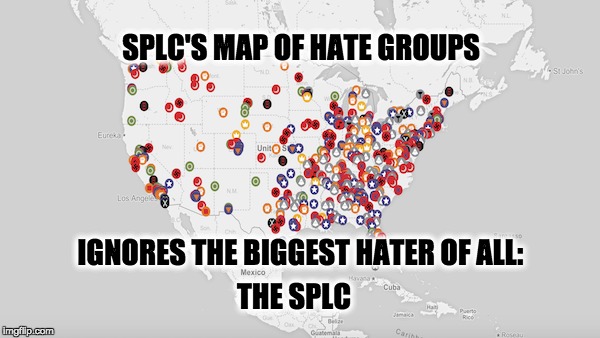 it is no secret that the Southern Poverty Law Center (SPLC) is an over-the-line, liberal. loony-toons group dedicated to fight anybody or anything that identifies as conservative. Recently they attacked Maajid Nawaz, a former Muslim extremist who now spends his time fighting against the spread of radical Islam in the West. For his efforts he has been threatened with death by Islamists, and slandered as an “Islamophobe” and a hate group by the SPLC . How a Muslim man can be considered to be Islamophobic is beyond me, but such is the logic of the left. The post below provides additional evidence that this supposedly non-partisan group targets anyone with a conservative opinion,

Perhaps, the most overused word in America is “hate.” All you have to do is accuse someone who disagrees with you of hate, and that’s it: guilty as charged. Former Democratic presidential candidate Howard Dean even famously said recently that “hate speech” is not protected by the First Amendment.

This is like the modern equivalent of the horrible anti-witch hysteria in Salem in 1692-1693. If you were accused of being a witch, then you were virtually guilty. Twenty were accused and executed for supposedly being a witch. Thankfully, when Rev. Increase Mather returned to Massachusetts from England, he put a stop to the evil witch-hunt by ordering that the Biblical standard be applied. No one could be convicted except by two or three witnesses—no more convictions by the testimony of only one witness. The killings stopped, and the jails were emptied of those falsely accused.

Today, the charge of “hater” is bandied recklessly. Because Christians may disagree with someone on some issue, the Christian is branded a hater, with no evidence or witnesses needed.

The Southern Poverty Law Center (SPLC) of Montgomery, Alabama has a lot to do with the overuse of the word “hate” in our time. Initially, during the ending days of the civil rights movement, the SPLC did some worthy work, working against the hate of racism.

But recently the SPLC has begun to denounce pro-family groups that stand for traditional marriage—God’s rules for marriage—as haters. Furthermore, the SPLC has denounced those prophets among us, who are sounding the alarm on radical Islam, as “haters.”

The SPLC has put together a “Hate Map,” which lumps groups like the KKK and neo-Nazis with D. James Kennedy Ministries, where I work.

Real haters bomb and shoot people. But according the SPLC, we’re haters. So are Frank Gaffney of the Center for Security Policy and Robert Spencer of jihadwatch.org (watchdogs on radical Islam), Tim Wildmon of the American Family Association, David Barton of WallBuilders, Gary DeMar of American Vision, Liberty Counsel (led by Mat Staver), Pacific Justice Institute (led by Brad Dacus), and Tony Perkins of the Family Research Council.

It’s almost as if the SPLC has the philosophy: We disagree with them, so we’ll call them haters. At one time, they even profiled Dr. Ben Carson as a supposed hate-monger because of his Biblical beliefs on marriage and family.

The SPLC says on their website: “The Southern Poverty Law Center is a nonprofit civil rights organization dedicated to fighting hate and bigotry, and to seeking justice for the most vulnerable members of society.” Sounds great, until you actually look at their map of “hate.

On the map, D. James Kennedy Ministries is right there with “United Klans of America,” an offshoot of the KKK. The SPLC brands us as “Anti-Gay.” We don’t agree with same-sex marriage, but we don’t hate anyone, including homosexuals.

The Family Research Council in Washington, DC is also on SPLC’s map of hate. That fact led to bloodshed, when a crazed young homosexual marched in with the intention of shooting as many people as possible in August 2012. The convicted attacker later told police he chose his target from the SPLC’s hate map.

He ended up shooting (not fatally, thankfully) a heroic man named Leo Johnson, who tried to stop him. That man is an African-American employee of Family Research Council. I mention his race because of the fact that the supposed civil rights champions of the SPLC have blood on their hands, African-American blood no less. And to my knowledge they have never apologized for this incident.

Dr. Frank Wright, host of the program, sums up the problem: “The Southern Poverty Law Center, which began well, has resorted to falsely labeling organizations that promote a Biblical view of marriage and sexuality as ‘hate groups.’ At the same time, they outwardly support sexual behavior that is opposed to God’s design. They literally call good evil, and evil good. They’re free to do that, of course. But law enforcement groups, the media, and educational institutions must no longer take seriously their pronouncements as if they were an objective, unbiased observer. The Southern Poverty Law Center is fighting for the extreme Left in the culture war.”

By constantly lobbing around the charge of hate, the Southern Poverty Law Center can’t seem to see real hate when it rears its ugly head. The SPLC has become the proverbial boy who cried wolf, as they continue to bandy about what may well be the most overused word in America.

Despite such false accusations, as Christians, we can respond best by continuing to speak the truth in love.