Spicer’s “Hitler” Mentions Were Terrible, BUT The Liberal/Media Criticism is Hypocritical 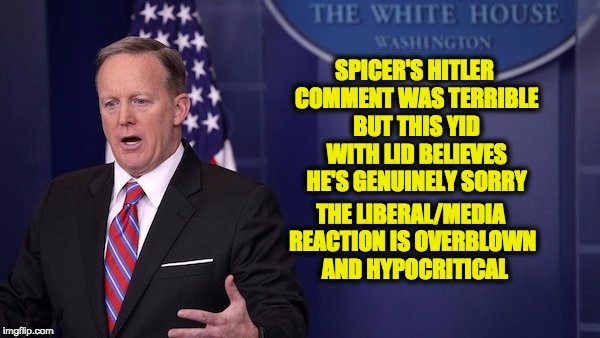 George Carlin was wrong, there aren’t seven words you can’t say on television there should be nine. The last two words should be “Hitler” and “Nazi.” Because unless it’s a movie or documentary on cable, those are generally uttered as part of an inappropriate analogy. These pages will usually blast people of either party who make an inappropriate analogy– liberals, media, and Democrats (I know that’s redundant) will only blast Republicans.   Sean Spicer the President’s press secretary fell into that trap yesterday. He made a world-class-level stupid comment about the Holocaust on Tuesday. Despite the fact he almost immediately realized his error felt remorse and publicly apologized, the liberal attack dogs piled on.

Spicer made inappropriate Holocaust statements twice during the same press briefing yesterday, neither one was made out of maliciousness. Both were atrocious. When he was talking about last week’s use of Sarin gas by Syrian president Assad, Spicer thought he was chiding the tyrant with, “We didn’t use chemical weapons in World War II. You know, you had a, you know, someone as despicable as Hitler who didn’t even sink to using chemical weapons,” Obviously, an ignorant comment as Zyklon b gas was the Nazis most common weapon to kill Jews during the Holocaust. And later in the daily presser Spicer forgot the rule about when you find yourself in a hole–stop digging.

When a reporter read his comment back to him and gave Spicer an opportunity to pull pack the comment, he made it worse, “I think when you come to sarin gas, there was no — he was not using the gas on his own people the same way that Assad is doing, I mean, there was clearly, I understand your point, thank you. Thank you, I appreciate that. There was not in the, he brought them into the Holocaust center, I understand that. What I am saying in the way that Assad used them, where he went into towns, dropped them down to innocent, into the middle of towns, it was brought — so the use of it. And I appreciate the clarification there. That was not the intent.”

Almost immediately Sean Spicer realized what he said, issued an apology, and went on more than one news network making televised apologies, “I was obviously trying to make a point about the heinous acts that Assad had made against his own people last week, using chemical weapons and gas. Frankly, I mistakenly made an inappropriate and insensitive reference to the Holocaust, for which there is no comparison. And for that I apologize. It was a mistake to do that.”

He made a mistake, but he didn’t obfuscate, instead owned up to it and apologized. However, the apology didn’t matter– throughout that day and the next one also, the pile-on continued despite the fact they’ve always ignored inappropriate holocaust references by Democratic Party politicians and their colleagues in the mainstream media.

Despite his many mea culpas Eric Wemple of the Washington Post blasted Sean Spicer in his column today;

“it’s not all just a verbal tic. The halting, hard-to-follow speech patterns reflect an unflattering truth about the top spokesperson at the White House: He doesn’t know what he’s talking about. A press secretary needs to have command of a vast topical landscape. Spicer has mastered bluster, and not much else.”

Yet in the month of September when his own paper ran two different opinion pieces inappropriately comparing then-candidate Trump to Hitler, Wemple was silent.  I suppose Wemple only believes that inappropriate Holocaust references are bad when it comes out of a Republican mouth.

Wemple and the other media liberals weren’t only silent when the Washington Post made stupid Holocaust references, they ignored Mexican President Enrique Peña Nieto, the Huffington Post, Comedian Louis C.K, and Rachel Maddow. They also ignored when Democratic Senator Sherrod Brown compared Republican governors John Kasich, Scott Walker and Chris Christie to the Nazis. Even the Holocaust Center in Washington was so very quick to blast Sean Spicer but they never complained when President Carter rejected a Presbyterian Christian  for a position on the board of the Holocaust Memorial because the guy’s name was too Jewish.

Where were Democrats like  Donald Payne Jr. (D-NJ) and David Cicilline (D-RI) both of whom who called for Spicer to be fired,  when Rep. Jim Clyburn (D-SC)  compared conservative bloggers (like me) to Hitler? The celebrities like Barbara Streisand or Debra Messing who think they know better than those of us who have to struggle for a living and called for Spicer to be fired–why  were they silent when Hillary Clinton said Republicans who wanted want the law enforced, and illegal immigrants deported, wanted to “round them up” and “put them in box cars?”

Why aren’t any of the members of the media bashing Nancy Pelosi for calling Sean Spicer to be fired, when she twice supported Barack Obama, the most anti-Semitic president since Franklyn Roosevelt refused to allow Jews fleeing Hitler into the country, not because he saw them as a threat, but because he believed America already had enough Jews.

And there is never an outcry that Al Sharpton, advisor to Obama, and MSNBC host, only has to burp to get front page coverage in the MSM despite the fact that he led two anti-Semitic pogroms in NYC, one in Crown Heights, the other in front of Freddy’s Fashion Mart in Harlem.

There are hundreds of other examples but the point is there was not one iota of criticism about the examples above. None of it excuses what Sean Spicer said yesterday, and my liberal friends will say the case of Spicer is much different– I agree. You see, not once in the cases above, did the person or media involved apologize.  But Sean Spicer immediately “manned up’ acknowledged his mistake and said he was sorry.

In Jewish tradition if someone makes a mistake and genuinely apologizes we are commanded by God to forgive as long as he continues to show he changed his ways. As a Jew, I believe that Spicer’s comments weren’t malicious and I forgive him (as long as he doesn’t do it again). American tradition is similar we forgive politicians who apologize—Bill Clinton was forgiven, Anthony Weiner was forgiven only after the first time he sexted, but when he showed he didn’t change his ways he was ostracized–but they were Democrats.

The liberal, media, and even the Jewish organizations’ piling on Sean Spicer has less to do with what he said than it has to do with which party he represents.  To the people criticizing Spicer I say, “luzzem! ” show a little “rachmones” because you are creating a “shanda” over one comment where the person showed remorse.  Note: If you don’t know what those words mean allow me to suggest you check them out in your favorite Yiddish (“mamaloshen“) to English dictionary,  instead of trying to score political points over a “fertummelt”comment about the Holocaust.