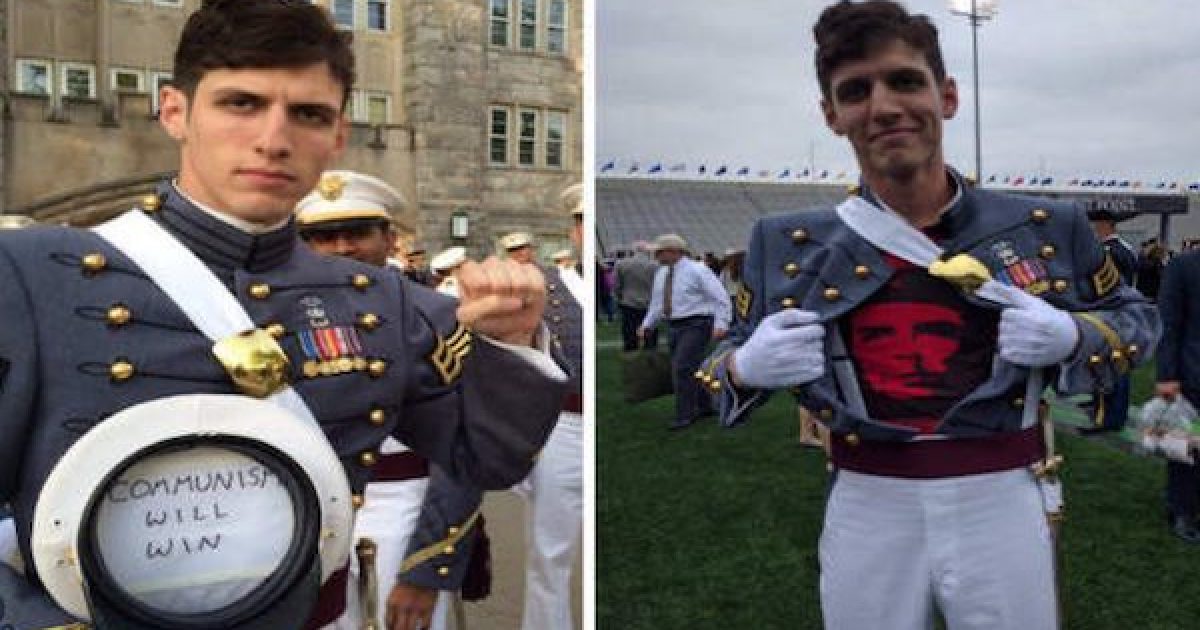 West Point graduate, Second Lieutenant in the U.S. Army Spenser Rapone, who outed himself a week ago as being pro-Colin Kaepernick, pro-Communist and a fan of Chelsea Manning, was reported as being insubordinate and expressing extreme anti-American views on social media. The sworn report was made in 2015 while Rapone still at West Point, but it did not delay his graduation.

According to a scathing report obtained by The Daily Caller (embedded below) despite Spenser Rapone’s insubordination and extremist political views,  the Academy’s administration saw fit to allow Rapone to graduate in 2016 and become an officer in the U.S. Army.

In a social media post that concerned retired Army Lt. Col. Robert Heffington, an Academy history professor at the time, Rapone wrote, “F*ck this country and its false freedom.”

In November 2015, after being removed from his Ranger battalion for violating standards, Rapone was a cadet in his final year at the academy. According to the report obtained by TheDC, after the latest in a series of incidents involving Rapone’s penchant for insubordination, Heffington became aware of Rapone’s radical leftist activity on social media and notified the cadet’s chain of command.

“From his various online rantings and posts, it appears that DCT Rapone is an avowed Marxist, which is completely out of line with the values of this nation and its Army,” Heffington said in a sworn statement. “Moreover, CDT Rapone’s posts indicate that he hates West Point, the U.S. Army, and indeed this country. One post dated 16 November 2015 states, ‘F*ck this country and its false freedom.’ He also … even implicitly justifies the actions of ISIS and blames the United States for terrorist attacks.”

Heffington concluded in his report, “I cannot reconcile the image of a first class cadet at West Point with the things he has posted online for the world to see. To me, these are red flags that cannot be ignored, and I fail to see how this individual can possibly graduate and become a commissioned officer in six months.”

That was the “nice part,” earlier in the report he explains the contempt Rapone has for his superior:

As an insubordinate Cadet who prefers communism to the American republic, how did Spenser Rapone graduate West Point and why is he an officer in the Army?

The second question is one Senator Marco Rubio asked on Wednesday. The Senator sent a letter to Ryan McCarthy, the acting Secretary of the Army. The letter said in part:

I respectfully request the United States Army immediately nullify Rapone’s commission and pursue all available disciplinary options under the Uniform Code of Military Justice. Rapone should be required to pay back in full the cost of his education and the United States Military Academy should consider revoking his degree.

(…) While I strongly believe academic institutions must respect the exchange of ideas and allow students to voice their opinions, members of the military who harbor anti-American views and express their desire to harm our country and its leaders are unfit to serve and defend our nation—and certainly should not enjoy the privilege of attending or graduating from an institution such as West Point, a taxpayer-funded military academy.

This is clearly not just a matter of law but also of common sense, and I can only assume Rapone’s unchecked behavior is an extreme embarrassment for the United States Army and the United States Military Academy. Please provide me with all relevant information regarding West Point’s efforts to ensure cadets who actively support the destruction of our government do not waste more taxpayer funds or prevent a more worthy candidate from attending an institution like the United States Military Academy. The Army’s premier officer commissioning source must ensure an individual like Spenser Rapone is never given the opportunity to lead or serve beside American soldiers.

Senator Rubio is correct, there is no room in the military for people like Spenser Rapone who hate this country..he needs to be dishonorably discharged ASAP.