Speaker Paul Ryan: Obama ‘Lives In His Own Sort Of Fantasy Land’ 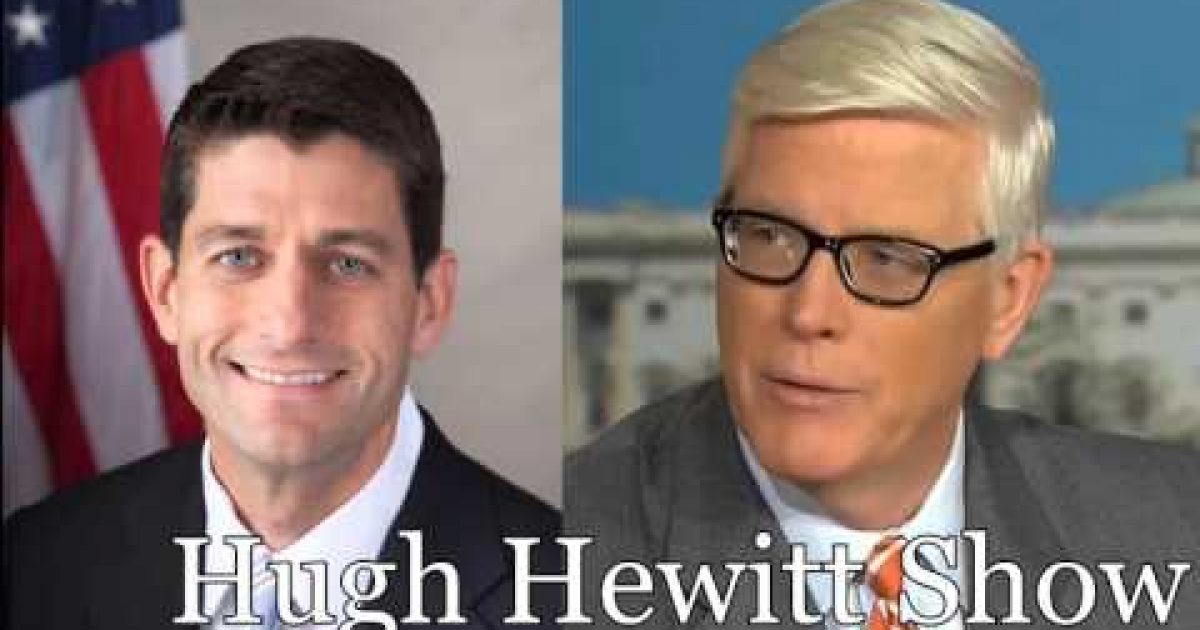 Hugh Hewitt took a break from his non-stop interviews/vetting of GOP candidates to interview Speaker of The House Paul Ryan on his radio show Monday evening.  Sandwiched between conversations about the NFL and MLB’s designated hitter rule (for a bright man like Hewitt it’s hard to believe he supports the DH) was a discussion about Ryan’s belief in the rule of law and separation of powers, and how Obama (incorrectly) views the world.

I think it’s the President trying to make it look like his program is where everybody is and mainstream. I think he lives in his own sort of fantasy land, and I think he sees the world as what he wishes it would be, thinks that that is what it is, when it actually isn’t, and then he talks and acts accordingly. Basically, what I think it is, is he’s trying to say that this is classic Alinsky, by the way.

Hewitt: That will make interviews number 144, 145, and 146 that I have done with GOP would-be nominees since the first debate. But I open the program with the Honorable Paul Ryan, Speaker of the House of Representatives. Happy New Year to you, Mr. Speaker, great to have you on.

Hewitt: Oh, it’s a big lineup. No, after 146 interviews with would-be presidential candidates, I’m glad you called. I’m talking to a legislator. That’s a change.

Ryan: Yeah, I’m definitely not a presidential candidate. I can make that very clear.

Hewitt: (laughing) Okay. Hey, I saw a picture of you with an orange tie, by the way. Did that Packers loss to the Cards bring you into the Dawg pound?

Ryan: No, thanks for bringing that up.

Hewitt: That was brutal. I was…

Ryan: I mean, I watched that game last night, and I’m like we lost to these guys?

Ryan: How, I don’t understand that. God, we played Carolina a whole lot better than Arizona did.

Hewitt: I felt back for you. Chuck Todd, I did Meet The Press the next day. He played hurt. He showed up for work the next morning. I was impressed with that.

Hewitt: Is the beard ever going to make it to the State of the Union, by the way, Mr. Speaker?

Ryan: Well, I’m a bow hunter, and deer season ends December 31st. I usually shave it right after that.

Hewitt: Oh, I think it would be a good look. The Smith Brothers Cough Drop thing, I like that. Okay, serious stuff. David Brooks, New York Times this morning, he says we are living in an age of anger growing out of a sense of powerlessness which is pervasive.

Hewitt: I disagree with him. I think people are mad, because they think there are two sets of rules. What’s Paul Ryan think?

Ryan: Well, I think if we return to the rule of law, which we have gravitated from, which is the Constitution, I think we can get our mojo back as a country. I think we can get our axis back. I think people can get a good sense of things. But they feel like we’re adrift, and there’s no plan to get us back on track. I think that’s what it is. And I think one of the things that I witness is there are people who believe, or are led to believe that we in Congress can do so much more, but we’re choosing not to do it. I mean, we could have stopped this or done that, but because, you know, we’re unprincipled or unfaithful to our beliefs, that we’ve chosen not to. The problem we have is the Constitution itself does have limits on, yes, Congress as well. And when you have an executive that’s just so brazen, so cavalier and so willing to break those limits, test those limits, push those limits, you know, it’s extremely frustrating. Compound that with the anxiety of the times, a weak economy, flat wage growth, foreign policy that’s a complete basket case and nightmare, and people want to pull their hair out. And so I understand all that. I think the solution to it is what we’re trying to do, which is speak truth to power, hold people accountable, use the Constitution to the best of its ability to hold this executive accountable, but that’s not good enough, go beyond that and put out and agenda, give the country a choice. Give the people of this nation the choice they deserve, that they’re yearning for, like we had in 1980. And I go back to that election as the kind of an election I think we have to have, where we in Congress came up with whoever our nominee is going to be, to lay it right out there, this is what it’s going to take to get the country back on track, to rebuild our military, to fix our foreign policy, to grow our economy, to re-limit our government, and then to put in place the kind of structural reforms that are lasting and enduring, that reclaim the Constitution and rededicate ourselves to the separation of powers so that the next time some charismatic liberal progressive talks his way into the White House, he can’t abuse it like this done does.

Hewitt: Now Politico has an interview with President Obama today, in which the President tells Glenn Thrush the Republicans are way outside of the mainstream. What do you make of that?

Ryan: I think it’s projection. I think it’s the President trying to make it look like his program is where everybody is and mainstream. I think he lives in his own sort of fantasy land, and I think he sees the world as what he wishes it would be, thinks that that is what it is, when it actually isn’t, and then he talks and acts accordingly. Basically, what I think it is, is he’s trying to say that this is classic Alinsky, by the way. If you read the stuff that progressives read, which growing up in the shadow of Madison, Wisconsin, we learned this stuff. We read these books to understand the why and the way people are in the progressive party. They want to bait us into looking like reactionaries so that we can’t win elections. So the mantra is going to be we are the fringe, we’re out there, we’re angry, we’re un-relatable, so that we cannot build a national movement, a majority campaign, and win the Electoral College, win the presidency and keep Congress. The goal of Barack Obama in 2016 will have to be undoubtedly bait Republicans into being angry reactionaries so that they can’t win, so that the left, his successor, can win by default and cement his legacy.

Hewitt: Now if that’s in fact the plan, and he’s living in fantasy land, there are at least two other people named Clinton and Sanders there who are willing to go full Sweden. That’s what I call it.

Hewitt: And do you think there is anything close to a majority in America that wasn’t Democratic socialism?

Ryan: No, that’s why I’m excited. That’s why I’m optimistic. I really do not believe if A) given an alternative, and B) these ideas expose for what they actually are, the country will not choose that path. But you’ve got to give the country an actual choice. And that is what we, and the House Republicans, are going to do. We decided this year, we’re going to lay out a case for the country, a specific, bold, conservative pro-growth agenda for how we get us back on our axis, how we get our country back on track, here’s what it takes, here’s the plan, here’s what we will do if you give us the ability to do it. We’re asking the country for a mandate election by saying here’s what we will do if you give us a Republican president and a Republican Congress, so that when we get elected, and if you give us this ability, you hold us accountable for doing it. That’s what Reagan did in ’80, and it worked. And we affectionately refer to that time as the Reagan Revolution. And so we believe, because the country is on our side, the country does not want to be Sweden, the country wants the traditional American idea back, if we have an agenda that actually secures that, you know, does it in detail, and we lay it out there, we think we will win. And that’s what we intend to do.

Hewitt: I hope that happens. I’ll cover it in detail as it unfolds. But I also want oversight. And here’s what I want oversight on. On Friday on this program, former Secretary of Defense Robert Gates told my audience that Mrs. Clinton’s server was of deep concern to him, and he went on to say a high degree of probability the Russians and others were perhaps compromised it, but the Russians certainly had compromised it. Where are the oversight hearings on that server?

Hewitt: All right, now so you’re saying, do you believe that there is a problem here that could rise to the level of indictment, Mr. Speaker?

Ryan: I don’t know the answer to that question. So given that we are conducting objective oversight, it is not our interest to try and project. I mean, it is our interest to get to the facts, and not do anything to compromise a possible criminal investigation.

Hewitt: All right, that’s fair. That’s fair. Let me turn to our own party, then, and you’ve been the nominee of our party before. Right now, I think there’s a National League with Trump and Cruz in it, and an American League with Bush, Rubio, Christie, Kasich and Fiorina, and appropriately, that’s the designated hitter league, because they’re killing each other. What do you think is going on inside of our party with this sort of St. Valentine’s Day massacre of everyone?

Ryan: Yeah, well, I’ve never liked the designated hitter rule, to be honest with you. I’m not a fan of it. You know, you should play all sides of the game.

Ryan: Look, I try to not comment too deeply on this, because I’m neutral on the race. But I do worry about a conservative circular firing squad. All that does is play into the hands of the left and give them the election victory by default that they’re looking for. So what can we do about it, we in the House? We’re not picking sides. I’m sure some members of Congress endorse people, but we’re basically staying out of this, and we believe we can’t wait for a nominee to materialize in, say, July, to then go to the country with a mandate. It’s too late. That’s what I learned running with Mitt Romney for vice president. If you wait until the convention to roll out your platform, your plan and what you’re going to do, the die is cast, the trajectories are more or less locked in, and it’s too late. Hillary Clinton is the presumptive nominee on their side. She’s, you know, got a problem with Sanders now, but she’s basically playing for the general election. We have no clue who our nominee’s going to be. And so the way we see it, as conservatives who are so concerned about the direction of our country, who see this election as a generation-defining moment, we are going to get out there with an agenda beforehand, in the spring, ahead of the nominee, so that we are a party of ideas offering the country a clear choice.

Hewitt: Speaker Ryan, we look forward to covering that, as I said, in detail as it unfolds. Happy New Year to you, welcome back, thanks for joining us. I’ll be right back, America.