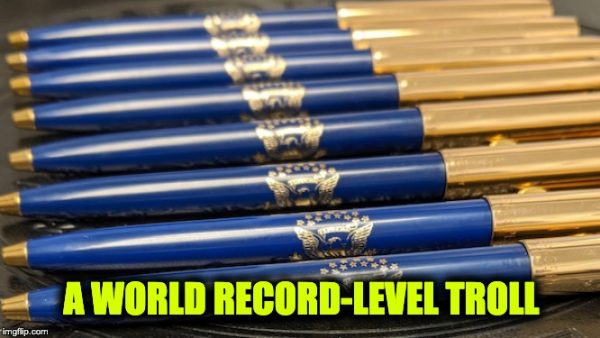 Johnson, a member of President Trump’s impeachment defense team, can apparently troll with the best of them.

“Just in case Speaker Pelosi is too torn up to hand out acquittal pens, I went ahead and picked some up for our exceptional impeachment defense team,” Johnson tweeted.

First off – a ‘torn up’ pun referencing the House Speaker’s staged temper tantrum at the State of the Union is a thing of beauty.

Second, Johnson is subtly blasting Pelosi for her not-so-subtle impeachment signing ceremony last month, an event which was decidedly not somber, serious, or prayerful.

Just in case Speaker Pelosi is too torn up to hand out acquittal pens, I went ahead and picked some up for our exceptional #impeachment defense team. @Jim_Jordan @RepDLesko @RepRatcliffe @RepStefanik @RepMarkMeadows @RepLeeZeldin @RepDougCollins pic.twitter.com/dSybiT6l6d

Nancy Pelosi was heavily criticized for holding an elaborate signing ceremony in which the articles of impeachment were passed to the Senate, despite insisting that it was a very somber thing the House had undertaken.

The event featured a myriad of golden pens handed out as mementos, smiles, picture taking, and fist pumps.

Senator Ted Cruz joked about the shiny, candy-like pens, deadpanning: “Given the circus in the House, I’m surprised she didn’t use crayons.”

Johnson celebrated not just with acquittal pens, but in an interview with NPR mocked the articles of impeachment as “weak on their face.”

“There was no real evidence or facts to back it up,” he said. “They [the House] did a shoddy job with it, and this was the ultimate result. And I think the record speaks for itself.”

Pelosi has earned every last drop of the condescension and mockery she has flowing in her direction right now.

In an interview with ABC News, prior to her impeachment pen debacle, Pelosi said: “Let’s be optimistic about the future, a future that will not have Donald Trump in the White House one way or another.”

“(In) ten months we will have an election if we don’t have him removed sooner,” she predicted. “But, again, he’ll be impeached forever.”

Conservatives ran with that comment and created their own trending hashtag on Wednesday, ‘#AcquittedForever.’

“Today, the sham impeachment attempt concocted by Democrats ended in the full vindication and exoneration of President Donald J. Trump,” White House Press Secretary Stephanie Grisham said in a statement. “As we have said all along, he is not guilty.”

We sure hope she wrote that statement using those fancy acquittal pens.