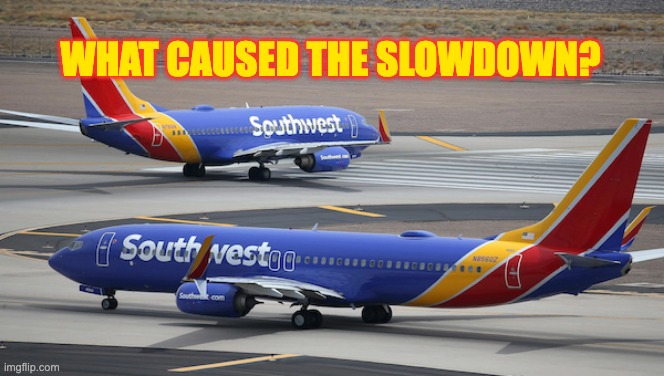 Southwest has long been one of the nation’s most beloved airlines, thanks to its price structure, quirky features, and friendly staff, but there isn’t enough of that last quality to go around at the moment. There aren’t enough flights to go around at this moment either.  The airline has canceled approximately 2,000 flights during the last several days. Southwest slowdown

The airline promises to have all the kinks worked out by the end of the week. But the real question is, what caused the kinks?

First, Southwest blamed problems with air traffic control and the weather, but those excuses don’t seem accurate. If they were true, it would have affected all airlines, not just Southwest.

When asked by CBS News if there was any chance the disruption could have been caused by pilots calling out sick over the company’s vaccine mandate, Capt. Casey Murray, president of the Southwest Airlines Pilots Association, said that was not the case and that the airline’s pilot sick rate for this weekend was “right in line with what was occurring this summer.”

“So outside of air traffic control and weather, you point the blame squarely where?” CBS News correspondent Errol Barnett asked.

The union head let the airline have it:

“Squarely on Southwest, I point to how they manage the network and how their I.T. also supports that network. Once a little hiccup occurs due to the internal processes, our pilots aren’t getting to where they need to be. We’ve been sounding this alarm for about four years and have seen very little approach to correcting it,” Murray said.

Southwest has been stuck between a rock and a hard place about the vaccine mandate.

According to Southwest CEO Garry Kelly, he opposes vaccine mandates, but they have to follow Biden’s mandate as a federal contractor.

The Dallas-based airline announced last week that all employees must be vaccinated by Dec. 8 due to the Biden administration’s vaccine requirement for federal contractors. Southwest has large contracts with the U.S. government to transport government officials and supplies.

“I’ve never been in favor of corporations imposing that kind of a mandate. I’m not in favor of that, never have been,” Kelly told CNBC’s “Squawk on the Street” on Tuesday before noting that the Biden administration rule forced his hand.

Even though it is based in Texas, Southwest announced that it would not comply with Texas Gov. Greg Abbott’s executive order banning all vaccine mandates because it doesn’t want to lose its federal contracts. “We would be expected to comply with the president’s order to remain compliant as a federal contractor,” a company spokesman said.

What’s behind the slowdown?  It doesn’t seem to be the weather or air traffic control, the airline didn’t blame the mandate, and the union head said there was no walkout. Therefore, my vote is on incompetence as outlined by Capt. Casey Murray. What do you think?