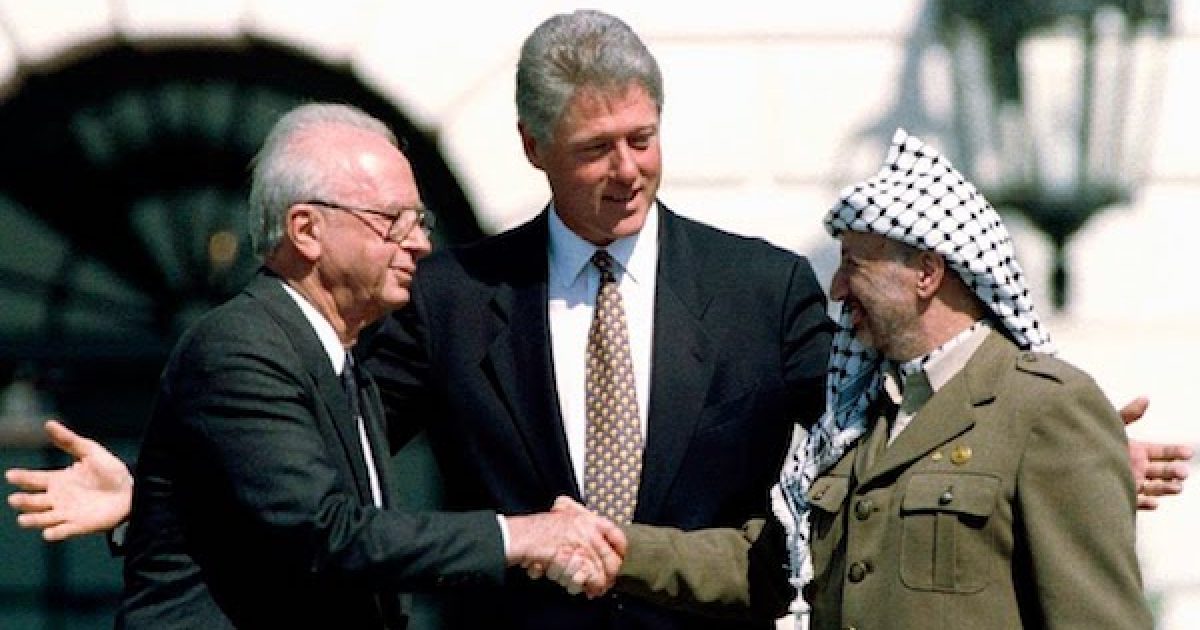 As part of a two-hour rant Sunday, Palestinian President Abbas declared that the Oslo Accords signed with Israel almost 25 years before were now dead. That was a false statement because those accords were dead before the ink on Yasser Arafat’s signature was dry.

That famous handshake on September 13, 1993. When I close my eyes, I can still see supposedly reformed terrorist Arafat, grasping the palm of Prime Minister Rabin. I remember saying the Shehechayanu prayer, thanking G-d for keeping me alive and letting me see this glorious day. The whole world was full of optimism. Even Clinton’s Secretary of State, the usually dour Warren Christopher stepped up to the microphone to gloat, saying that the impossible was now possible.

On that day, Israel supporters let themselves believe that 45 years of attacks against Israel peace were over; peace was finally within arm’s reach. Once the agreement with the Palestinians was finalized, there was no excuse remaining; the other Arab nations had to fall into line.

As part of Oslo, the two groups signed “Letters of Mutual Recognition”—the Israeli government recognized the PLO as the legitimate representative of the Palestinian people and the letters required that the PLO’s Palestinian National Charter (PNC) was to be amended to recognize Israel’s right to exist and renouncing violence.  But this was never done, and thus the original Charter stands to this day.

Twenty-five years after Oslo, Article 19 of the PNC still states, “the establishment of Israel is fundamentally null and void.”  Article 20 continues to deny the existence of the Jewish people as a nation and any ties that it might have to the Land of Israel. Which is a continued rejection of the original partition plan. UN Resolution #181 calls for the creation of Jewish and an Arab States.

The Oslo accords called for the Palestinians in Judea, Samaria, and Gaza to rule themselves, thus after it was signed, the Egyptian-born terrorist Yasser Arafat was allowed to travel to the disputed territories with the purpose of organizing a government and leading them to peace.

According to the Jerusalem Post (Nov. 18, 1994) from the very beginning, Arafat assured Arab audiences that his agreements with Israel are part of the PLO’s phased destruction of Israel plan adopted in 1974, which the PLO seeks to destroy Israel step by step: first by taking control of the administered territories, then by conquering the rest of Israel. On the very day he signed the Oslo accords, Arafat went on Jordanian television (which at the time was the only TV seen in the disputed territories) and explained the accords as a phase in the implementation of the 1974 plan.

Oslo didn’t stop terrorism, in the two years between the signing of Oslo and the assassination of Prime Minister Rabin, there were ten Palestinian terrorist attacks killing 75 Israelis and wounding another 242. The crazed zealot who killed the Prime Minister did so because he hated the Oslo Accords, but by killing Rabin he may have saved Oslo.

According to figures from the Jewish Virtual Library in the quarter of a century since Oslo, terrorism never stopped. From the signing of the Oslo Accords (Sept. 1993) until September 2000 – nearly 300 innocents were killed in attacks. During the second intifada (Sept. 2000-December 2005) 1,100 were murdered. And since December 2005, Palestinian terrorist attacks have claimed at least another 223 Israeli lives.

Twice since that signing ceremony in 1993, Israel offered the Palestinians a peace giving them almost everything they wanted, and each time the Palestinians refused. In 2000 Arafat walked away. President Clinton blamed Arafat after the failure of the talks, stating, “I regret that in 2000 Arafat missed the opportunity to bring that nation into being and pray for the day when the dreams of the Palestinian people for a state and a better life will be realized in a just and lasting peace.”

The Palestinians are still using their foreign aid to pay blood money to terrorists and their family. They still honor terrorists as national heroes naming buildings and stadiums with their name. In 2016, they even celebrated the 11,000th Israeli killed. Despite the accords, the Palestinian leadership never stopped calling for violence against innocent Israelis (sometimes they call it “Days Of Rage”). They still deny the Jewish connection to the holy land and even deny Jewish, Christian and Muslim theology by saying there were never Jewish Temples on top of the Temple Mount.

“The Official 1925 Supreme Moslem Council (Wakf) Guide Book To Al-Ḥaram Al-Sarif”, recognized the presence of the Jewish Temples atop the Mount.  Paragraph two on page four says, “It’s [the Temple Mount] identity with the site of Solomon’s Temple is beyond dispute.”

Now. 93 years later they are saying the Wakf was wrong.

This past weekend Palestinian President Mahmoud Abbas gave a two-hour long address where he called President Trump’s peace plan “a slap in the face” that “we will slap back.” Speaking of Trump, Abbas also said,  “May your house be destroyed.” I am sure that President Trump was not intimidated by the threat.

He claimed the Jews had no right to the land. That the Europeans, “wanted to bring the Jews here [to the Land of Israel] from Europe in order to protect European interests in the region. They asked The Netherlands, which then had the largest navy in the world, to relocate the Jews.” He even quoted an Egyptian writer who claimed that “Israel is a colonial project with no connection whatsoever to the Jews.”

Abbas added that “today is the day that the Oslo Accords end. Israel killed them. We are an authority without any authority and an occupation without any cost. Trump threatens to cut funding to the authority because negotiations have failed. When the hell did negotiations start?”

Sorry Mr. Supposedly Reformed Terrorist, but when did the Oslo Accords start? When did the PLO change its charter to renounce violence and recognize Israel’s right to exist? When Did the Palestinian leadership stop inciting its people to kill Israelis?  When did they stop claiming the Jews had no connection to the land? When did they stop walking away from peace proposals favorable to their positions?

The truth is that the Oslo accords made the words of Ze’ev Jabotinsky ring truer than ever: