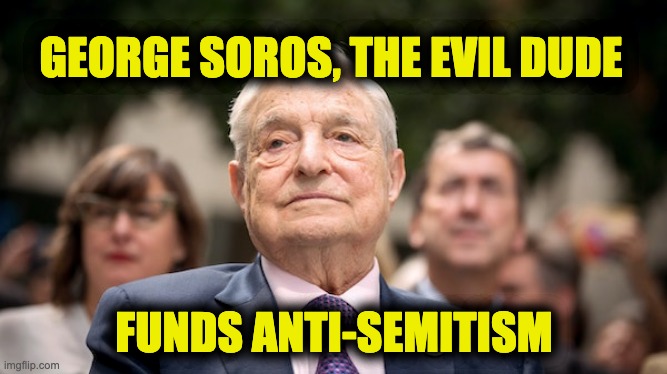 Here we go again! Every year or so, someone tells the truth about Billionaire George Soros and gets accused of pushing anti-Semitism.  These liberals protecting Soros forget that no one funds more anti-Semitic organizations than Soros, who I call “the evil dude.”

On September 16, Newt Gingrich was cut off the air on the Fox News show, “Outnumbered,” for merely mentioning the role that George Soros is playing in fomenting the anti-cop agenda of the left, via his campaign to elect far-left prosecutors, which is true.

Melissa Francis cut in, “I’m not sure we need to bring George Soros into this.” The former Speaker of the House replied, “He paid for it. Why can’t we discuss the fact that millions of dollars….” Gingrich was then cut off again, this time by Marie Harf, who took Francis’s side.

Since then, the liberal claims started that the attacks on Soros aren’t based on truth, they’re based on Anti-Semitism. Folks, George Soros is a real-life Dr. Evil. The only difference is that he’s more dangerous and not as funny. He has disrupted Democracy and Capitalism across the world. And he supports anti-Semitic causes around the globe.

Since 2001 the Soros network has given $2,688,561 to Adalah. According to NGO Monitor, Adelah describes itself as an “independent human rights organization.” Adelah has been instrumental in falsely accusing Israel of war crimes on numerous occasions, including contributing charges to the now-disgraced Goldstone Report and the fake 2002 report of an Israeli massacre in Jenin.  Adalah has also called on governments the world over to sever or downgrade their diplomatic relations with Israel.

Another favorite for Soros money is I’lam, is a Nazareth-based Palestinian media center. I’lam claims its mission is “to empower the Palestinian media landscape and society by promoting equal access to the Israeli media, encouraging a fair information-flow, and fostering professional standards.” Not stated in their mission but reported by NGO Monitor is that I’lam creates and promotes allegations of media bias in the Israeli media as part of its political agenda. I’lam received about $1.1 million from the Soros organization.

The New Israel Fund (NIF) is also listed as a recipient of Soros’ love, at least  $837,500 since 2009. The NIF donates money to anti-Israel groups dedicated to making false charges and/or promote the anti-Semitic BDS movement against the Jewish State, including Adalah, B’Tselem, Breaking the Silence, and Physicians for Human Rights, Social TV, and 972 Magazine, just to name a few.

Women Against Violence (WAV): received $1,430,000 of Soros. They are another group supporting the anti-Semitic BDS movement.

Along with advocating for the anti-Semitic Boycott, Divestment, and Sanctions (BDS) movement, Mada al-Carmel – Arab Center for Applied Social Research received $707K from Soros was one of the creators of the Haifa Document in 2007. The Haifa Document calls for a “change in the definition of the State of Israel from a Jewish state” and accuses Israel of “exploiting” the Holocaust “at the expense of the Palestinian people.”

Soros helped to fund The Woman’s March group, an organization is run by anti-Semites.

And let’s not forget that Soros helped to fund the creation of J-Street, the faux pro-Israel organization that is actually anti-Israel and supports the BDS movement. If you don’t want to believe me about J-Street, believe Democrat Alan Dershowitz.

Why would Soros, a Hungarian Jew who lived through the Holocaust, spend so much money on the anti-Semitic BDS effort to de-legitimize the Jewish State?  The best explanation comes from my late friend and teacher Barry Rubin:

Not all of the conspiracy theories about Soros are true. But his funding of liberal prosecutors and his support of anti-Semitic causes have been proven.  So don’t try to tell me that criticizing Soros is an act of Jew-Hatred. Criticize Soros for supporting Jew-Hatred.