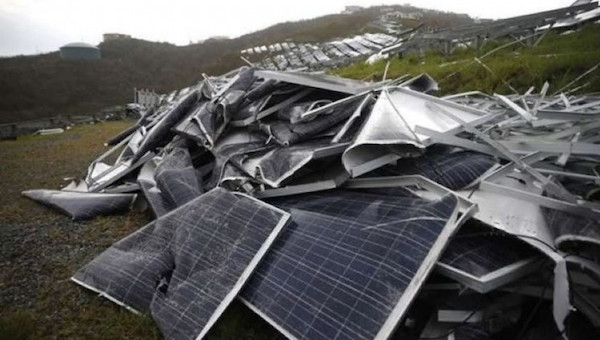 California’s obsession with forcing new homes to be equipped with solar panels has now created a toxic waste disaster in the region’s landfills.

Thus far, solar panels only last about 25 years. Since California began forcing builders to add solar panels to new homes starting in 2006, we are nearing the end of the lifespan of all the original panels.

Now, Californians are being forced to replace the old panels with new ones. That means the old ones have to be thrown away. Many still have time left, but soon enough, all of them will have to be replaced.

And THAT means the old ones will end up in the garbage dumps.

As Yahoo News noted, “Many are already winding up in landfills, where in some cases, they could potentially contaminate groundwater with toxic heavy metals such as lead, selenium, and cadmium.”

“The industry is supposed to be green,” Sam Vanderhoof,  a solar industry expert and chief executive of Recycle PV Solar says that only 1 in 10 panels are actually recycled, according to estimates drawn from International Renewable Energy Agency data on decommissioned panels and from industry leaders. Because, “in reality, it’s all about the money.”

Serasu Duran co-wrote a recent article in the Harvard Business Review that noted the industry’s “capacity is woefully unprepared for the deluge of waste that is likely to come.”

It’s not just a problem in California but also nationwide. A new solar project was installed every 60 seconds in 2021, according to a fact sheet published by the Solar Energy Industries Assn., and the solar industry is expected to quadruple in size between 2020 and 2030.

Although 80% of a typical photovoltaic panel is made of recyclable materials, disassembling them and recovering the glass, silver and silicon is extremely difficult.

The problem is getting worse showing that the so-called green movement is not really very green at all.