Bernie, AOC and Omar Calling For Sanctions to Be Lifted On Iran During Coronavirus Crisis 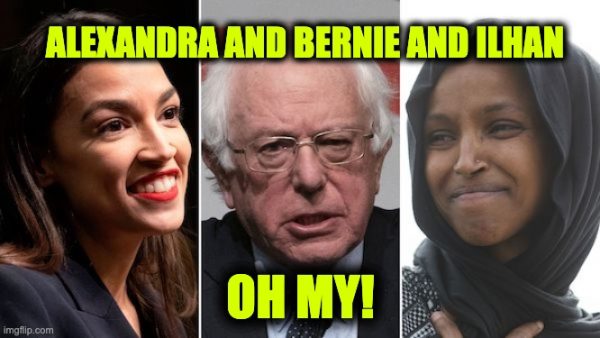 Bernie Sanders and some members of the far-left ‘Squad’ are calling on U.S. sanctions on Iran to be lifted during the coronavirus crisis. socialists lift Iran sanctions

A letter was sent to Secretary of State Mike Pompeo and Treasury Secretary Steve Mnuchin Tuesday, signed by Sanders, Reps. Alexandria Ocasio-Cortez and Ilhan Omar, and more than 30 other lawmakers.

The letter demands that the Trump administration “suspend sweeping U.S. sanctions on Iran that are hindering the country’s response to its massive coronavirus outbreak.”

A notion practically parroting the regime itself.

AOC took to social media, retweeting an article that said the goal of the group was “to suspend sanctions on Iran … despite … Trump’s claims of having made enough humanitarian concessions.”

Omar also hopped on Twitter to write that she “led the letter” and that “these sanctions aren’t changing the behavior of the Iranian government, but directly punishing innocent civilians.”

“Allowing this crisis to become more dire in Iran threatens significant harm not only to the people of Iran but also to people in the United States and around the world,” the group’s letter reads.

If Iranian leaders wrote the letter themselves, it would hardly read any differently.

Let’s instead ask Iran to cancel all terrorism during this crisis.

And cancel killing Americans in Iraq during this crisis.

Humanitarian aid is exempted in U.S. sanctions frameworks, including for Iran.

Surprisingly, not everybody is on board with lifting sanctions on a terrorist regime and hoping that any economic fruit being born out will be shared with the suffering people.

Foreign Policy Magazine writes that the coronavirus is “absolutely no excuse to lift sanctions on Iran,” referring to any such action as “pandering to a brutal regime.”

“Iran’s clerical dictatorship cares more about its own survival than it cares about the welfare of the Iranian people.”

The rogue regime has also failed to provide accurate numbers in the coronavirus plight, much as China has done. How is economic relief going to be foisted upon the people if they continually diminish the crisis at hand?

FYI, this campaign was shared by @NIACouncil, @lsarsour @IlhanMN & blame the #COVID19 outbreak in Iran on sanctions

Highlighting the aforementioned question, Iran has a well-documented record of diverting humanitarian goods to fund its terrorist operations.

“The trouble with leniency on Iranian sanctions,” Clarion Project writer, Shireen Qudosi explains, “is that Iran has been comparably complicit in secrecy and silencing of the true impact coronavirus has had on the country.”

“Leniency also does nothing to hold Iranian accountable for their conduct, domestically or internationally.”

3. The 32 members of Congress — including @Ilhan Omar — are not humanitarian good will agents. They are equal opportunists in human suffering, not realizing that steadfast accountability and consistency is key in dealing with rogue players.

Pompeo, for his part, has expressed a willingness to review the sanctions.

“We evaluate all of our policies constantly, so the answer is – would we ever rethink? – Of course.”

Additionally, at Wednesday’s CoronaVirus press briefing, Defense Secretary Esper explained the US offered to medical aid to Iran which they refused:

Well, first and foremost, we empathize with the Iranian people.  I mean, they clearly have been hit hard.  As you know, I — I think the President has spoken about it, certainly Secretary Pompeo.  We’ve offered assistance, we’ve offered medical supplies, et cetera.  They’ve refused that.  I — I think if the Iranian regime put more interest, in terms of taking care of their people in the context of this virus, they would be better served.

They don’t care about their people, the Iranian theocracy is simply trying for a political victory.