Snopes.com’s Problems Are Straight Out Of A Soap-Opera 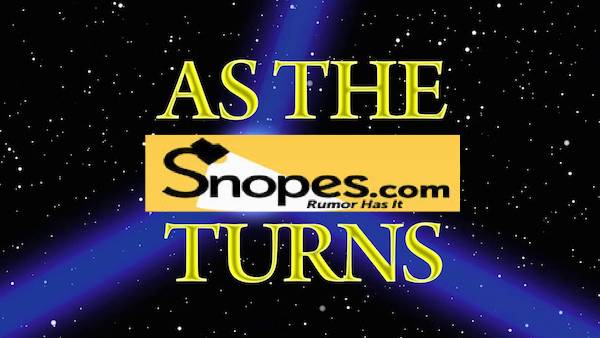 The liberal fact-checking site, Snopes.com has become an afternoon soap opera.  There is a battle for ownership, caused by a messy divorce between the formerly married couple who founded Snopes. One of the site’s founders has been accused of using company money to pay for the divorce, hookers, fancy trips and to make his new wife (an ex-escort) happy.

When it was first launched in 1994 Snopes was the go-to site for debunking urban legends such as the non-existent alligators living in the NYC sewer system, eventually, it grew to include internet hoaxes. Most recently Snopes has joined the liberal war on information, where “facts” coming from liberals are automatically true, and facts from conservatives are always questioned. The site is one of Facebook’s fact-checking partners in its attempt at addressing the spread of conservatism.

The site’s founders, former husband and wife David and Barbara Mikkelson, have been embroiled in a lengthy and bitter legal dispute in the wake of their divorce. As they started the company together each owned 50%. But Barbara sold her 50% to Proper Media a vendor responsible for hosting the site and selling the advertising.  The five principals of Proper Media split their 50% each getting a different stake but (according to Proper Media) vote as one.

During divorce proceedings, Barbara Mikkelson accused her ex of embezzling nearly $100,000 in company funds to spend on personal expenses and prostitutes. He is also accused of spending ‘tens of thousands of dollars’ on personal trips, including a honeymoon with his new wife (who used to be an escort in Las Vegas) to Tokyo Disneyland. Additionally, she requested that the court strict Mikkelson’s bank access, claiming his wild spending was going to deplete the company’s accounts.

All was good until the spring of 2017 when David fired Proper Media. As supposedly 50% owners they were not happy, so they fired David Mikkelson. But Mikkelson hired one of the “stockholders” away from Proper and contends he has a controlling share, but Proper contends they still get to vote as one. now there is an ugly legal battle that’s even more complicated than the above.

So now there is a real ugly legal battle and Snopes isn’t getting the ad revenue it needs to continue. Well, that’s what he says. Remember what his wife said at the divorce?

Proper Media insists that Mikkelson’s personal spending and mismanagement is to blame for Snopes’ money woes.

In legal papers filed in San Diego Superior Court, they say: ‘But while Snopes is built entirely around the concepts of transparency and truth, its founder, Defendant David Mikkelson (‘Mikkelson’) has engaged in a lengthy scheme of concealment and subterfuge to gain control of the company and to drain its profits.’

The company says Mikkelson unilaterally broke the advertising contract earlier this year and has bristled at shareholder efforts to rein in his spending.

They note that even as Mikkelson claimed to be under financial duress in court filings in June, he signed the documents while on a trip to Orleans, France.

‘If Mikkelson is permitted to continue unabated as a director of Bardav, he will irreversibly drain the company of important financial resources through personal and unnecessary expenditures,’ said Proper Media in the lawsuit.

The company also claims Mikkelson carried out ‘pervasive fraud’ at Snopes and used the accounts to pay for lavish trips and personal items while refusing requests from shareholders to examine his expenditures.

According to the lawsuit, Mikkelson spent ‘tens of thousands of dollars’ from the company on legal fees for his acrimonious divorce from Barbara last year, a drawn-out battle that included disputes over Mikkelson’s salary and alleged spending on prostitutes.

On Monday Snopes told readers it was in a deep financial crisis and posted about its legal battles saying in part:

We had previously contracted with an outside vendor to provide certain services for Snopes.com. That contractual relationship ended earlier this year, but the vendor will not acknowledge the change in contractual status and continues to essentially hold the Snopes.com web site hostage. Although we maintain editorial control (for now), the vendor will not relinquish the site’s hosting to our control, so we cannot modify the site, develop it, or — most crucially — place advertising on it. The vendor continues to insert their own ads and has been withholding the advertising revenue from us.

Our legal team is fighting hard for us, but, having been cut off from all revenue, we are facing the prospect of having no financial means to continue operating the site and paying our staff (not to mention covering our legal fees) in the meanwhile.

They started a go fund me page that had a goal of $500k and as of Wednesday evening had over $632K.  Reading about this soap opera, misuse of funds, and strange sale/ ownership battles should make conservatives even less comfortable that this liberal fact-checking site is helping Facebook determine what news is real and what is fake.

Will Barbara continue her plot of revenge against David? If David’s corporate funds are cut off and he can no longer travel, will new wife Elyssa Young continue to love him, or will she go back to selling her body? Will Proper Media gain control of the company or will they have to sell their coffee maker to replace the funds? And what of the Goldfish? Will the veterinarian be able to rescue them so long after they were flushed down the toilet? These and other questions will be answered….. As Snopes.com Turns