Till Then Many Are Stuck In Jail 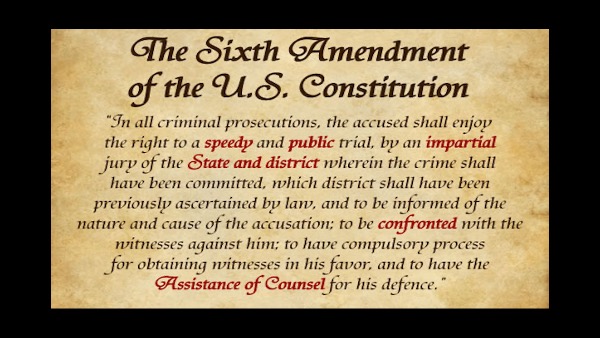 People with rap sheets as long as your arm walk free every day in Blue state cesspools, but these unconvicted citizens won’t even get a trial date for over a year after arrest. Sixth Amendment violations

So much for the presumption of innocence… and the Sixth Amendment right to a “speedy trial.”

The DOJ seems to be dragging its feet in sifting through the “evidence” against the January 6 rioters, some of whom have been in custody since January. More than 590 people have been arrested for what the Democrats and their comrades in the Corporate Media have continued to label an “insurrection” for six months.

Julie Kelly over at American Greatness has been excellent in her reporting what has been happening with the January 6 rioters.

Kelly’s latest report indicates that the DOJ attorney urged the judge to push the trial date for Timothy Hale-Cusanelli, an Army reservist who was arrested for his part in the January 6 riot, until 2022.

The lead attorney for the DOJ, Kathyrn Fifield, told Judge Trevor McFadden that it will take time to go through the “incalculable” amount video captured that day for proper discovery. This includes “at least 14,000 hours of surveillance video plus thousands of hours of body-worn camera footage from law enforcement” according to Kelly.

Judge McFadden and Hale’s court-appointed attorney, Jonathan Crisp, said to the DOJ last month that unless a plea arrangement was agreed upon, a trial would be set for later this year because Hale already has been incarcerated for more than six months. Fifield resisted a 2021 court date.

Fifield said, “If we do set a trial date, the government cannot meet discovery obligations until early 2022. That’s a conservative estimate.”

Despite the lack of evidence against him, Hale has been behind bars since January. He is not charged with any violent crimes but the Justice Department repeatedly—and successfully—has sought his pre-trial detention. (McFadden denied Hale’s release in March.)

An informant wore a wire to record a conversation with Hale about a “civil war” and military investigators interrogated nearly four dozen of Hale’s co-workers about his alleged “white supremacist” views. (My column explaining the case here.)

Hale was transported to at least five different prisons before arriving in early February at the D.C. jail specifically used to detain January 6 defendants. More than three dozen January 6 detainees are incarcerated at the D.C. Correctional Treatment Facility awaiting trial or plea offers.

Hang on a second… Is the DOJ saying that Hale has been in custody for 6 months and the DOJ is still sifting through the video for “evidence” of what he did?

Does that seem a little backwards to you? You’re not alone. Judge McFadden thinks the same thing. He’s also concerned about Hale’s Constitutional right to a speedy trial.

McFadden scolded the government for its backwards process. “You would not arrest [someone] then gather evidence later. That’s not how this works.” When Fifield said full discovery is in the best interest of the defendant, McFadden shot back: “Freedom also is important to the defendant.” The Trump-appointed judge raised concerns over Sixth Amendment violations. “This does not feel what the Constitution [and] the Speedy Trial Act envisions.”…

…“No January Sixer should be made to suffer in a jail cell while the DOJ continues to delay discovery simply because it can,” one defense attorney told me by text this afternoon. “This is unprecedented, unreasonable, unconstitutional, and wrong.”
Source: American Greatness (Emphasis Added)

By the nature of the DOJ’s argument, it’s pretty obvious that Hale is probably not the only person accused of criminal behavior on January 6 that this is happening to.

The DOJ has been rather tight-lipped about what is going on with the people detained for the Jan. 6 riot, and there have been reports of mistreatment. Even Republicans in Congress can’t seem to get answers.

On Thursday, a group of Republican members of Congress decided to go to the detention facility in D.C. and see for themselves what was going on. Reps. Louie Gohmert (TX), Matt Gaetz (FL), Paul Gosar (AZ), and Marjorie Taylor Greene (GA) were denied entry and accused of trespassing by a guard when they attempted to enter the building.

BREAKING: The DC Department of Corrections locked out multiple Members of Congress from reviewing the conditions of the January 6th prisoners.

What are they hiding?

Let’s not forget that back in 2016, all over the country there were “mostly peaceful” protests — and some riots — after Trump beat Hillary.

On Inauguration Day in 2017, Washington D.C. was trashed and 217 people were arrested, but January 6th was “the worst threat to democracy since the Civil War” according to the left. It’s not a surprise that they don’t seem to remember all the way back to 2017 when a Bernie Bro opened fire on Republicans at a Congressional baseball practice and nearly killed Rep. Steve Scalise. That’s not a “threat to democracy” for Democrats, apparently.

No one who has been arrested for the Jan. 6 riot has been charged with “insurrection” despite the constant bleating of the word in the media.  Many have been charged with “knowingly entering or remaining in any restricted building or grounds without lawful authority” — so, trespassing. Just like what the Members of Congress were accused of doing at the detention facility. It’s amazing that none of them were arrested since it’s such a heinous crime.

It’s clear that rioters on the left and rioters on the right are treated very differently. In Portland, Antifa can try to burn down a courthouse night after night, get arrested, and get released in time for the next arson attempt. And this continues to go on for more than a year.

Don’t forget, BLM rioters were bailed out by a fund pushed by Vice President Kamala Harris and Biden’s staffers. Some of the people bailed out were accused of violent felonies, murder, and sex crimes.

Clearly some of the January 6th rioters broke the law but they should be arrested until the evidence has been compiled and the DOJ has no right to commit Sixth Amendment violations.

While the Democrats and the Corporate Media hacks continue to call January 6 a “deadly insurrection” the only person that died that day that was not from natural causes or suicide, was Ashli Babbitt, an unarmed Trump supporter who was shot by a Capitol Hill police officer who has not been officially identified.