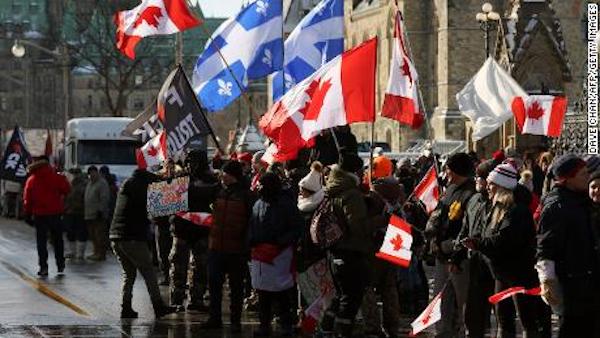 It appears as though the Canadian government has quite a sore spot for the demonstrations surrounding the Freedom Trucker convoy, and their indiscriminate desire to punish those who supported them has now jumped the shark.

The convoy, which saw a vast number of over-the-road truckers park their big rigs in the Canadian capital of Ottawa in recent weeks, began as a protest against a new law that would require any truckers who cross back into Canada from the United States to quarantine for a minimum of 14 days – unless, of course, they were vaccinated.

The uproar saw Canadian citizens from coast to coast chip in to move the protests forward, some using online fundraising sites like GoFundMe.

But as the Canadian government began to crack down on the truckers, they also began cracking down on those who supported them financially – no matter how poor it would make them look.

A Canadian MP says the bank account of a single mom with a minimum wage job has been frozen after she donated $50 to Freedom Convoy.

Conservative lawmaker Mark Strahl says the mom, named only as Briane, has had her life ruined for donating the small sum to the anti-vaccine mandates protest.

Strahl shared Brianne’s story as concerns grow that scores of ordinary people will no longer be able to pay for food and basics after their accounts were frozen for donating to a group of protesters.

The story is simply insane.

‘Briane is a single mom from Chilliwack working a minimum wage job. She gave $50 to the convoy when it was 100% legal. She hasn’t participated in any other way. Her bank account has now been frozen. This is who Justin Trudeau is actually targeting with his Emergencies Act orders.’

With the Freedom Truckers having long suggested that Canada’s latest vaccine push was bordering on “tyrannical”, the freezing of a bank account for a $50 donation to any political cause certainly isn’t helping to refute those accusations.