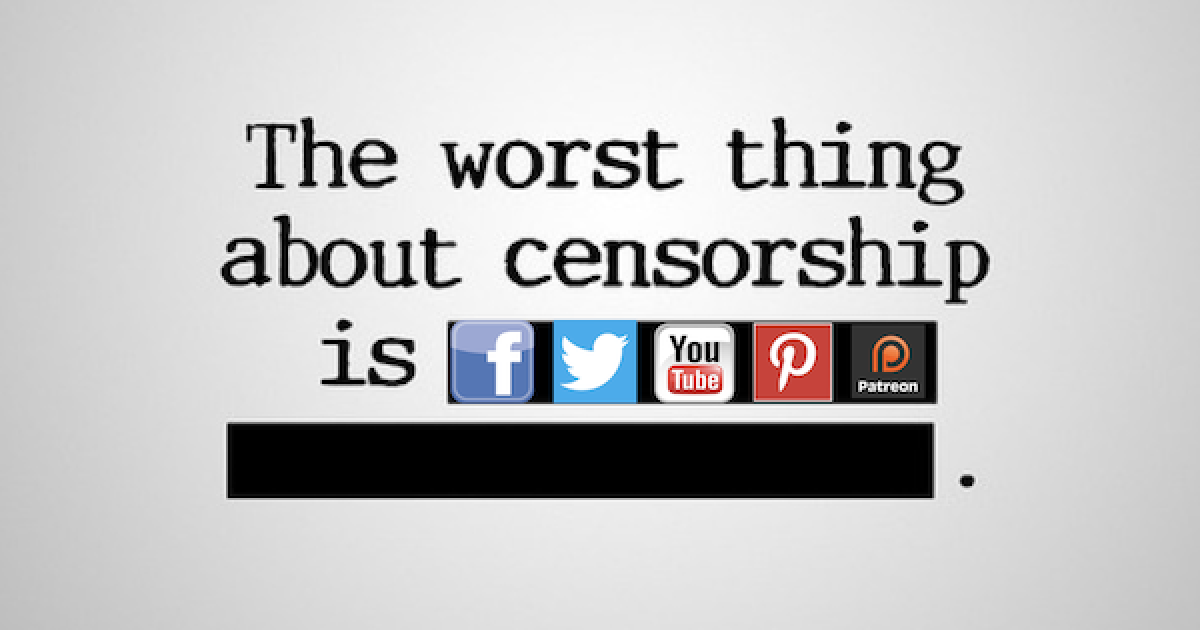 Two reports released on Wednesday indicate that the anti-free speech cabal known here as the “Silicon Valley Axis of Evil” has gone “full Orwell” in its ongoing war against conservative and Pro-Trump speech online.

The first report comes from TechCrunch, which said Facebook may actually begin to proactively shut down groups or pages even though they haven’t done anything to violate the site’s nebulous community standards:

…Facebook says it’s seen an increase in people using their existing Pages to duplicate the content that had been pulled down from Pages that were banned for violating Facebook’s Community Standards.

While it had policies that prohibited people from creating new Pages (or groups, events, accounts, etc.) for this purpose, it hadn’t been proactively policing the use of existing Pages — and that, effectively, became a loophole for the violators to abuse.

In other words, if Facebook believes the other Pages and Groups will be used as the new home for the content found to be in violation, it will proactively remove them… before they actually do so.

“That’s likely to cause some debate,” TechCrunch said.

Facebook, the report said, will make the “determination based on a broad range of factors — like if the other Pages or Groups have the same admins or a similar user name, for example.”

The next report comes from Breitbart, who tells us that Microsoft is now integrating NewsGuard into mobile versions of its Edge browser, ostensibly with the idea of protecting users from so-called “fake news.”

Without consulting with its users, Microsoft has installed an establishment media browser extension, purportedly designed to rate the accuracy of news websites, as a default extension on mobile versions of its Edge browser. In practice, it creates a news blacklist by warning users away from sites including Breitbart News, The Drudge Report, and the Daily Mail.

The browser extension, called “Newsguard,” presents users with a red warning label if they navigate to a website that it judges to be unreliable. A “green” rating is given to websites that NewsGuard considers trustworthy.

A number of pro-Trump websites, including Breitbart News, are given a “red” rating by the extension.

The UK Daily Mail also has a “red” rating, with NewsGuard claiming it “fails to maintain basic standards of accuracy and accountability.”  Wikileaks, a site which Breitbart said has never had to retract a story because of false or misleading information, is also given a “red” rating by NewsGuard.

Some left-wing sources are given “red” ratings by Newsguard. However, they tend to be on the anti-establishment side of Democratic politics: ShareBlue and the Daily Kos, for example, both have “red” ratings. Salon and the Huffington Post, however, do not.

It shouldn’t be surprising that Newsguard has a bias against independent and anti-establishment media though: the team behind the browser extension include top neocons and members of America’s foreign policy establishment, including Trump-hating former CIA director Michael Hayden, and former members of the Clinton, Bush, and Obama administrations.

It doesn’t take a rocket scientist to see what’s happening here.  Authoritarian Axis powers are more determined than ever to silence anyone with a point of view it doesn’t like and will do anything to achieve its ultimate goal of turning the Internet into something that more resembles George Orwell’s dystopian novel “1984.”

As a final note, Breitbart said it reached out to Microsoft for comment.