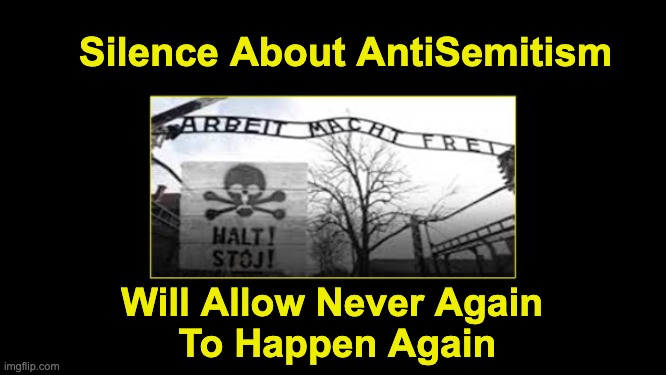 January 27th is International Holocaust Remembrance Day. Ironically it’s a day created by the United Nations to remember and honor the 6 million Jews and millions of others put through the horrors and murdered by the Nazis. Sadly, Antisemitism wasn’t a short-lived scourge that existed only during the brief period when the Nazis held power. silence about Antisemitism

The hatred of Jews has afflicted people of diverse ethnicity, religions, and political views for around 3,800 years. Ever since, as described in the book of Exodus,” there arose up a new king over Egypt, which knew not Joseph.” His excuse for making the children of Israel slaves is still used by anti-Semites today— dual loyalty.

“He [Pharaoh] announced to his people, ‘Behold the Israelites are becoming too numerous and strong for us. We must deal wisely with them. Otherwise, they will join our enemies and drive us from the land.’” (Exodus 1:9-10)

How different were the Pharaoh’s words from this:

Our democracy is built on debate, Congresswoman! I should not be expected to have allegiance/pledge support to a foreign country in order to serve my country in Congress or serve on committee. The people of the 5th elected me to serve their interest. I am sure we agree on that! https://t.co/gglAS4FVJW

Even the Jewish members of Congress, such as Jerrold Nadler and Chuck Schumer, refused to condemn Omar’s Jew-hatred. Their silence helped Antisemitism grow like a cancer overtaking many Democrats in Congress. Yet the media is silent about the Jew-hatred.

Much of the mainstream Antisemitism is coming from the left-wing of the Democratic Party. Even even worse are the Democrats and leftists who aren’t anti-Semitic. Democrats and leftists who are not anti-Semitic feed the hatred by cowardly refusing to expose and/or fight the Antisemitism rampant in their ranks. And the mainstream media Democratic Party sycophants protect the hatred by rarely reporting about the Jew-hatred.

Former President Barack Obama is an anti-Semite, but you wouldn’t know it from the adoring media. For example, during the selling of the Iran deal, Obama had a phone call with Jewish leaders. William Daroff, Senior Vice President for Public Policy & Director of the Washington office of The Jewish Federations of North America, tweeted about what Obama was saying. “Jews are leading effort to kill #Irandeal. Same people opposing the deal led us into Iraq war. Daroff followed with “Canard: Jews got us into Iraq War.”

Obama refused to recognize the Antisemitism of others. Radical Islamists attacked the Kosher supermarket Hyper-Cacher (French for Super Kosher) in Paris on a Friday afternoon. The attack happened just before the Jewish Sabbath when they knew it would be crowded with Jews buying food for their Sabbath dinners. Obama first insisted it wasn’t an anti-Semitic act. When the world leaders came together to march in Paris to protest against the Charlie Hebdo shooting and the anti-Semitic Hyper-Cacher attack Obama was conspicuous in his absence.

During his presidency, Obama allied himself with Al Sharpton, a favorite of liberals. Sharpton has made a career of spewing hatred of Jews. Yet he had a TV program on MSNBC, during the 2020 primary season, every Democratic Party candidate met with him to “kiss his ring.” When the anti-Semitic Sharpton celebrated his 65th birthday in 2019, New York Governor Cuomo and Senator Schumer went to the celebration to praise the Jew-hater.

Speaking about Senator Schumer, he talks about being Jewish all the time, but when someone in his Party spews Antisemitism, he is silent.!

The #3 guy in the House Democratic Caucus, Rep. James Clyburn, often uses the Holocaust as a political weapon. Clyburn’s constant hyperbolic references to Hitler and the Holocaust cheapen the memory of the actual horrors of the millions of people whose suffering we remember today. I’ve contacted TV anchors about to interview Clyburn, sent them the evidence, and asked them to bring his inappropriate use of the Holocaust as a political weapon. But the interviewers and the rest of the media were silent.

Former President Obama and other Democrats, including Maxine Waters (D-CA), Al Green (D-TX), Barbara Lee (D-CA), and seventeen other Democratic members of Congress, had very friendly meetings with racist, anti-Semite Louis Farrakhan, known for his Antisemitism and his Holocaust revisionism:

I don’t believe President Joe Biden is an anti-Semite like is former boss Obama. However, he loaded his staff with Israel-haters and Anti-Semites.

Even the ADL, which was supposedly formed to protect Jews from prejudice, refuses to point out the Antisemitism of leftists. In  2011, Foxman’s ADL and the AJC led an effort to beg Jews not to criticize Barack Obama’s anti-Semitic policies. They claimed they didn’t want Israel to become a wedge issue, but they really wanted silence about Antisemitism.

When anti-Semitic Keith Ellison was running to be the head of the Democratic Party, many bloggers profiled Keith Ellison. They warned about his track record of Antisemitism association with Muslim Brotherhood groups such as MAS, CAIR, and ISNA. (MAS even paid for his Haj to Saudi Arabia), his anti-Israel actions in the House and association with other anti-Semitic organizations. In a confusing statement, the CEO of the Anti-Defamation League, Jonathan Greenblatt, said that Ellison had taken positions that concern him, but didn’t he didn’t rip into Ellison (a Democrat). That’s because beginning with the leadership of Abe Foxman, the ADL wanted its leadership to become leaders in the progressive movement, and they never met an anti-Semitic liberal they didn’t try to protect. Greenblatt warned people not to slander him based on his race or faith at the end of his statement. But unless he couldn’t read, Greenblatt knew that the criticism of Ellison had nothing to do with his race or religion. The criticism of Ellison was based on his hatred of the Jewish faith. The real purpose of Greenblat’s statement was to urge silence about Antisemitism. After all, the ADL never met a liberal anti-Semite…

You don’t hear much about Republican Party Jew-hatred. That’s because most of the Antisemitism in America comes from the left, where the mainstream media also resides. The Democrats who aren’t anti-Semitic and their media sycophants are silent. Because there is no pushback or punishment, their silence allows the Antisemitism to grow.

After the murder of Reverand Martin Luther King Jr., the people who took over the Civil Rights movement from Drl King led liberalism and eventually many Democrats into Antisemitism. That is where many of them reside today. But nobody complains. The only thing heard is crickets.

On this Holocaust Remembrance Day, people of all faiths need to remind the Democrats and their mainstream media sycophants that their silence is making people forget, “never forget.” All good people need to speak out and ensure that “never again” has meaning,

And if the good people are too frightened to speak out, remind them of the famous words of German Lutheran pastor Martin Niemöller: