Sigd: The Jewish Holiday Most Americans And Jews Don’t Know, BUT SHOULD

A National Holiday In Israel, Sigd Originated With The Jewish Community In Ethiopia And Is Expanding Worldwide 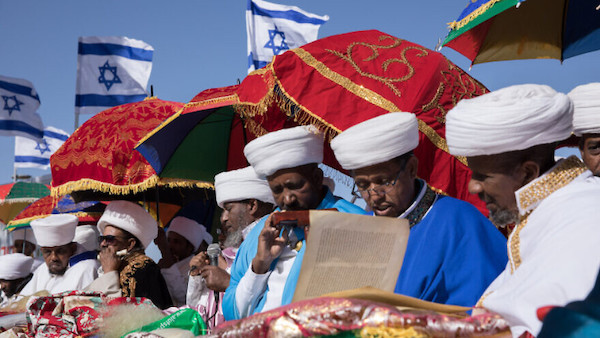 Sigd is a Jewish holiday originating with the Ethiopian Jewish community. In 2008, it became a national holiday in Israel and has begun to spread to other Jewish communities. The name of the holiday Sigd is derived from the Hebrew word for prostration, “sigda.” This unique holiday takes place fifty days after Yom Kippur, which is the 29th of the Jewish month of Cheshvan. The holiday recognizes the Jewish covenant with G-d created by receiving the Torah at Mount Sinai and the Torah’s re-acceptance upon returning to Judah from exile in 538 B.C.E led by Ezra the Scribe before the construction of the Second Temple.

Seeing that Sigd may be almost completely unknown in the American Jewish community — and wanting to correct that — the Atlanta Israel Coalition, along with co-sponsor Herut North America, hosted a Zoom webinar on November 13, 2020, to gain a better understanding of the importance of this deeply spiritual holiday, which has been celebrated for thousands of years connecting the Ethiopian Jews to G-d. The webinar,  “Celebrate Sigd – An Ethiopian Jewish Holiday,” was presented by Naftali Aklum. Herut’s participation was organized by longtime pro-Israel, Zionist activist Larry Shepherd. The webinar was viewed live on Facebook by people from all over the world.

Naftali gave a brief history of the Jews in Ethiopia. The main part of the event was Naftali describing the riveting details about the harrowing journey his family and thousands of other Ethiopian Jews took by foot to flee a famine-ridden and politically dangerous Ethiopia through Sudan to make Aliyah to Israel. Naftali was also a consultant for the 2019 action movie “The Red Sea Diving Resort,” which recounts how the mission to rescue Ethiopian Jews, known as “Operation Moses” came to be because his older brother, Ferede Yazezow Aklum Z”L, was among the first people to make the journey. He went back and forth hundreds of times, risking his life on rescue missions. “The Red Sea Diving Resort” can be found on Netflix.

Some of the fascinating traditions of Sigd that Jews followed when they were still in Ethiopia and before their aliyah to Israel are that they would climb up to a high mountain which represented Mount Sinai and face Jerusalem to intensely pray and become closer to G-d. This was not a joyous or happy day, but a day of fasting, Torah, and prayers to return “Home to Israel.” After their prayers were answered and made their lives in Israel, Sigd is considered a much more joyous holiday. They celebrate that G-d brought them Home to Zion. Today, Ethiopian Jewish leaders are working to make Sigd a holiday for all Jews worldwide to celebrate with prayers to bring peace and unity to the Jewish people. Throughout the history of the Jewish people, we have learned that in unity, there is strength.

Naftali emphasized that one of the main problems that make it difficult for unity to grow is that “we don’t know enough about each other.” His mission is to educate people about the story of the Ethiopian Jews and promote pride in Jewish identity. He recounts his experience going back to his village in Ethiopia as an adult, and he said that experience made him realize who he is. He says, “I’m Jewish, I’m Israeli, and I’m a black man. When you take all those identities within you and create a strong identity, you know you’re worth something, and then people will look at you the way you see yourself.” Naftlai emphasized that it is important that everyone spread his message to their children, their families, and friends because only when we educate people will we begin to see change and unify as a people.

Atlanta Israel Coalition’s Founding Executive Director, Cheryl Feingold Dorchinsky, said, “Naftali’s presentation was so inspiring because he was passing on a message of pride, of tradition and connecting to people, some who are struggling with their identities. The Atlanta Israel Coalition is proud to provide a vehicle to pass on his message. Together, our voices are louder, our light shines brighter, and we can be a greater force for good within our communities and across the globe.

Atlanta Israel Coalition’s co-sponsor, Herut North America, is an international movement for Zionist pride and education and is dedicated to the ideals of  Zionist leader and philosopher Ze’ev Jabotinsky. Jeff Dunetz (The Lid) is an active member of Herut. You can learn more about Herut and join him as a member at https://herutna.org/