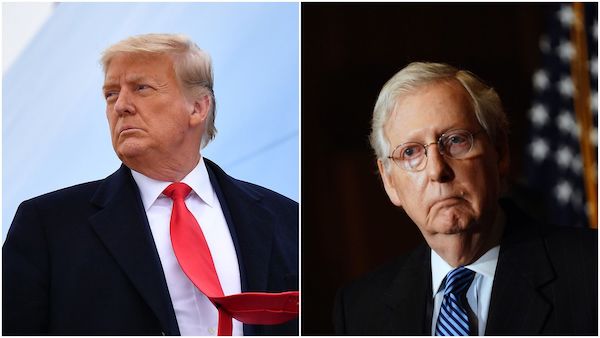 siding with Trump over establishment

Does this really surprise you? After, all the establishment is behind the four years of Trump-hate including impeachment.  There are some establishment GOP “leaders” that just want to play nice with the Democrats in the Beltway and keep the swampish “Uni-Party” of globalists and sellouts in power in perpetuity.

I’ve heard it said many times that it’s stunning how much the GOP hates their own base. I think that’s true in many cases. The Tea Party was a backlash against that kind of thinking and so was the election of Donald Trump as the nominee in 2016.

Trump was a political “outsider” that shook that mess up when he ran for office saying all of the things that so many right-wing voters were saying. We were frustrated with the stagnant government that seemed to hate all social conservative policies, kept shunting concerns about the southern border to the future, didn’t care if jobs were outsourced to China, or that domestic policies continued to tilt to the left.

President Trump listened to the voters that the Paul Ryan wing of the GOP did not. That’s why so many people love this president so much.

According to the latest Ipsos/Axios poll, GOP voters are siding with President Trump rather than the establishment GOP — even as he was being impeached for a second time.

The state of play: A majority of Republicans still think Trump was right to challenge his election loss, support him, don’t blame him for the Capitol mob and want him to be the Republican nominee in 2024.

Why it matters: The survey shows why Trump could run again in 2024 (and possibly win) if he isn’t convicted — or banned from holding federal office — by the Senate. It also shows the peril and opportunity for institutionalists like McConnell trying to reclaim the GOP.

In addition, it helps explain why a majority of House Republicans voted against certifying the election, and against impeachment.

It’s pretty clear that although the self-identified Trump supporters are roughly one-third of the Republican Party, they are a seriously committed group of voters. 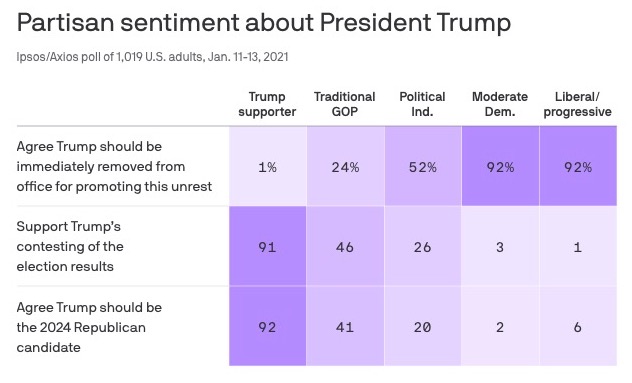 The question is… what does this mean for the future?

Will Trump supporters stay in the GOP and vote for the same sorts of people that used to just ignore and now despise them? Or will they push the party to adopt some of the Trump policies that were so effective in the past 4 years?  Mitch McConnell needs to start reaching out to the MAGA supporters. For the GOP to ever win the presidency again, he has to motivate them to vote for his party.

Whatever happens, the GOP will never be quite the same after President Trump, and in my opinion, that’s not a bad thing.
Cross-posted with Clash Daily.
Facebook Twitter Flipboard