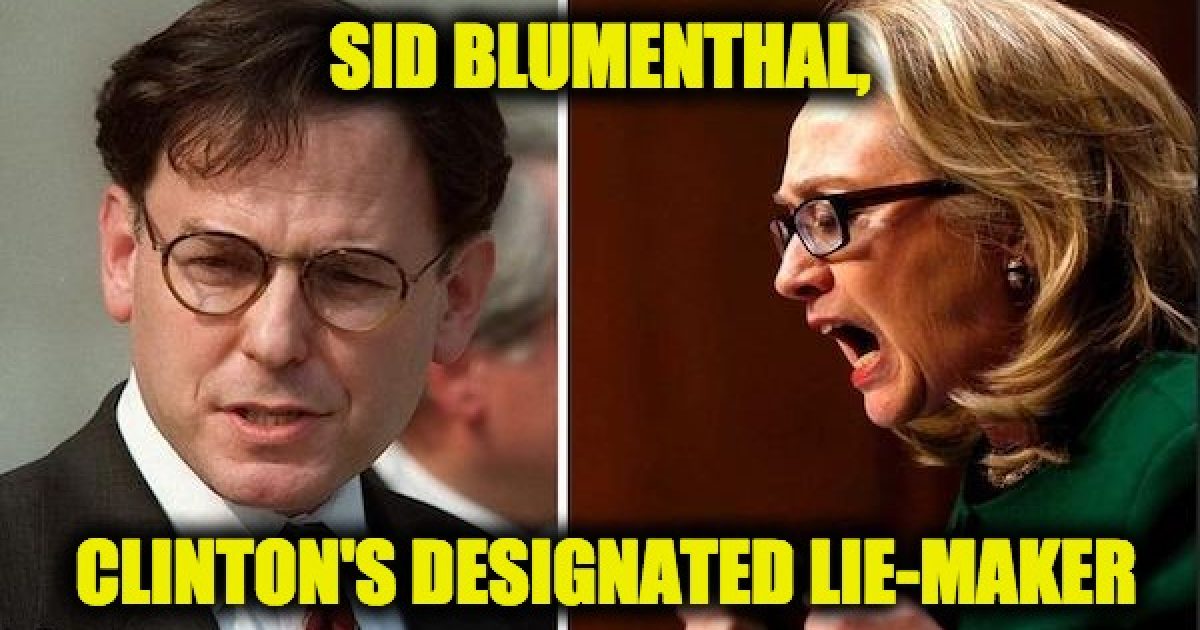 Tuesday’s revelation that Sidney Blumenthal was the team Clinton source, feeding information to anti-Trump dossier creator Christopher Steele is not surprising. Sid Blumenthal former journalist, close adviser to Hillary Clinton and the man whose email account led hacker Guccifer into Hillary’s private email server, has spent much of the past 37 years acting as a political hit man, and designated lie inventor for Bubba and Hillary Clinton. Even when he was banned from working at the State Department by President Obama, Blumenthal did his best to advise Hillary about Libya where he had financial interests and to send the former Secretary of State the latest musings about Israel from his anti-Semitic son Max.

Sid Blumenthal is not a newcomer to the creation of political fantasies. Along with being Steele’s contact he was the man behind the anti-Obama birtherism and there is some evidence that he may have been the person behind the Benghazi YouTube video lie. While he banned from working for Obama he must have had strong contacts there, beyond Hillary because seven weeks before Jim Comey made his speech about not recommending a Clinton indictment he promised she would get off. Sid gave the same reason for her exoneration that Comey would give, the lack of intent.

The Obama was born in Kenya nonsense started with a whisper campaign waged by Sid Blumenthal.

In September 2016, James Asher who worked for McClatchy newspapers in 2008 tweeted out (his page is no longer active):

Later Asher  sent an email to his former colleagues expanding his account beyond the 140 character twitter limit:

“During the 2008 Democratic primary, Sid Blumenthal visited the Washington Bureau of McClatchy Co.,” Asher said in an email to McClatchy, noting that he was at the time the investigative editor and in charge of Africa coverage.

“During that meeting, Mr. Blumenthal and I met together in my office and he strongly urged me to investigate the exact place of President Obama’s birth, which he suggested was in Kenya. We assigned a reporter to go to Kenya, and that reporter determined that the allegation was false.

“At the time of Mr. Blumenthal’s conversation with me, there had been a few news articles published in various outlets reporting on rumors about Obama’s birthplace. While Mr. Blumenthal offered no concrete proof of Obama’s Kenyan birth, I felt that, as journalists, we had a responsibility to determine whether or not those rumors were true. They were not.

After Asher explained his experience Sid Blumenthal contacted the Boston Globe via email and vehemently denied the story. “This is false. Period,’’ Blumenthal wrote.
But during the 2008 primary season it was no secret that Blumenthal was doing everything he could  trying to smear Obama. Blogging for Huffington Post, Peter Dreier wrote all about it in May 2008;

Almost every day over the past six months, I have been the recipient of an email that attacks Obama’s character, political views, electability, and real or manufactured associations. The original source of many of these hit pieces are virulent and sometimes extreme right-wing websites, bloggers, and publications. But they aren’t being emailed out from some fringe right-wing group that somehow managed to get my email address. Instead, it is Sidney Blumenthal who, on a regular basis, methodically dispatches these email mudballs to an influential list of opinion shapers — including journalists, former Clinton administration officials, academics, policy entrepreneurs, and think tankers — in what is an obvious attempt to create an echo chamber that reverberates among talk shows, columnists, and Democratic Party funders and activists. One of the recipients of the Blumenthal email blast, himself a Clinton supporter, forwards the material to me and perhaps to others.

In May 2015 the State Department released 850 pages of Hillary Clinton Benghazi-related email documents. The NY Times reviewed the ones having to do with Clinton Family buddy Sidney Blumenthal. As part of the treasure trove of emails is this paragraph on a correspondence sent by Blumenthal to Clinton on 9/12/12 right after the attack.

Mr. Blumenthal sent Mrs. Clinton a memo with his intelligence about what had occurred. The memo said the attacks were by “demonstrators” who “were inspired by what many devout Libyan viewed as a sacrilegious internet video on the prophet Mohammed originating in America.” Mrs. Clinton forwarded the memo to Mr. Sullivan, saying “More info.” (Pages 193-195)

Blumenthal was getting help gathering his intelligence from Tyler Drumheller, a former CIA operative who had a reputation for not being honest.

From the beginning, there were rumblings that Drumheller’s account of what happened leading up to the Iraq war was self-serving and inaccurate. In 2007, former CIA director George Tenet—who headed the agency under both Bill Clinton and George W. Bush—published a memoir, At the Center of the Storm: My Years at the CIA. Tenet took several pages of the book to attack Drumheller’s claims in detail, explicitly questioning his honesty and even citing the recollections of other agency employees to poke glaring holes in Drumheller’s recounting of events.

The story gets better  because on 9/13 the day after the attack, Blumenthal sent another email saying it was a terrorist attack planed a month earlier:

The next day, Mr. Blumenthal sent Mrs. Clinton a more thorough account of what had occurred. Citing “sensitive sources” in Libya, the memo provided extensive detail about the episode, saying that the siege had been set off by members of Ansar al-Shariah, the Libyan terrorist group. Those militants had ties to Al Qaeda, had planned the attacks for a month and had used a nearby protest as cover for the siege, the memo said. “We should get this around asap” Mrs. Clinton said in an email to Mr. Sullivan. “Will do,” he responded. That information contradicted the Obama administration’s narrative at the time about what had spawned the attacks. Republicans have said the administration misled the country about the attacks because it did not want to undermine the notion that President Obama, who was up for re-election, was winning the war on terrorism. (Pages 200-203)

Of course because it was near the 2012 election Clinton stuck with the first report, after all Hillary wanted Obama to win so he could help her in 2016,

How The Hell Did HE Know?

In May 2016 shortly before Jim Comey was going to let Hillary off he hook, Blumenthal was interviewed on CNN’s New Day and gave the impression he had  inside knowledge about the FBI’s investigation into the former secretary of state’s private email server:

CNN’s Alisyn Camerota on “New Day” told Blumenthal that many Democrats she has talked to fear there is “bombshell” in the wings that could wreck Clinton’s campaign.
“I’m very confident that will not happen,” Blumenthal said. “My understanding is that this is a security review. It’s certainly not a criminal investigation. It’s an inquiry into whether anyone intentionally put classified information where it shouldn’t be.”
Blumenthal, who this week on MSNBC would not say if federal investigators have talked to him about the emails, said he believes that the Justice Department will soon release a statement saying that no intentional harm was done by Clinton’s use of the private server during her tenure as secretary of state.

Remember when Comey cleared Hillary he said that the former Secretary of State didn’t have the intent to break the law, despite the fact that intent is not needed to prove the crime of gross negligence:

Although there is evidence of potential violations of the statutes regarding the handling of classified information, our judgment is that no reasonable prosecutor would bring such a case. Prosecutors necessarily weigh a number of factors before bringing charges. There are obvious considerations, like the strength of the evidence, especially regarding intent. Responsible decisions also consider the context of a person’s actions, and how similar situations have been handled in the past.

In looking back at our investigations into mishandling or removal of classified information, we cannot find a case that would support bringing criminal charges on these facts. All the cases prosecuted involved some combination of: clearly intentional and willful mishandling of classified information; or vast quantities of materials exposed in such a way as to support an inference of intentional misconduct; or indications of disloyalty to the United States; or efforts to obstruct justice. We do not see those things here.

Comey’s statement about intent was wrong, but how did Blumenthal know what the FBI Director would say two months early? Could it be that he to had connections to the FBI lovebirds Peter Strzok and Lisa Page? There is nothing to support that, but we do know that Strzok was working on changing Comey’s speech in May.

Three nefarious incident’s surrounding Hillary Clinton in recent years. Being the conduit of information from the Clinton camp and the dossier author Christopher Steele is a fourth.  You see, Sidney Blumenthal is not really a hitman, he is more of the Clinton fixer, and inventor of lies to cover-up their crimes and screw-ups, he will do anything to help the Clinton Crime Family, even if it involves making up stories and lying to the entire country.