Should Swalwell Be Punished For Presenting False Impeachment Evidence To Senate?

Rep. Eric Swalwell Presented Falsified Evidence-Shouldn't The Senate And The Bar Punish Him? 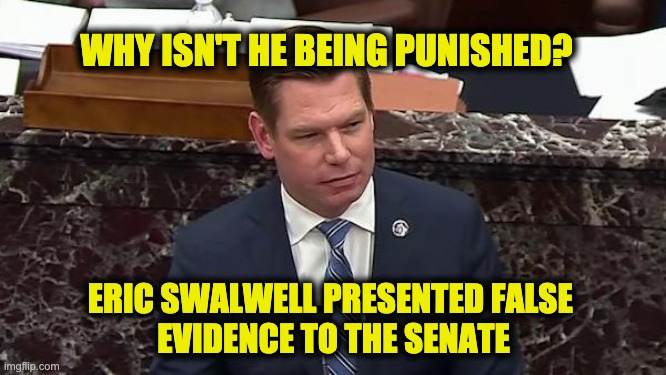 If a prosecutor gets busted falsifying evidence in a court, he pays the price. What Eric Swalwell (D-CA) tried to do was much worse. What price should he pay for it? A trained lawyer, Swalwell entered false evidence in the Senate to use the Constitutional tool of impeachment in the service of destroying a political rival. should swalwell be punished, should Swalwell be punished

We can even see a reason that might motivate him for faking that tweets were ‘verified.’

Just the News noted that Lawrence said in an interview on “The John Solomon Reports Podcast” that “if [Swalwell] entered that [tweet] into congressional testimony, it’s a verified account, and … it could be applicable in law. Secondly, he wanted to show that my Twitter account had more gravitas than it actually did. He wanted to show that the president was trying to use me to bring in the cavalry.”

To use terminology he would be familiar with, his actions have incited threats of violence against the woman he misquoted.

Lawyers offering bogus evidence in a regular trial would pay a steep professional price. Should Eric Swalwell not pay any price for abusing a Constitutional impeachment process?

Let’s look back at what it was Swalwell did. Unlike Swalwell, we will let the person he claims to be citing actually give proper context and explain what it was she was really saying, rather than squeezing it into a predetermined narrative. 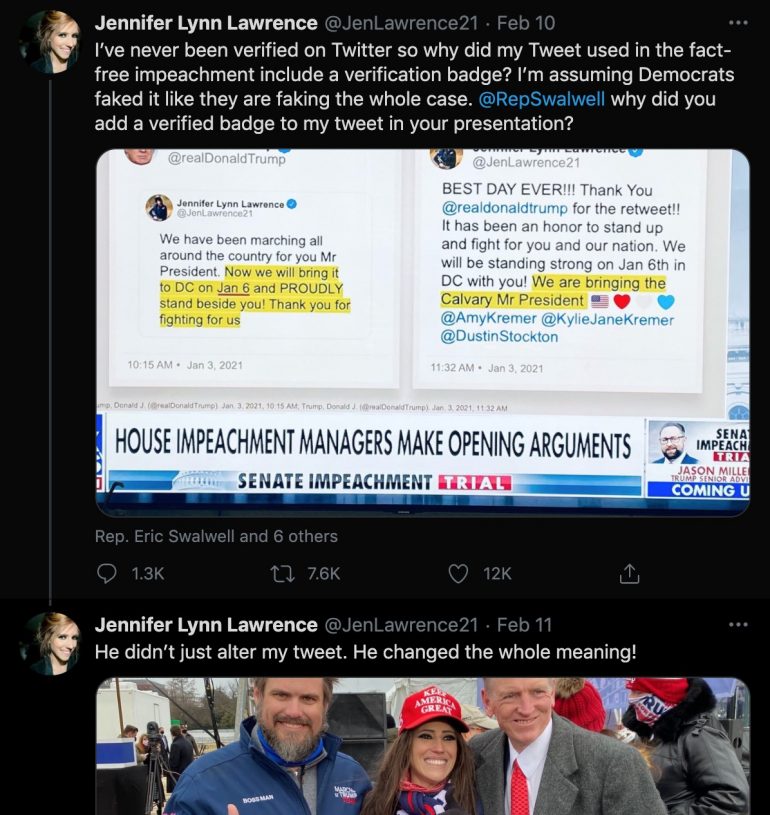 Here is an excerpt from Jennifer’s open letter in response to what was said about her.

Yesterday my safety and reputation came under attack during the impeachment trial because one of the Democrat House Impeachment Managers, Eric Swalwell maliciously changed both the appearance and meaning of one my Tweets during testimony on Wednesday.

Democrat persecutors have spun a conspiracy theory so absurd that the tweet displayed by Congressman Swalwell had to be altered physically by adding a verified badge and completely change the meaning by replacing a word with another similarly spelled word. Calvary is not the same thing as Cavalry no matter how much the persecutors want it to be so.

Here is the word I correctly used Calvary:

…Here is the word Eric Swalwell told the world I was using cavalry:

[Here she attaches a screenshot of a definition refering to the mobile army unit, whether on horseback or in helicopter]

…I don’t do horses ok(I’m from New York). I’m not in the army either so the use of the word cavalry would have been pretty stupid. It’s a wonder Congressman Swalwell didn’t pick up on it.

Bringing the Crucifixion of Jesus Christ (AKA the salvation of everyone) back to Washington DC was EXACTLY why we organized three successful protests on November 14, December 12, and January 5th. We believe our sacred institutions have rotted through with bloat and corruption PRECISELY because they have separated the State from God. — Read the rest on Substack

In a podcast interview with John Solomon and a pastor friend of hers, she explained further. She had been part of an open-air bus tour in support of Trump. The preachers among them had also given open-air gospel presentations and invitations to receive Christ. Her pastor friend saw the tweet and thought she had made a typo. Jennifer explained that the word choice was an intentional reference to her faith.

Notice the name of the group she was working alongside. This post went up long before she was drawn into the conflict. 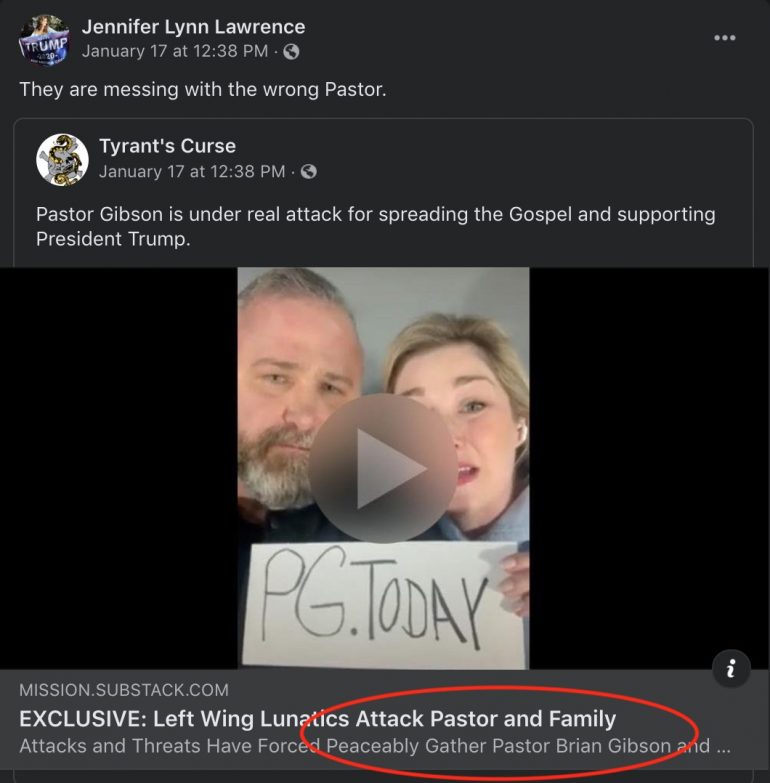 You might understand from Swalwell’s use of her tweet as evidence that she was somehow involved in the Capitol building’s security breach. Otherwise, his use of that would ring really hollow, right? The truth is that she saw the events the same way most other people did—on TV. She was nowhere near the events as they unfolded.

But her name was smeared, and she has had to hire security. Why?

Because there are activist groups that are more than happy to use violence and intimidation to achieve political ends. But we won’t see them featured on the news because reporting anything about THAT violent political group would advance the ‘wrong’ narrative.

Swalwell lied in the well of the Senate — which we’ve been told again and again is one of the most ‘sacred’ places in the Capitol. He slandered people and endangered the safety of a private citizen for personal, political gain.

Swalwell cares SO much about private citizens’ wellbeing that he mocked a woman who was threatened with rape for the ‘crime’ of having the wrong politics.

The Collins team got suspicious substances in the mail, hangers, junior staffers threatened with rape and violence, and her home doxxed.

Eric Swalwell said “boo hoo, where do you sleep.”https://t.co/feosk4EPb1

Hard to believe he can even say the word ‘incitement’ with a straight face. And he expects to go back to his life as though nothing happened when lawyers have been disbarred for less?

As Swalwell is a Californian, we looked at the California Bar rules, which say in part:

It is professional misconduct for a lawyer to engage in conduct involving dishonesty, fraud,* deceit, or reckless or intentional misrepresentation …A violation of this rule can occur when a lawyer is acting in propria persona or when a lawyer is not practicing law or acting in a professional capacity…A lawyer may be disciplined under Business and Professions Code section 6106 for acts involving moral turpitude, dishonesty, or corruption, whether intentional, reckless or grossly negligent.

Although I am not an attorney or play one on TV, a reading of California Bar Rules seems to suggest that Swalwell should be punished.  That’s on top of any punishment Senate rules suggest he should get for presenting false evidence.

While passing gas on the now extinct Chris Matthews show, Swalwell enjoying a longstanding relationship with a honeypot spy named Fang Fang, leading to the suggestion of a reality TV show called Fang Fang and Fart Fart. Now that he’s added to his resume that he’s been a House impeachment manager and submitting bogus evidence,  the Democrats still haven’t made him pay the slightest price for it. And, of course, the MSM is silent.