The Shot Heard Round The World 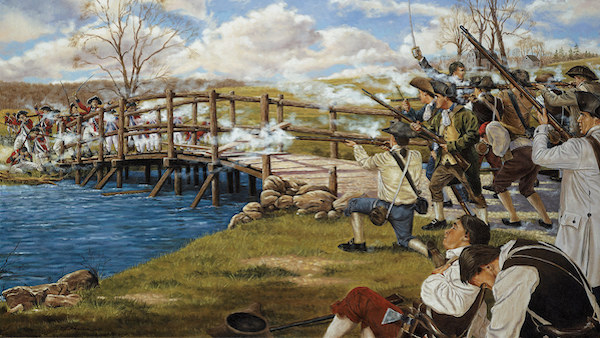 On April 19, 1764, the English Parliament banned the American colonists from printing paper money. Amid even more harsh restrictions over the next 11 years, including the Stamp Act, Townshend Act, the Sugar Act, the Boston Massacre, The Coercive Act, the Boston Tea Party, etc., as well as being forced to quarter British troops in their homes, the patriots among the colonists had enough. By the year 1775, on the exact same day, April 19, the shot heard round the world was fired in a battle with British troops at Lexington. The American Revolution had begun.

General Thomas Gage, the British Governor of Massachusetts, had already decided that Lexington was full of rebellion, and ordered a contingent of British troops to march against the rebels who had formed a “shadow government.” He wanted to capture John Hancock and Samuel Adams, who were thought to be in Lexington. He also had orders to seize a cache of arms and gunpowder believed to be in possession of the rebels. Yes, the American Revolution began when the British wanted to take our guns.

By the way, Paul Revere never shouted, “The British are coming!” The operation was meant to be conducted as discreetly as possible as not to alert the British troops who were hiding out in the countryside. Also, the colonists considered themselves to be British. The revolution didn’t start yet.  He might have warned that the “regulars,” a term the rebels used for the British army, were moving.

When the British arrived in Lexington, Adams, and Hancock had already fled to Philadelphia. There was no cache of arms to be found, but 77 militiamen were waiting in the middle of the town. British Major Pitcairn ordered the patriots to disperse. After a slight hesitation (probably because they were severely outnumbered), they slowly began to get off the town’s green. Suddenly a shot rang out from an unknown gun, and the battle was on. In the end, 8 Americans were dead or dying, and 10 others injured (some historical accounts say only 9). Only one British soldier was injured, but indeed, it was the shot heard’ round the world.

The Fight for Freedom Begins

The patriots who had been warned of the plan were positioned in Concord. And the tables were about to turn.

When the British troops reached Concord at about 7 a.m., they found themselves encircled by hundreds of armed Patriots.

A shot rang out – historians still debate who pulled the trigger. Nervous British soldiers then fired a volley, killing seven militiamen and mortally wounding another. Parker’s men fled, while the British soldiers moved on towards Concord, arriving around 8:00 AM.

And that was how the American Revolution began on April 19, 1775. The Colonists were longsuffering, as we have been. But there came a breaking point, one that started a 7-year war that created the freest country in the history of the world.

Sung at the Completion of the Battle Monument, July 4, 1837

By the rude bridge that arched the flood,
Their flag to April’s breeze unfurled,
Here once the embattled farmers stood
And fired the shot heard round the world.
The foe long since in silence slept;
Alike the conqueror silent sleeps;
And Time the ruined bridge has swept
Down the dark stream which seaward creeps.
On this green bank, by this soft stream,
We set today a votive stone;
That memory may their deed redeem,
When, like our sires, our sons are gone.
Spirit, that made those heroes dare
To die, and leave their children free,
Bid Time and Nature gently spare
The shaft we raise to them and thee.