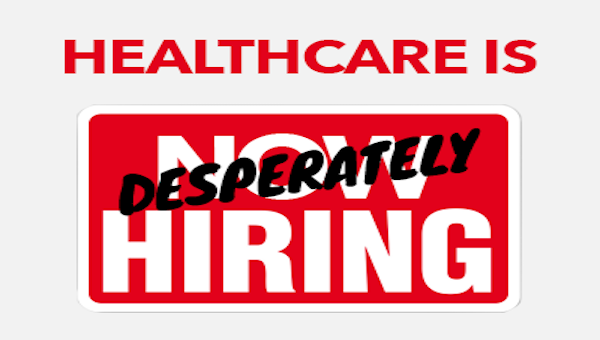 It didn’t have to be this way.  After sacrificing so much over the past couple of years, thousands of heroes of the COVID pandemic are now being forced to make a heartbreaking choice.  Either they will have to violate very deeply held convictions and beliefs, or they will have to give up their careers.  The way that our healthcare workers are being treated is utterly shameful, and it is a stain on this nation that will not soon be erased.  And thanks to these “mandates”, the next time you go to the hospital the lack of workers may mean that you don’t get the treatment that you desperately need.

We already had a shortage of healthcare workers before the pandemic came along, and this is something that I have written about multiple times over the years.  When COVID started sweeping across America, many healthcare facilities were absolutely overwhelmed, and there were some healthcare workers that couldn’t handle the pressure.  Many ended up leaving, and that resulted in the shortages getting even worse.

Of course, countless numbers of healthcare workers have been faithful to keep showing up for work day after day throughout this entire crisis, and now thousands upon thousands of them are being ruthlessly discarded.  Mandates that have been instituted by major healthcare providers, state governments, and the federal government are going to force the firing of countless numbers of COVID pandemic heroes.

I can’t even begin to describe how heartless this is.

And considering the fact that we are already experiencing shortages of healthcare workers all over the country, this appears to be a really, really foolish thing to do.  According to Fox Business, healthcare institutions all over America “are bracing for worsening staff shortages”…

Hospitals and nursing homes around the U.S. are bracing for worsening staff shortages as state deadlines arrive for health care workers to get vaccinated against COVID-19.

With ultimatums taking effect this week in states like New York, California, Rhode Island, and Connecticut, the fear is that some employees will quit or let themselves be fired or suspended rather than get the vaccine.

I really don’t know what leaders in these states are thinking.

You can’t just create more healthcare workers out of thin air.  It takes years of training to become a doctor or a nurse, and so you can’t just hire random people off the street to fill empty positions.

In many states, officials have no idea how they are going fill all of the empty positions that they are creating, but they are moving ahead anyway.  For example, this just happened in North Carolina…

A North Carolina-based hospital system announced Monday that roughly 175 unvaccinated employees were fired for failing to comply with the organization’s mandatory coronavirus vaccination policy, the latest in a series of health-care dismissals over coronavirus immunization.

Novant Health said last week that 375 unvaccinated workers — across 15 hospitals and 800 clinics — had been suspended for not getting immunized. Unvaccinated employees were given five days to comply.

In New York, a statewide mandate just went into effect, and hundreds of healthcare workers are on the verge of losing their jobs.

New York Governor Kathy Hochul appears to be a particularly delusional politician.  She says that she will steal medical professionals from other states to fill empty positions, and if that isn’t good enough she seems to think that she can just plug in members of the National Guard…

New York state officials are bracing for staffing shortages when the state’s health care worker vaccination mandate takes effect on Monday, and could be looking to the National Guard — as well as medical professionals from other states and countries — to help address them.

Gov. Kathy Hochul released a plan on Saturday, outlining the steps she could take to increase the workforce in the event that large numbers of hospital and nursing home employees do not meet the state’s deadline.

Needless to say, the biggest mandate is the one that is going to be instituted on the federal level.

The Biden administration is attempting to force 17 million healthcare workers that are employed by institutions that accept Medicare and/or Medicaid to be vaccinated.

Sadly, the Democrats are not backing down.

In fact, just look at what they are trying to sneak through in Congress…

Buried on page 168 of the House Democrats’ 2,465-page mega bill is a tenfold increase in fines for employers that “willfully,” “repeatedly,” or even seriously violate a section of labor law that deals with hazards, death, or serious physical harm to their employees.

The increased fines on employers could run as high as $70,000 for serious infractions, and $700,000 for willful or repeated violations—almost three-quarters of a million dollars for each fine. If enacted into law, vax enforcement could bankrupt non-compliant companies even more quickly than the $14,000 OSHA fine anticipated under Biden’s announced mandate.

These people are playing for keeps.

Earlier today I was reflecting on the events of the past couple of weeks, and it made me very sad.

There is no going back.  Very dark times have arrived, and there is no light at the end of the tunnel.

I know that sounds really bad, but I’m not going to sugarcoat things for you.

Of course, a lot of you are going to have to move out of the states that you are living in right now entirely.

Sadly, there isn’t anywhere that you can go inside this country to escape the federal mandates.

And all over the nation, we are going to see very serious shortages of healthcare workers.  As our healthcare institutions are flooded by the incapacitated and the dying, there simply is not going to be enough people to treat them all.

It is going to be a complete and utter nightmare, but as I said in the opening paragraph, it didn’t have to be this way.