Longtime Cheney Supporter On Liz: She’s DEAD To Me

Cheney Supporter She’s DEAD To Me 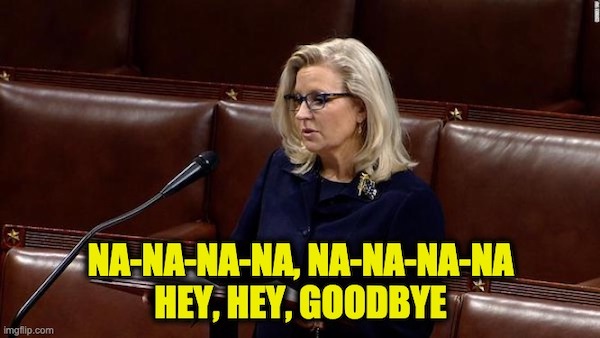 She’s dead to me

On Tuesday, August 16, Wyoming voters will decide the fate of Liz Cheney, the alleged “Republican” who supposedly represents the good people of that state in the House of Representatives. But her zealous and unhinged hatred of former President Donald Trump, and her time on Nancy Pelosi’s sham partisan January 6 committee, have caused many Wyoming residents to turn against her.

“She’s dead to me,” 53-year-old Jackson native George Dykes told Politico. According to the report, Dykes “supported the Cheney family for years and recalled seeing former Vice President Dick Cheney’s daughter walk into the office of former Sen. Craig Thomas (R-Wyo.), where he once worked.”

Cheney’s message during the primary has basically been, “I hate Trump, and my constituents are crazies who don’t support the Constitution.”

Her hatred of Trump is so unhinged that she enlisted her father, former Vice-President Dick Cheney, to appear in an outrageous ad calling the former President a “coward” and a threat to America.

Breitbart noted that the ad “did not mention the state of Wyoming but mentioned Trump six times.”

Cheney is now so desperate that she’s begging Democrats to cross party lines to interfere in the GOP primary and vote for her — a legal move, even if it may seem unethical.

“There’s not much about the Cheneys that I care for,” 75-year-old Democrat Bryan Tarantola told Politico. “But her opposition [to Trump] would tell you that Liz is displaying Wyoming values. Liz is showing honesty, integrity, and courage — which I always thought were traditional Wyoming values. At least they were in the Wyoming in which I grew up.”

Got that? Cheney is banking on fellow Trump-haters in the Democrat Party to push her to victory. In a GOP primary. Will it work? In a state that went 70 percent for Trump? Personally, I doubt it.

Money from outside of the state has flowed into the race to help Cheney. In contrast, Hageman has done quite well with Wyoming voters, who have donated more than $1.2 million — more than four times what Wyoming voters have donated to Cheney, FEC data shows. Overall, Cheney has outraised Hageman by nearly three to one.

Meanwhile, Harriet Hageman’s campaign has slammed Cheney for ignoring Wyoming voters. “She’s made her time in Congress and this election all about her,” a Hageman ad reads. “Well, it’s not about her. It’s about you. Wyoming deserves a voice in Congress to fight for our values, our way of life.”

Breitbart News reported on Sunday that Cheney’s husband, Philip Perry, is a partner at a law firm that represents Hunter Biden in the Department of Justice’s grand jury probe regarding “tax issues.” As a partner, Perry holds between a $1,000,001 and $5,000,000 stake in the firm, Latham & Watkins, according to Cheney’s 2020 Personal Financial Disclosure. Perry’s fellow partner, Chris Clark, represents Hunter Biden in the “grand jury investigation regarding tax issues,” his company biography says.

Based on those numbers, it seems Cheney is about to find herself unemployed once the voters of Wyoming have their say.