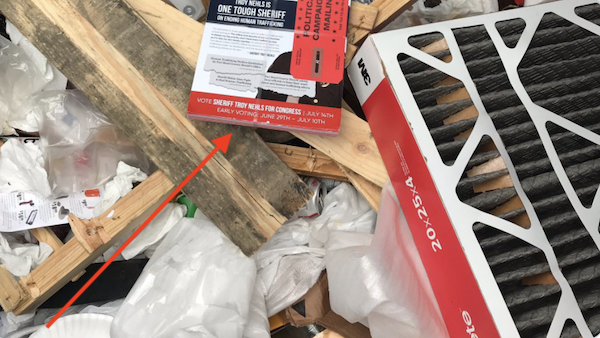 On Friday, Fort Bend County Sheriff Troy Nehls posted a video to Twitter that shows a postal worker dumping a stack of his campaign mailers in a dumpster.  Nehls is running for the Republican nomination to House of Representatives in Texas’ 22nd Congressional District as a Republican. The incumbent Pete Olson (R) is retiring  A runoff GOP primary election between Nehls and Kathaleen Wall is scheduled for July 14 in this R+10 district.

In the video below, the driver is seen pulling up to the dumpster, getting out, and throwing something in the trash. Nehls said the person attempted to hide the mailers before discarding them.

“A US Postal worker was just caught on video throwing a stack of my campaign mailers in a dumpster. Some patriots nearby heard a noise when she tossed them in & went to investigate. They found a stack of them and called me. No wonder people are skeptical of mail-in voting,” he said on Twitter.

Here’s the video he posted:

A US Postal worker was just caught on video throwing a stack of my campaign mailers in a dumpster. Some patriots nearby heard a noise when she tossed them in & went to investigate. They found a stack of them and called me. No wonder people are skeptical of mail in voting. pic.twitter.com/I28SBydg2N

Within minutes, Nehls said he visited the business to retrieve the mailers.

As one person noted:

That is mail tampering. Mail tampering is a federal law. What was this postal workers name? I’m sure the individual could be identified based on description/location. Do mail trucks have a gps tracker? I expect a prosecution regarding this federal crime.

Yes, this is a felony. But we can’t help but wonder if this person will manage to get off since laws only seem to apply to one side these days.

Nehls says his campaign relies on mailers because he can’t afford television commercials.

We’re running a grassroots campaign and don’t have money for TV. I rely on mailers to reach voters and it’s sad to see a federal employee interfering with that. If you’d like to pitch in a few dollars to help our campaign reach more voters, click here: https://t.co/don9ppUfvl

The Houston Chronicle endorsed Nehls for the runoff election. Those interested in supporting Nehls’ effort can check out his campaign site here.

Incidents like this, by the way, are part of the reason many do not trust the idea of mail-in voting.