Sheriff David Clarke Cracks Down on Illegal Immigration, Liberals Have A Cow 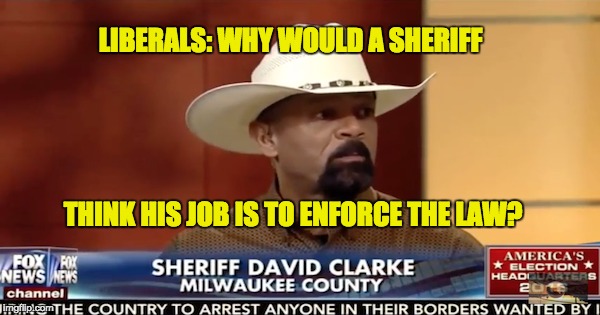 Apparently, liberals have become so deranged that they now protest when the law enforcement officers they hire, such as Sheriff David Clarke, try to enforce the law. I’m not kidding.

The latest example of this precious bit of liberal insanity comes to us from Milwaukee County where the brilliant (and very popular) Sheriff, David Clarke, was recently forced to face down a liberal protest after announcing that his officers would enforce our nation’s laws.

Here’s what started the whole mess:

AP reporter inquiry:
Does Sheriff Clarke plan to enroll the sheriff’s office into the portion of the 287G program in which local law enforcement officers will be deputized by the federal government to function as immigration officers, helping with investigations and the detention and apprehension of immigrants?

Yes I will. President Trump made it clear with his Executive Order on enforcement of our immigration laws. No more catch and release of criminal illegal aliens. I will assign as many deputies to this initiative as I can. It is a public safety priority. I will not have a Kate Steinle-type incident happen in Milwaukee County. I am obligated to protect people from criminal illegal aliens as I am from all criminal predators.
I cannot be more clear on this.

So, first the question – ‘Does Sheriff Clarke plan to take part in the President’s immigration enforcement program?’ Then the answer, ‘Yes.’ 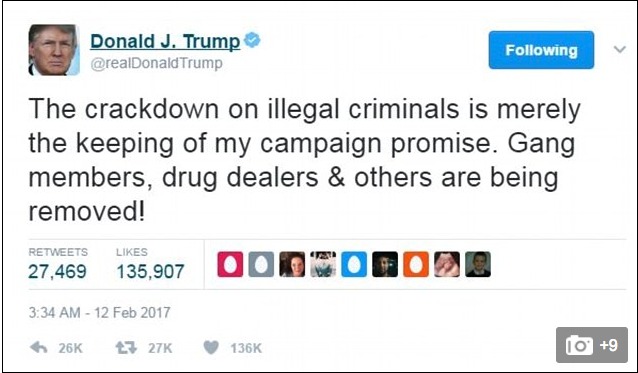 This simple response, clearly stating that, of course, the Sheriff would abide by the law, led to thousands of protesters marching on the streets in Wisconsin.

Thousands are marching in Milwaukee from Voces de la Frontera headquarters in Walker’s Point to downtown Milwaukee for Day Without Latinos, Immigrants and Refugees.

Local organizers have asked that as many immigrants as possible take part with a direct message they want to deliver to Milwaukee County Sheriff David Clarke. Hundreds of immigrants from across the state are taking off from work and school to participate in the event…

The march is also part of the bigger debate on the immigration policies of President Trump.

For his part, Sheriff Clarke told the marchers that he would not be able to attend their rally due to a previous work engagement.

“Please accept my regrets. I will be working with agents from Immigration and Customs Enforcement helping them identify criminal illegal aliens and therefore cannot attend your rally being held for me.”

Sheriff Clarke then responded more seriously, and directly to the complaints of liberal anti-border globalists.

The U.S. is a sovereign nation with borders that have to be enforced and protected. According to the US Constitution, the CONGRESS has the authority to set lawful immigration rules, not a mayor, a governor, a city council or county board. Nobody has a RIGHT to come to the U.S.

You can however make a REQUEST to come here through our immigration service.

The U.S. has an interest in controlling its borders for many reasons, chief among them are for 1) national and domestic security reasons, 2) to prevent the spread of infectious diseases e.g. H1N1 flu, Ebola, and 3) to control the number of another failed nation’s refugees which would overwhelm America’s limited public services.

There must be a zero tolerance for allowing people to illegally enter this country and establish permanent residency.

We finally have a President who has a sense of urgency about faithfully defending our borders and I am going to help as outlined under an Executive order for the Immigration and Customs Enforcement Agency to partner with local law enforcement.

Every American should be grateful that we still have brave men and women like Sheriff Clarke fighting to uphold the Constitution and defend the rule of law. We need more leaders like this who will do what is right, no matter how unpopular doing right becomes.