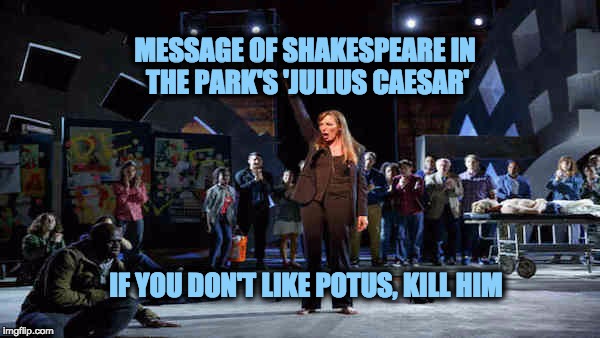 For years the liberal media (and many of their friends in politics) have attacked Republicans for using any rhetoric that could be remotely connected to violence. Whether it’s words like “taking aim,” or “hunting,” or “firing the first shot,” or “fighting for you,” liberals love to use these words against Republicans and argue that they are “inciting” violence. However, when Democrats literally use violence – whether during protests to shut down conservative speech, or in dramatized form like Kathy Griffin – liberals are suddenly unconcerned about violent rhetoric.

You’d have thought that liberals had learned their lesson after watching rapper Snoop Dogg “shoot” a version of the President (dressed as a clown), or Kathy Griffin’s faux-beheading of the President… but no, they’ve learned nothing. How do we know? Because this year’s supposedly a-political Shakespeare in the Park (in Central Park, New York City), dramatizes a very intense, and very graphic scene wherein President Trump gets murdered.

Take a look at @PublicTheaterNY's first Shakespeare in the Park production of 2017, a Trump-inspired Julius Caesar https://t.co/iTPiJMSSaq pic.twitter.com/t5VfDfZVRe

Mediaite spoke to Laura Sheaffer who works for Salem Media and was at the Saturday evening performance of Julius Caesar. Sheaffer told Mediaite “The actor playing Caesar was dressed in a business suit, with a royal blue tie, hanging a couple inches below the belt line, with reddish-blonde hair — just like Trump.”

Sheaffer added that she “always” attends Shakespeare in the park and that the script was mostly loyal to the original play but the intent to compare Donald Trump to Julius Caesar was “obvious.” She also noted that the actress playing Caesar’s wife, Calpurnia bore a resemblance to first lady Melania Trump and even spoke with a “Slavic accent.”

Three scenes struck Sheaffer as incredibly disrespectful; in the first Caesar (as Trump) steps out of the bathtub completely naked. Then Caeser (Trump) is murdered by a gaggle of Senators “They had the full murder scene onstage, and blood was spewing everywhere out of his body. To be honest I thought it was shocking and distasteful,” Sheaffer added. “If this had happened to any other president — even as recently as Barack Obama or George W. Bush — it would not have flown. People would have been horrified. I mean it was the on-stage murder of the president of the United States.”

Finally, the play ends with the character of  Marc Antony celebrating Brutus for his willingness to murder Caesar, which Sheaffer said send a terrible message. “The message it sent was that if you don’t support the president, it’s ok to assassinate him. I don’t love President Trump, but he’s the president. You can’t assassinate him on a stage.” Sheaffer wondered how anyone could think that this was okay? “Kathy Griffin got so much coverage for what she did, everyone was horrified, so why is no one horrified by this, which is essentially the murder of the President of the United States in front of 2,000 people?”

Anyone who thinks that any kind of comparison can be made between Julius Caesar and Donald Trump is an utter fool, but Sheaffer is right, celebrating the murder (as noble) of a man that you are comparing to the President of the United States is disrespectful and sends a terrible message. Are the people who put on Shakespeare in the Park arguing that if someone were to murder the President they should be hailed for defending the United States, as Marc Antony hailed Brutus for defending Rome? I truly doubt it.

While the decision to depict Trump as Caesar may resonate with liberals (even though Trump has done nothing to deserve the treatment), it’s an ugly and dangerous choice for the producers to make.