Is This A Hate Crime? 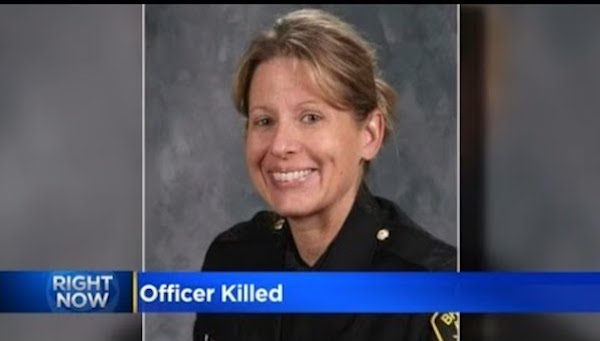 You know that if the roles were reversed, there would be wall-to-wall coverage of “systemic racism” among law enforcement officers. Sgt. Marlene Rittmanic

If you listen to the Corporate Media, every single negative interaction when the cop is white and the suspect is black is due to racism regardless of what the suspect was doing at the time. It’s clearly a “hate crime.”

But when the perps that shoot cops are of one race and the officers are another, there’s not much mention of racism. Weird, that.

Bradley, Illinois Police Sgt. Marlene Rittmanic, 49, was shot and killed with her own gun and her partner, Officer Tyler Bailey, 27, is fighting for his life in the hospital.

On December 29, Sgt. Rittmanic and Officer Baily responded to a complaint that dogs were barking at an abandoned car at a Comfort Inn. When they ran the plates, they found that the car belonged to Darius Sullivan, 25.

The Daily Mail reports that Sullivan had been arrested 21 times since 2014 and had an outstanding bench warrant for battery.

According to court documents, Bailey knew that Sullivan was wanted on the bench warrant and that he had previously run from police when they tried to arrest him.

The two officers knocked on the hotel room door where Sullivan and 26-year old Xandria Harris were staying. Harris kept telling the officers that she was getting dressed and when she finally opened the door, she tried to wedge her way out and close the door shielding Sullivan from view.

The officers repeatedly told her to move out of the way when Sullivan emerged with a 9mm handgun equipped with a drum clip. He shot officer Bailey in the head at point-blank range.

Rittmanic tried to escape down the hall but was chased by Sullivan. He shot at her and his gun jammed. He tried to disarm Rittmanic with his left hand and unjam his firearm with his right hand and mouth.

Harris then ran down the hall toward the struggle and at Sullivan’s urging, helped to disarm Rittmanic. Sullivan then shot the officer in the head with her own service weapon.

After a 36-hour manhunt by U.S. Marshals and a SWAT team, Sullivan was captured on Friday at a home in North Manchester, Indiana, near Fort Wayne.

In court on Monday, Kankakee County State’s Attorney Jim Rowe painted the picture of a cold-blooded killing that deserved that designation during a bond hearing for Xandria Harris, 26, of Bradley in the county’s Circuit Court.

She and Darius Sullivan of Bourbonnais 25, are charged with fatally shooting Bradley police Sgt. Marlene Rittmanic, 49, and critically wounding her partner, Officer Tyler Bailey, 27, late Wednesday. Bailey is hospitalized at a Chicago-area hospital.

Sullivan was wanted on a bench warrant, according to court documents, and he had previously run from Bradley police officers trying to arrest him.

‘At the time Sullivan fired the fatal shots into Sgt. Rittmanic, Sgt. Rittmanic was pleading with them to just leave, “you don’t have to do this, please just go, please don’t please don’t.” She was desperately pleading for her life,’ Rowe said, according to court documents.

Here are some local reports about the shooting and the capture of the suspects:

Two suspects were involved in the point-blank shooting of Sgt. Marlene Rittmanic with her own weapon while she begged for her life.

Sgt. Marlene Rittmanic died in the line of duty by some career criminal who had no problem shooting cops in the head.

He deserves the death penalty.

There needs to be an end to the anti-cop rhetoric spread by the Corporate Media and the leftists who want to “reimagine”, defund, or outright abolish the police.

There is a difference in legitimate criticism of individual cops and the broad brush that the left tends to do about the entire criminal justice system.

It’s dangerous enough out there for law enforcement officers and the constant drumbeat of all cops as racist tools implementing “white supremacy” or whatever B.S. the wokescolds are shoveling. That kind of crap only emboldens those who want an excuse to target cops.

The people that want to go out there and shoot cops are not the good guys. They also, strangely enough, tend to have rap sheets as long as your arm.

What a weird coincidence.

Perhaps the left should consider who it is that they’re advocating for.