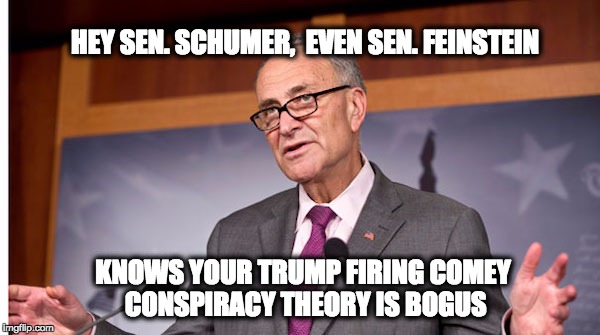 By Onan Coca And Jeff Dunetz

Hey Senator Schumer…push up your glasses and read this. Chuck Grassley (R-IA) and Diane Feinstein (D-CA) both agree that there is nothing to contradict what the president said about Comey telling him was not under investigation. In other words Trump did not fire Comey because the president was under investigation–he fired Comey because in his opinion Comey was doing a lousy job.  Feinstein’s agreement that Trump wasn’t being investigated proves once again the conspiracy theories you keep spewing are nothing but an attempt to divide the country Shame On You.

On Tuesday, President Trump fired FBI Director James Comey and in his letter letting Comey know that he was being fired, Trump mentioned that Comey had told him on three separate occasions that he was NOT being investigated. Nevertheless, the first thing the liberals and the media (yes that’s redundant)  did upon hearing that Comey had been fired was to speculate that Trump had done so because Comey and the FBI were investigating the President’s connection to Russia!

It matters little to the media or to the Democrats they are helping that our intelligence agencies have been investigating these issues for well over a year, or that the evidence is building that the Obama administration had been spying on the Trump team for the last year, or that neither of them have been able to dig up a single shred of evidence to back up these dastardly insinuations. No, what matters more is “narrative.” The liberal politicos and the media has a narrative to sell, so they continue to pretend that every action taken by the President, and every word spoken by the President is somehow signaling a much deeper and darker conspiracy that they’ve yet to discover.

On Thursday, two of the most senior Senators in Congress spoke out in defense of the President and in admonishing the FBI. What makes their comments even more compelling is that the two Senators are from opposing parties and both were in agreement about the ongoing fiasco and the need for the FBI to finally speak out and put the matter to rest.

Senators Chuck Grassley (R-IA) and Dianne Feinstein (D-CA) both spoke out at the start of their Thursday committee meeting supporting comments made by President Trump throughout this past week.

“Shortly after Director Comey briefed us, I tweeted that he should be transparent. I said he should tell the public what he told Senator Feinstein and me about whether the FBI is or is not investigating the President,” Grassley said. “On Tuesday, the President’s letter said that Director Comey told him he was not under investigation. Senator Feinstein and I heard nothing that contradicted the President’s statement.” Finally Grassley called on the FBI to “confirm to the public whether it is or is not investigating the President, because it has failed to make this clear, speculation has run rampant.”

Senator Feinstein agreed with Grassley’s comments saying “Thanks very much Mr. Chairman. I very much appreciate what you said and it’s very accurate. We were briefed, and the nature of the briefing was a counterintelligence and criminal investigation that the FBI who is carrying out and more than that, I will not say either.”

Grassley’s comments on Comey, the FBI, and on the Russia investigation begin about 2:15 into the video below, and Feinstein’s come near the end of the video:

Here it is folks. We now have confirmation from the President and Senators from both parties agreeing that the FBI is NOT investigating President Trump for any criminal activity. Can we please just put the constant media conversation about President Trump’s supposedly “nefarious” dealings behind us? If there was any “there” there, the FBI would be investigating it. The fact that they have nothing to investigate after more than a year of watching the Trump campaign and transition teams… should speak volumes about the truth. President Trump did nothing wrong and the Democrat Party has been grasping at Russian straws for MONTHS in an effort to explain how their favorite candidate could have possibly failed so miserably, and to side-line the GOP Agenda.

I have a dream that one day Senator Chuck Schumer will care more about the future of the United States, and New York, the state he supposedly represent, than he cares about the future of the Democratic Party. Yeah I know,  its much more likely that news media such as the Washington Post, CNN, and the New York Times, will lose their bias and become fair and balanced, but I can dream it can’t I?