Is Senator Pocahontas In Danger of Becoming Princess OutOfaJob? 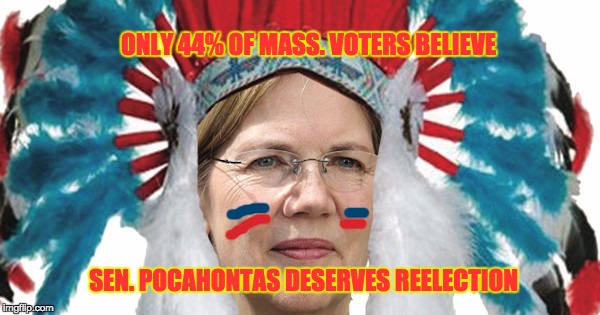 Senator Elizabeth Warren (Pocahontas),  has become a leader of the far left populist movement of the Democratic Party, but it seems as if her Massachusetts constituents are not impressed.  A new poll by WBUR-FM the Boston National Public Radio station, only 44% of Massachusetts voters believe Warren deserves reelection, 46% believe voters ought to “give someone else a chance.” The margin of error is plus or minus 4.4%.

There is plenty of time for her to turn the numbers around as Warren doesn’t have to put on her political war-paint until 2018. It also depends on who runs against her.

On the other hand Massachusetts Governor Charlie Baker, who would also have to run for reelection in 2018 is doing much better, only 29 percent of Massachusetts voters think someone else should get a chance at the governor’s office.

The poll results seem a bit crazy, after all Massachusetts is a very Democratic Party state, but it is the Republican Governor doing much better than the Democratic Senator.

Steve Koczela, president of The MassINC Polling Group that conducted the survey for WBUR, offers a compelling rationale:

When she was elected to the senate, Warren promised she would smoke the peace pipe with Republicans:

She extended an olive branch to her opponent’s supporters, tempering her feisty middle-class populism with a dose of conciliation: “I understand that there was a message for people who voted for Senator Brown. I think a lot of them were saying, ‘you’ve got to be willing to reach across the aisle,’” explained Warren. “I want them to know I heard that loud and clear, and it’s what I want to do – I don’t want to go to Washington to be able to say, ‘whoa, I’m a senator.’ I want to go to Washington because I want to help get something done.

But instead, Senator Pocahontas has become arguably the Senate’s most extreme liberal partisan, more interested in advancing that extreme left-wing agenda than getting anything done for the State she was elected to represent. Perhaps that partisanship is not sitting well with the Massachusetts voters.

It is rumored that Warren is considering a run for president in 2020, it looks as if she needs to concentrate on re-election first.