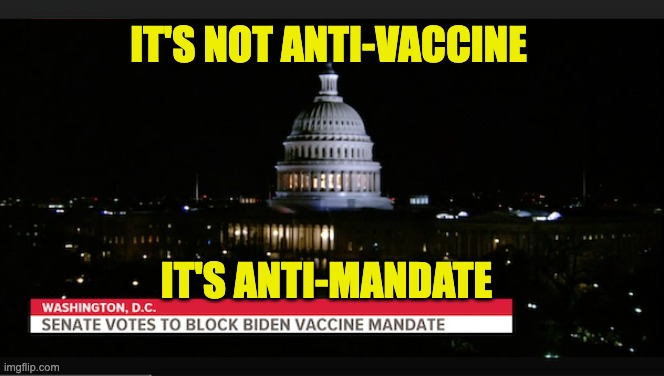 The Senate voted Tuesday night on a bipartisan basis to reject President Joe Biden’s vaccine mandates for private employers. Two Democrat senators, Joe Manchin (W.Va.) and Jon Tester (Mont.), voted with every Republican in support of a formal challenge against President Biden’s vaccine mandate under the Congressional Review Act (CRA), which is the official process for Congress to eliminate an Executive Branch rule.

Sen. Mike Braun (R-Ind.), who sponsored the CRA, said Biden’s mandates have Main Street America scared. “My phone has been ringing off the hook,” Braun said in a news conference before the vote. “When I went back home to Indiana, I was getting calls, texts, and stopped everywhere I went with people asking, ‘What is happening with these mandates?'”

Sen. John Barrasso (R-Wyo.) said in the news conference, “Remember when Joe Biden ran for president hiding in his basement, and he promised he would be the cure for COVID, ‘Elect me and everything will be fine?’ He isn’t. It isn’t. He is guilty of medical malpractice. I am a doctor. I am pro-vaccine, but I am anti-mandate.”

Sen. Dan Sullivan (R-AK) noted that every aid bill Congress passed to help the nation get through the pandemic required employers to keep employees. “That was the law,” Sullivan explained. “This president has taken a sledgehammer to that principle. So many people are at risk of being fired right now, police, firemen, oil and gas workers, defense contractors, the ones we were begging to stay on the job to keep our economy moving.”

Sullivan added that “We all want to get through this pandemic and put it in the rearview mirror. But it needs to be based on the Constitution, the law, and as we are seeing right now, every court that looks at these, the federal mandate, the OSHA mandate, is saying it is neither.”

Quoting one of the recent federal court rulings challenging the mandate, Sen. Cynthia Lummis (R-Wyo.) said at the news conference, “Mr. President, this mandate is ‘fatally flawed.’ I hope the executive branch will reverse course.”

In the press conference, Sen. James Lankford (R-Okla.) said, “The President of the United States cannot reach into every company and pick and choose who he wants to be hired and fired. And when I talk to employers in my state in Oklahoma, the most difficult issue they’re facing right now is the potential that they’re going to have huge fines in their company if they don’t fire critical workforce that’s in their company.”

According to the Hill, Senate Majority Leader Charles Schumer said Tuesday he isn’t worried about a few Democratic defections on the vaccine mandate.

“The position to me is pretty clear, and that is that the more people that are vaccinated, the safer America will be, and we should encourage everything we can do to do it. That is the overwhelming view of the president and of the vast majority of Democrats,” he said.

The CRA passage in the Senate sets up a battle in the House, where Republicans plan to circulate a discharge petition to force Speaker Nancy Pelosi to schedule a vote on the resolution.

Tester on Tuesday said he was not a fan of vaccine mandates for private employers even though he supports mandates for health care workers and members of the military.

“The basis of my decision is we don’t like mandates, and quite frankly, I heard a lot from my business community that they didn’t like – workability was bad,” he said.

Manchin announced last week that he would vote for the Republican resolution, even though he just voted to defeat an amendment to a short-term government funding measure that would have barred the use of federal funds to implement Biden’s vaccine mandate.

Braun said there’s a good chance House Republicans will get enough signatures on a discharge petition to force a floor vote in that chamber.

Braun suggested that every Republican would sign the petition, “so I think we just need five or six Democrats over there” to sign it.

Braun noted, “there are 30 [Democrats] in swing districts that are going to have to” take a hard look at signing the discharge petition.”

Ultimately, the CRA has to be signed into law by President Biden to nullify his vaccine mandate on private employers, something White House Press Secretary Jen Psaki said will never happen.

“Our view and the view of many Americans is that if people aren’t vaccinated, having them test once a week is quite reasonable as we’re thinking about how to protect our workplaces, how to protect stores and retail locations as people are out shopping for Christmas and the holidays, how to protect schools and public places. And we also know that more than 100 leading public health experts have endorsed this rule,” she said.

“If it comes to the president’s desk, he will veto it,” she added.

And that put Democrats in a hard place. None of them want to face the voters a year from now and be blamed for voting for a mandate that could cost millions of Americans their job.